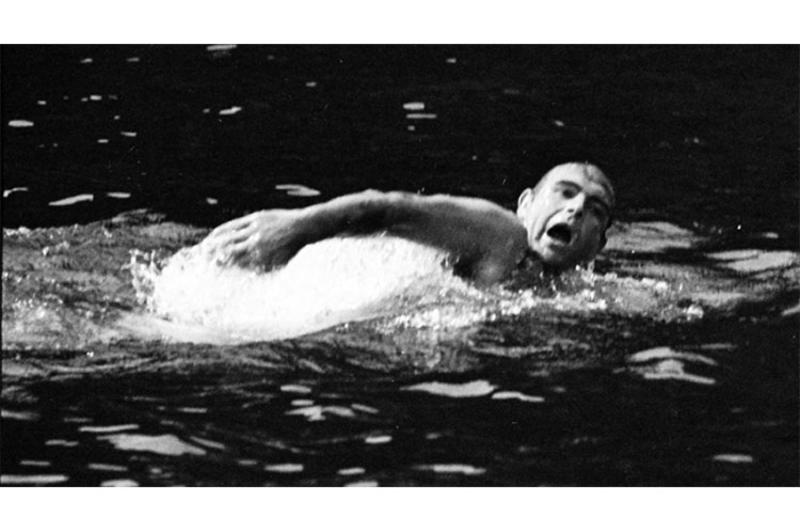 Sean Connery, out for a swim during the filming of ''You Only Live Twice.''

The tiny fishing village of Akime, on the southernmost tip of Japan, will never be the same.

James Bond and company have descended upon it via helicopters, buses and air-conditioned cars. They have a mobile snack bar (sandwiches, lime juice, tea and water) and a built-in-a-bus restroom on the set at all times.

And when superstar Sean Connery, sans trench coat, tricky attache case and made up to look like a Japanese fisherman, strides unsmilingly toward the camera, he is besieged by a battalion of Japanese photographers.

The film, loosely based on Ian Fleming's Japan-laid "You Only Live Twice," is creating more controversy among the Japanese press than any flick ever filmed in the land of cherry blossoms and automatic bows.

Although Tetsuro Tanba (as detective Tiger Tanaka), Mie Hama (as Kissy Suzuki) and Akiko Wakabayashi (filling a write-in role as a sort of female Bond counterpart) all have received their share of attention, it's the rugged Connery — the biggest boxoffice attraction in the world today — who has caused the most excitement.

The Japanese press — en masse — has submitted formal complaints to publicity people and co-producer Albert "Cubby" Broccoli because they don't feel they are getting enough photographs or personal interviews with the star.

Although the straw hat sales and the amount of beer peddled across the counter in Akime's only hotel have skyrocketed, the villagers are only mildly impressed.

Fishing nets them several million yen a year and on weekends they always attract at least 300 fishermen and swimmers a day.

But there's one thing they all have in common. Just say "007" to any Japanese in the vicinity and he's bound to break into a great big grin of acknowledgment.