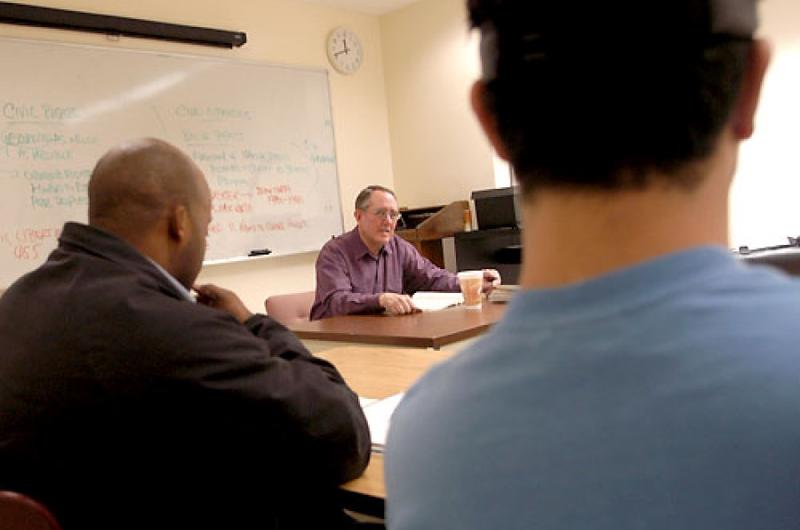 Sailors pursue higher education during their lunch breaks through a midday course at Yokosuka.

Whether a servicemember plans to get a degree on active duty or would rather hit the books full time on the outside, each branch of the military can bridge the gap to higher education.

Degree routes go one of two ways: traditional and nontraditional.

Traditional means hitting the books, attending class and earning credits. Overseas, schools such as the University of Maryland, Troy State University and Central Texas College offer courses on base in a variety of subjects, all geared toward earning an associate’s, bachelor’s or master’s degree.

Nontraditional methods include anything that doesn’t involve sitting in a classroom. Distance-learning courses online, college-level examination program tests and evaluating military experience are the usual methods.

Each way has its own merits, according to Jon Richardson, director of the Navy College office at Yokosuka Naval Base, Japan.

“Some students look on a schedule and if they don’t see the class they want being offered here, they’ll look for it as a DL class,” Richardson said.

In class or online?

Richardson said it’s always preferable to have a classroom situation where students can get all their questions answered immediately. Other education officials agree that students are more receptive to traditional classes.

“We have had luck conducting classes during noon time and we get lots of support from commanders,” said Sam Salmeron, education services officer for Area IV, based at Camp Henry, South Korea. “Most soldiers get an hour and a half for lunch, and they’ll take an hour and 15 minute classes. It’s another opportunity for the soldier to take classes.”

Weekend and evening classes are also available at many locations, Salmeron said.

“You don’t have interaction with the instructor, nor other classmates,” she said. “A lot of people think they are cut out for distance education, but not everyone has the diligence to go through a course. They need the interaction and instructors urging them on.”

SOC-ing it to traditional means

An even more nontraditional method is testing out of classes. Richardson said there are three types of examinations: the College-Level Examination Program; the Defense Activity for Non-Traditional Education Support Subject Standardized Tests; and the Excelsior College exams. Except for the Excelsior tests, the exams are free to servicemembers.

“If we have it in stock, they can call us and take the exam the same day,” he said, referring to Yokosuka’s CLEP exams.

Most schools will accept a certain number of these tests as part of a student’s overall degree program. Richardson said they can cut a significant amount of time out of the pursuit of a degree.

“The original thinking on that is, if you’ve got the knowledge already, why spend the money and the time to take a class about something you already know?” Richardson said.

Corralling all those stray credits together into a cohesive degree program is made even easier with the Servicemembers Opportunity Colleges program. Created in 1972, SOC provides a method for servicemembers to fuse their college experiences with their vagabond lifestyle. Today, SOC consists of more than 1,550 colleges and universities, according to the program’s Web site. SOC coordinates associate and bachelor’s degrees in a variety of curriculum areas for the Army, under SOCAD; Navy, with SOCNAV; and Marine Corps, using SOCMAR. Member schools agree to accept each others’ credits in transfer.

Each service also has unique programs aimed at a servicemember’s unique situation.

For sailors aboard ships, classes taught at sea, called Programs for Afloat College Education, teach many lower-level courses, either by an instructor embarked on the ship, or by technology-based methods, Richardson said. The courses are free, although students must pay for books. Marines designated as “ship’s company” are eligible; however, Marines embarked on the ship cannot participate.

“It was designed with the shipboard guys in mind,” he said. “They would like to attend classes when they’re ashore, but their ships are going in and out of port. They have that option.”

“It’s really a starter for people who have never taken any college coursework,” she said. “They receive credit from their Air Force schools.”

Because the program is fully accredited in the United States, Wilson said, they can take the college credit the technical schools translate into and apply it with general education credits they can earn from a college or university. These schools also use the ACE criteria. It will enable airmen “to complete an associate of applied science degree by taking their general education classes, like math, English and science, at a school here like the University of Maryland.”

“They have to go to a tech school anyway,” she said, “so it’s kind of a head start.”

“Any Army courses they’ve taken they can get a transcript from Fort Leavenworth that indicates credits they should get,” he said. “In most cases, [schools] will award the credits recommended.”

He said classes that are military related, such as physical training, are usually covered by schools or boot camp. A soldier’s Military Occupational Specialty determines what they can expect to have covered.

“Come in and talk to us. We can look at their courses and tell if they are accredited,” he said.

Salmeron said people’s changing priorities, duty stations and needs of their service give a wide range to how long it would take a servicemember to earn a degree.

He estimated around six years.

“If you took two classes every term, you can graduate with a bachelor,” he said. “You can do it in four years, but that’s pushing it, because you also have a full-time job.”

Even if a servicemember plans on getting out of the service to attend college full time, Salmeron said those chances to chip away at courses really add up.

“We like to point out to soldiers that in a one-year tour, they take two classes per term, they can walk away from here with one year of college,” Salmeron said.

But just attending classes is no guarantee of success.

“Soldiers have to juggle a 40-hour work week with homework and preparing for classes,” Salmeron said. “They need to be sure they not only have enough time to attend class, but to study.”

That’s where distance education, classes taken by video, computer or correspondence course come in. They allow flexibility on when and for how long students tackle subjects.

“They can do it at 2 in the morning if that’s the best time for them,” Salmeron said.

But with distance education, Salmeron warned, “you have to be aware of the fact there’s a lot more self-motivation, self-discipline to be successful in a distance learning environment. You’re not looking face-to-face with an instructor and saying, ‘Oh, I didn’t do my homework.’”

Fran Wilson, director of education and training for Yokota Air Base, Japan, agreed.