Badly wounded, he plays dead as Reds kick him

Badly wounded, he plays dead as Reds kick him 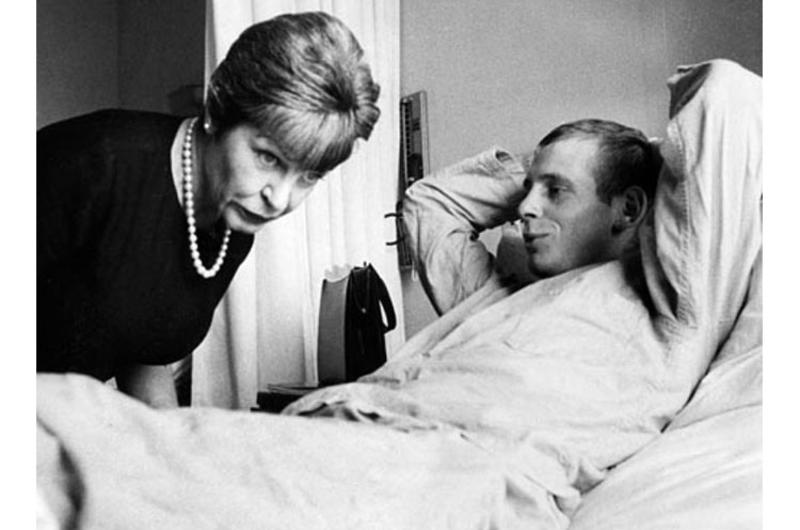 Comedian Martha Raye visits with Sgt. Richard Bartlett at the Clark Air Base hospital, where he was recovering for wounds suffered in the battle at Song Be, Vietnam.

By Stars and Stripes |

CLARK AB, Philippines — "The Viet Cong used my chest for a gun rest. Each time he fired he took hunks of meat out of my arm. ..."

Sgt. Richard Bartlett, Det. B, 1st Special Forces Group, was describing his experience in the grim battle of Song Be, Republic of Vietnam, as he lay recovering from wounds at U.S. Air Force Hospital, Clark AB, P.I.

Viet Cong guerrillas attacked Song Be, capital of mountainous Phuoc Long Province 75 miles northeast of Saigon, May 11. The guerrillas took and held the town for more than eight hours before being ousted in one of the bitterest Vietnam battles in months.

Bartlett, still deaf from the concussion of grenades, told his story by jotting it down on a pad.

"I was in a foxhole with a machine gun. The weapon malfunctioned and I was trying to fix it when my buddy, SSgt. Horace Young, yelled that the Viet Cong were throwing grenades.

"I heard one thud in the trench with us and Young was blown on top of me. I thought he was killed and kept trying to get the machine gun to fire.

"Another thud — I looked down to see a Viet Cong grenade sputtering at my feet. I tried to jump out of the hole but I didn't make it. My legs went numb.

"I crawled back to the next trench and loaded magazines for Sgt. Maj. Robert Frander and SSgt. Aldridge Martin.

"Then I decided to try to get back to my room and get my rifle and ammunition — once inside I started looking around. Then theme was an explosion. It knocked me down, cut my neck, and I was deaf.

"I yelled for a medic. But no one came. I staggered out of the room and fell in a hole where I thought I'd die. ... I was bleeding badly from neck and leg wounds.

"I was in the hole about two hours when Capt. Miller (he couldn't remember the captain's first name) carried me to the mess hall which was, being used as an aid station.

"I was in there about an hour. There was much small arms and mortar fire outside — I remember seeing Viet Cong all over the mess hall — they thought I was dead. They stepped on me and kicked me — I played dead — there was no way to defend myself.

"Pretty soon daylight came and part of a patrol came into the mess hall and got me out. While in the mess hall, I think the Viet Cong had control of the camp.

"When they were taking me to a air evac helicopter I remember a lot of sniper fire."

Bartlett said that as he was playing dead a Viet Cong used his body as a support to steady the aim of his carbine and that each time the Red. fired bullets grazed his arm.

Bartlett was literally sprayed with deadly fragments. He said he was grateful for the care he received in Vietnam and at the Clark hospital which has become the medical center of Southeast Asia.

Bartlett was especially grateful to Capt. Miller — "He saved my life," the soldier said.