Honor guard mascot turns out to be prodigy

Honor guard mascot turns out to be prodigy 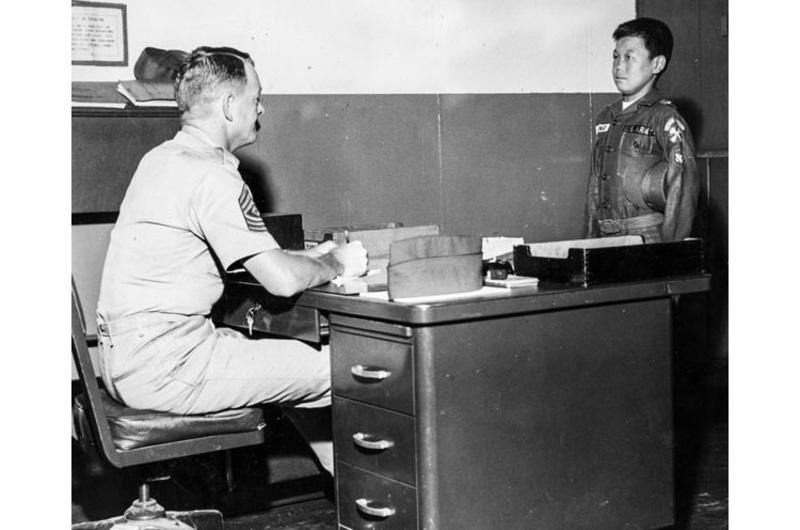 By ARNOLD ASRELSKY | Stars and Stripes

SEOUL — Men of the Eighth Army Honor Guard woke one morning last March and found a bright-eyed Chinese lad peering down at them from an upper bunk of their billet.

The youth wore the black uniform of a student — torn and bedraggled. He was bruised and marked.

SP4 Charles Sturges, one of five men still in the company present when the boy was found, recalls, "He looked like a hurt, shaggy puppy."

A/2C LEE CLARK, now back in the U.S., explained he had found the boy in the boiler room of the company where he apparently had crawled to escape the early spring chill.

Trying to communicate through gestures and pidgin English, the troops were startled to hear the lad finally say in perfect English, "My name is Lee.'"

A quick caucus among the men determined them to keep the 10-year-old tot around the outfit as a mascot. Since then, he has continued to astound his foster-parents by showing varied aptitudes and unlikely skills.

He is an expert boxer, holding- medals from the Korean school he attends. He holds the company's unofficial billiard championship, and has racked up wins over every man in the outfit on the squad room table.

LEE HAS LIVED 6 of his 10 years with American servicemen, accounting for his familiarity with U.S. language and customs.

His first memory is of fleeing north Korea with his family — headed south for freedom. The family was overtaken by a communist patrol and rapid rifle shots killed his mother, father and older brother.

LEE "PLAYED POSSUM" until the communist guards had left, then crawled on south until found by a ROK Army sergeant. He was hospitalized, then sent to a Pusan orphanage upon recovery.

Some U.S. sailors attended a Christmas party at the orphanage, took an Immediate liking to young Lee and spirited him from the home and onto their aircraft carrier.

He sailed to Yokohama, Hong Kong and Hawaii before returning to Korea, where his Navy days ended. A Navy chief turned Lee over to a soldier of the 226th Ordnance Bomb Disposal unit.

ROTATION TOOK ANOTHER foster father away, and Lee ended up with the 558th MP Bn., later redesignated to the 728th. Lee was "commissioned" a second lieutenant.

Lee goofed with his new outfit—brawling with a classmate (he won) and playing hookey from school. A "court-martial" was held and Lee was reduced to his present rank, specialist fourth class.

Pride smashed, Lee took his savings of 500 hwan ($1) and struck out on his own. He was set upon by thieves who worked him over and stole his money.

It was then he crawled into the Honor Guard's boiler room to lick his wounds — and found a new home.