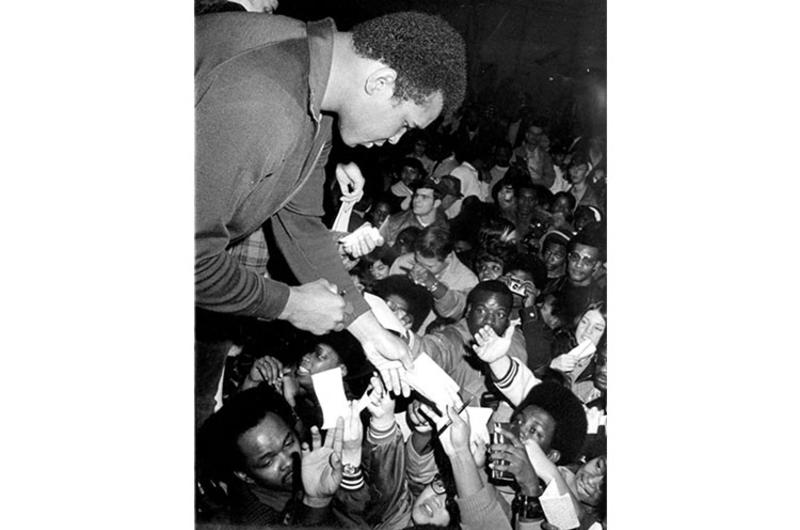 TOKYO (S&S) — Former heavyweight champion Muhammad Ali told a cheering crowd at Yokota Air Base Sunday that Joe Frazier, when the two meet in a rematch, will become "the first colored satellite."

A crowd of about 4,500 crowded Hangar 14 beside the base flightline to watch Ali revert from boxer to standup comic. A passerby might have thought that Bob Hope or Dick Gregory was holding forth. But it was Ali the Only, at his vibrant and poetic best.

For both Frazier and Mac Foster, whom Ali meets April 1 at the Budokan, Ali had dolorous predictions in verse. In one long, flamboyantly-delivered poem, Ali described himself tearing into Frazier and hitting the champion so hard that he will rise from the ring and disappear from view, with radar picking him up over the Atlantic. Ali concluded with:

"Who would have thought as they came to the fight,
'They would watch the launching of the first colored satellite."

Foster got a briefer pre-fight epitaph.

"I predict I'll knock him out in round five,
"Because he's talkin' jive."

"It's really hard for me to lose,
"With the stuff I'm going to use."

Ali came to the base, 30 miles west of Tokyo, under the auspices of BAMA (Brotherhood of Military Airmen) and the Black Awareness Association. Representatives of both sat on the platform with Ali as he delivered his egocentric monologue. Learning the name of one, Staff Sgt. Leonard E. Foster, Ali grasped his lapels and asked if he wanted to get it on.

"He said he'd rather be caught in Vietnam with a BB gun," Ali said as he sauntered back to the microphone. There were gales of laughter and applause. Competing with that and the roar of outgoing jets, Ali went on. As he finished the poem on Frazier, he went into his famous shuffle, aimed a graceful flurry of blows at a phantom opponent and counted him out, accidentally kicking Col. John W. Grow Jr., commander of the 475th Air Base Wing.

"I'm really sorry about that, Sarge," Ali said, making an elaborate show of dusting off the colonel's trousers. "I was educated down south. I know how to act." The last part of that was smothered by laughter.

Ali said he might not have come if he had known he was going to speak in a hangar. Grasping his neck, he said: "You should all be allergic to that word."

Ali had said earlier in the Okura Hotel that Frazier was "going out in six, and he will be in a terrible fix." He told the predominantly black crowd, with a good sprinkling of whites, that Frazier had been beaten up so badly in his winning title match with Ali that "his face was a national disgrace. He should have turned it in for salvage.

"Mac Foster and Joe Frazier are ugly," Ali said. "Joe Frazier is so ugly that when he cries, the tears turn around and go down the back of his head."

Asked if he thought Frazier might retire after the rematch, Ali replied: "He's retired now, all those chumps he's been fightin'." He refused to comment further on Foster, telling those who asked to "stop agitatin'.

"He's in enough trouble just signing that contract," All added.

Ali said that the day before, a high-speed precision camera had clocked his punch at four one-hundredths of a second. Talking of his second fight with Sonny Liston in Lewiston, Me., Ali said; "All those people who blinked at that moment, they missed it."

All was asked if he thought he could beat George Carter, an Air Force sergeant who holds the Japan middleweight championship and was on the platform with Ali.

"Is he Japanese?" Ali said, eyeing Carter suspiciously. "Oh, he's the spook champion." He motioned Carter over beside him. "You a boxer? What kind of boxes do you make? Cigar? Orange? Are there any brothers boxing here? No? That's why you're the Japanese champion. Okay, have a seat. I was just gonna get your picture in the paper."

Sparring with Carter in a public workout last week, Ali faked being knocked down and made a bizarre joke of it.

Extolling his speed and power, Ali said: "I'm so fast, I'll hit you before God gives you the message."

Why, then, did Frazier knock him down?

"I tripped over a left hook," Ali replied.

"He wants it and I want it and the promoters want all of it," Ali added. "You don't act funny with money. Frazier? He'd rather slide down the sharp edge of a razor into a bucket of turpentine."

What about his own retirement? Anytime soon? Ali said he will probably retire after beating Frazier. What then?

"They have sumo wrassling here," Ali said. "I might be a sumo wrassler." He went into the sumo wrestler's crouch, raised a foot and stomped it down (as the wrestlers do to clear the ring of evil spirits) and wiggled his backside. The crowd roared.

A small boy had asked the question. Ali asked how old he was and the boy piped, "Eight."

Ali was introduced as "Brother Muhammad Ali." As he stood, so did his trainer, diminutive Angelo Dundee.

"Sit down," Ali growled at him. "Didn't you hear him say brother?"

A teenager celebrating her seventeenth birthday asked for a "birthday kiss."

"What's the law around here?" Ali asked. The girl walked up to the platform and Ali held up a. newspaper as he allowed her to kiss him, then lowered it and was kissed in full view.

"It's good for my ego," he said, "that so many soul brothers will come out to watch me rumble." Cheers and applause.

There was only one solemn moment. An airman from Korea asked him, "Do you have any message for the brothers back there?"

"Tell them to do their best and keep the faith," Ali said earnestly.