The pin says it all

The pin says it all 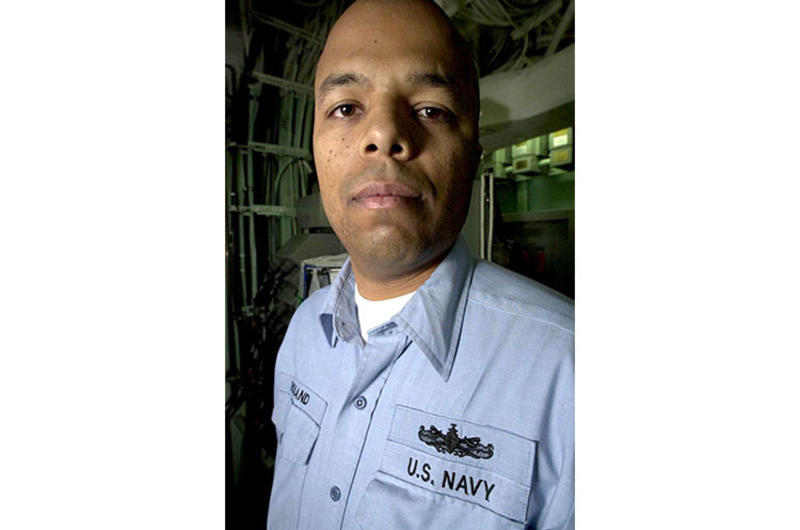 Petty Officer 2nd Class Mark Roland, one of the enlisted surface warfare specialist coordinators aboard the Curtis Wilbur, says the ‘murder board’ is the toughest part of earning an enlisted warfare pin.

The pin says it all.

You can roam around the bridge with ease. Know how the engine room works. Understand what it takes to get a ship or aircraft underway. How a ship’s weapons systems work.

Enlisted warfare pins are the hard-won and much-desired emblems sailors work for the moment they check aboard a ship, squadron or battalion.

They are also the currency of promotion boards, whose decision as to whom makes chief petty officer could rest on whether sailors have these pins.

The submarine community has had a warfare pin for almost 80 years. But the rest of the Navy — surface ships, air wings and Seabee battalions — have had their own designators for only a couple decades or less.

Senior sailors said the programs started in the late 1970s and early 1980s to instill pride in service and help sailors stand out among their peers.

Earning a pin is a big deal, said Master Chief Petty Officer Carol Varner, command master chief of the destroyer USS Curtis Wilbur, based at Yokosuka, Japan. Sailors are allowed to put the designation in their rank, much like a doctor attaches “M.D.” to the end of their name.

For example, Petty Officer 2nd Class Mark Roland, one of Curtis Wilbur’s ESWS coordinators and an electronics technician, known as an “ET” in the Navy, would write his name ET2(SW) Mark Roland on Navy correspondence. The SW represents his surface warfare qualification. Air warfare qualified sailors use AW, Seabees add SCW, and submariners put SS after their rank.

The ESWS pin, silver with crossed swords over a ship breaking the water, shows that a sailor has learned the ins and outs of a surface ship. The EAWS designator indicates a sailor’s expertise with particular types of aircraft and functions within a squadron. It has silver wings protruding from a shield with the words “Air Warfare” emblazoned on it. The SCW pin, with the Seabee community’s mascot, a machine-gun toting bumble bee, at its center, is least recognizable pin, but is highly sought after by sailors because of the unique difficulty attached with getting it: one has to be assigned with a Seabee battalion.

“All the things you need to be a well-rounded Seabee,” he said. “You actually know a little bit of all the stuff.”

The standards for each pin are put into books that each candidate must take to lectures and practical demonstrations and on watch. As they demonstrate knowledge, warfare-qualified sailors who are specialists in that particular area sign the books.

But getting those signatures isn’t all about enduring lectures. Qualifying sailors have to observe or take part in special evolutions, like sea and anchor detail, flight quarters or underway replenishments.

“It’s a great experience,” he said. “I’ve seen things I’ve never seen before because I was always down in the engine room.”

Varner, as the command master chief, is responsible for making sure her sailors get qualified.

“More so than it being a mandatory requirement, I think the Navy wants to try instilling warrior ethos,” she said.

From option to requirement

Since 1997, the pins have been a mandatory part of Navy shipboard training.

Navy policy states sailors who have to qualify must do so within 18 months of reporting aboard. Sailors assigned to ships or deployable units can’t be recommended for advancement beyond petty officer second class without qualifying.

Qualified sailors have to “requal” after reporting to a different class of ship, or reporting back to sea from shore duty within one year of reporting. Requirements for requalification vary. On Curtis Wilbur, Roland said, returning sailors only have to pass a 100-question written test.

“It’s really up to the command,” said Petty Officer 1st Class James Lively, the assistant leading petty officer for Det. 4 of Helicopter Anti-Submarine Squadron (Light) 51, based at Naval Air Facility Atsugi. He said he had to get signatures in his book again and pass a written test, but there was also no board.

According to Petty Officer 1st Class James Morales of NMCB 3, an oral board is required at his battalion for requalification.

Depending on whom you ask, sailors have their own thoughts on how tough it is to qualify for a pin is these days. Some argue that forcing sailors to earn one has created a watered-down system where people get the pins without putting in much effort. Others argue that it’s just as challenging now.

Lively qualified for his air warfare pin the first time in 1993 aboard the aircraft carrier USS Abraham Lincoln.

“Qualifying these days is easier, to be honest,” he said.

“When I did it, I had to go out and load bombs on F-18s. You had to have that hands-on experience with the aircraft to get the signatures.”

But while the requirements might have eased up, in his view, Lively said the program has also retooled itself to be more meaningful.

He said the focus for today’s warfare qualification programs is what he calls “platform-specific” requirements. This means sailors become specialists on certain types of aircraft, and when they transfer to another command, they have to requalify.

“The old way challenged you, but you only got a little about different airframes,” he said.

“It was brutal in the ’80s,” Varner recalled. She said her board had lasted more than three hours and was a nonstop assault of very detailed questions.

All that talk about it being a “warfare mill” in the Navy these days is bunk, Varner said.

“We don’t make it easy for them now,” she said. “They definitely earn it on this ship.”

After getting the signatures, sailors take a written test, replete with 150 questions. Get a passing score, and your next stop is the “murder board.”

“The murder board is really the true test for the pin,” said Roland. “They get their cuts and scrapes with us. If they can get past us, they’re definitely ready for the chiefs.”

A murder board can last as long as three hours, Roland said. All that time, about 15 senior warfare-qualified petty officers assail a warrior wannabe with detailed questions about the ship. No more than two sailors go through at a time. Roland said about 30 percent of sailors that take the murder board don’t make it on their first try.

“If you can’t pass the pre-boards, you’re not going to the command board,” he said.

A pre-SCW board, done at the company level, precedes the command board, said Rogers.

“We try to make it as hard as possible,” he said. “It’s tough because you sit there and have to take all these questions coming at you from all sides.

“If you can keep your head and do it, you’re almost home.”

Going before the board

The final board on Curtis Wilbur, conducted by “whatever chiefs are not on watch,” said Varner, is only about an hour long. But that’s because there’s a high expectation that sailors appearing before them will know their stuff.

“If they don’t make the cut, we chew the first classes out,” Varner said. Roland said so far, only one person didn’t pass the final board on the Curtis Wilbur.

Petty Officer 3rd Class Mayra Canas, 21, assigned to Det. 2 of HSL-51, said the anticipation of facing all those experts is a lot worse than the actual experience.

“I was real nervous,” she recalled. “I thought it would be hard, but I studied constantly, several hours every day while the ship was underway.”

The board keeps you until “they’re satisfied you know what you’re talking about,” Hill said.

Getting an early start

Although second class petty officers and above are required to qualify, there’s no shortage of junior personnel vying for the pins.

Fireman Nome Noringhang, 19, recently qualified. He said he sees plenty of advantages for doing so — he wants to go to the Navy’s information systems technician school. He figures having the pin while still a fireman will help a lot.

“When I get there, I’ll stand out,” he said. “People will know I’ve been to sea and know about my ship.”

Seaman Sparkole Dyeth, assigned with NMCB 3, is not in a Seabee rating. She is a storekeeper, and would normally earn her ESWS first. But being attached with Seabees gives her a unique opportunity to earn a SCW pin, and she said she’s going for it.

“Because it’s just different … you’ve heard of the surface and air pins, but you don’t hear much about SCW,” she said.

The biggest troubles she foresees are with general military tactics and contingency operations, areas that center on how to set up a perimeter, place weapons, and deal with nearby enemy encampments.

“You actually have to draw a diagram,” showing a solution to a problem the board proposes, she said.

Firemen Travis Murray, 20 and David Frazier, 19, are working on their qualifications together.

“We came to the ship together, and we’ve done everything else together, we figured we might as well,” attempt to qualify for the pin at the same time, Murray said.

Frazier said qualifying is, “A very long process. That’s especially true if you’re an E-3. You really got to want it.”

“It gives me pride to wear this,” Noringhang said of the pin stitched to his uniform. “People come up to you and they’ll ask you about a system. It’s great that I can look at it and know what it is.”