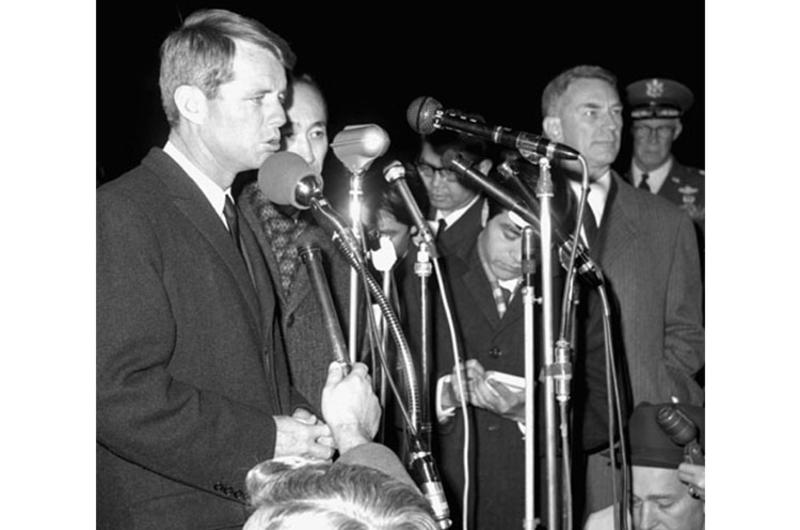 Robert Kennedy speaks to reporters and well-wishers at Yokota. At right is the U.S. Ambassador to Japan, Edwin O. Reischauer.

By Steve Stibbens | Stars and Stripes

Kennedy, on his first trouble-shooting mission for President Johnson, said on his arrival Thursday night that the dispute "must be decided and determined by Asians, not by outsiders."

He said he hoped "by expressing our concern that Malaysia, Indonesia and the Philippines are able to take the steps necessary to resolve their differences in a peaceful fashion, which would be a major step forward in our judgment."

The expression of U.S. concern is believed to include a strong warning to Sukarno against continuing his openly announced economic war to "crush" Malaysia.

Ikeda, who is attempting to mediate the Indonesia-Malaysia crisis, was briefed by Sukarno on his recent talks with Philippine and Cambodian leaders. Observers here believe that Ikeda may have tried to turn Sukarno's ambitions toward making Indonesia a prosperous nation rather than stirring up trouble with neighbors.

Kennedy, who met Friday morning with Japanese Foreign Minister Masayoshi Ohira, was to talk with Sukarno before seeing Ikeda.

U.S. Embassy officials said the attorney general's schedule is being kept flexible and will probably depend on the outcome of his talk with Sukarno. They said he will leave sometime this weekend for Manila, Kuala Lumpur, and London.

Kennedy was to have an audience with Japanese Emperor Hirohito Friday afternoon before meeting with Sukarno.

Kennedy met with the 63-year-old Indonesian president in Jakarta in 1962. Sukarno, despite frequent blasts at American "imperialism," is said to respect Kennedy for his outspoken honesty and ability.

The Indonesia-Malaysia crisis stems from Sukarno's militant opposition to the formation of the Malaysian Federation which cane into being in September. Sukarno has charged that Britain, as sponsor of the former British colonies which make up Malaysia, is guilty of "colonialism in a new way" and has vowed to "crush" the federation economically.

Both Russia and the United States axe deeply committed to a foreign aid program in Indonesia. The U.S. supplies some $70 million of aid a year. Russia is estimated to have supplied plied another $367.5 million in a 4-year period ending in 1962.

Britain, pledged to guarantee Malaysia's security, has troops deployed in North Borneo to halt a Sukarno-backed guerrilla campaign there.

Kennedy is expected to offer a choice to Sukarno — either he stops making trouble for the new federation or the U.S. will stop its aid to Indonesia.

Kennedy, accompanied by his wife, Ethel, arrived at Yokota AB, on the outskirts of Tokyo, aboard a. Military Air Transport C-135 jet Thursday night. They were met by U.S. Ambassador to Japan Edwin O. Reischauer and U.S. Ambassador to Indonesia Howard P. Jones.

The 38-year-old brother of the' late President paused at planeside to tell some 200 well-wishers and reporters that his visit here is also one of friendship between the U.S. and Japan.

Then, with a faltering voice and swelling eyes, he thanked the people of Japan, "on behalf of my sister-in-law Jackie Kennedy, my mother and father, and all the rest of my family for the many indications of affection and concern that was shown to us on the death of my brother."

He said President Kennedy talked frequently with him about visiting Japan and had hoped to make a. trip here sometime this month or early February

From the plane, he was driven a. half-mile to a. memorial to John F. Kennedy, built by the Japanese employees at Yokota AB. Kennedy and his wife placed a wreath at the foot of the monument.

Kennedy was introduced to Ryosuke Sawada who headed the fund-raising campaign to build the memorial. Kennedy turned to walk away then stopped and handed Sawada his gold tie clasp — a replica of a PT boat inscribed "Kennedy."

Than the attorney general and his wife walked through a crowd of spectators, shaking hands and chatting with a group of teen-agers.