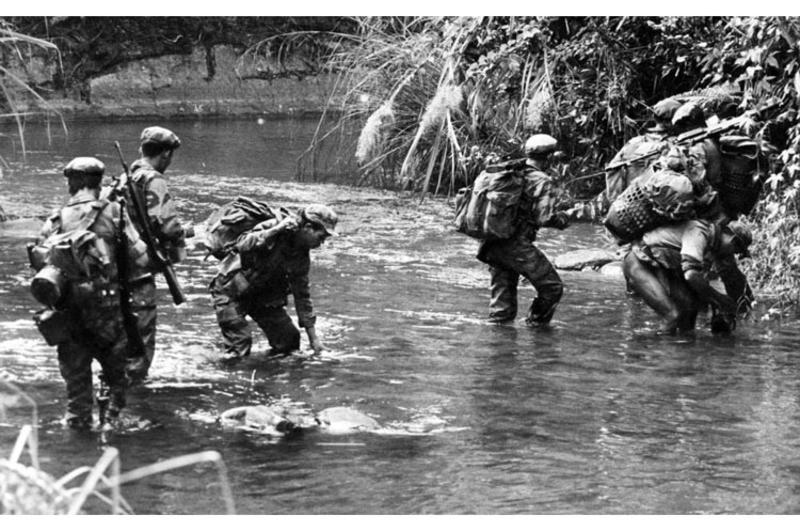 Koho tribesmen pause en route to their objective to fill canteens in a cool mountain stream. On the trails and along the water's edge were numerous blood-sucking leeches. (STEVE STIBBENS/STARS AND STRIPES)

By STEVE STIBBENS | Stars and Stripes

DAM PAO, Republic of Vietnam — The shooting began and the call went back up the line of Montagnard soldiers

Instead of moving forward to fire on the fleeing Viet Cong, the excited bazookaman rammed a shell in the tube, aimed at the ridge in front, and squeezed.

Misfire! He had shoved the shell in too far, past the electric contact points.

Standing on that next ridge, watching as Koho rangers fired at the guerrillas, was S/Sgt. Howard Stevens, Special Forces adviser to the Montagnard strike force. The bazookaman's excited haste probably saved his life.

Stevens, 32, is part of a 12-man "A-team" making soldiers of primitive Koho tribesmen in the jungle mountains west of Dalat.

"To say the least," says Stevens, "it's a rewarding experience to take a man out of his loin cloth, and train him to use modern weapons when the nearest thing to a machine he'd ever seen was an ax."

Stevens says the job, such as with the excited bazookaman, often draws on a man's patience, too. There was the time, during a battle, that his men broke contact with the Viet Cong and began chasing a deer.

Another time, they broke off and began grabbing up fish blown to the top of a stream by grenade concussions. Once they decided to climb trees and pick oranges after an ambush, when they should have been moving out.

"Not too long ago, one of our submachine gunners threw an epileptic fit," Stevens said. "That fellow had been with us for three months and we'd had no idea he was epileptic."

Stevens, like his teammates, is assigned to Vietnam from the 1st Special Forces Group based on Okinawa. The team is headed by Capt. George Nfyler.

Each member is a specialist in his own field and has at least a working knowledge of each other's job.

Being expert in military weapons and guerrilla warfare is only part of the job. American Special Forces teams here are normally placed under the jurisdiction of the local Vietnamese district chief. They are, however, usually given a free hand to move into and develop the remote Montagnard jungle communities.

The job calls for the team to select the site for a new camp, enlist help from primitive tribesmen to clear the land, construct houses, buildings and eventually an airstrip.

Most teams must work through two interpreters — first translating from English to Vietnamese, then into the local tribal language, in this case Koho.

"Just imagine us trying to build the Biblical 'Tower of Babel', and that's about what we run into," says Stevens.

Stevens is a graduate of the Army Ranger School, and a former pathfinder, with over 700 parachute jumps. He's also used to trying experiences.

He went to Korea July 2, 1950. He saw the fighting around Taejon and was captured 17 days later. But not before he won the Silver Star, Bronze Star and two Purple Hearts.

Stevens spent the next 37 months seeing the other side of Korea, from prison camp to prison camp. During his "tours", he says he came to know each of the 21 Americans who later became turncoats.

Stevens' next tour will be at Fort Benning, Ga., where he will, attend officer candidate school.