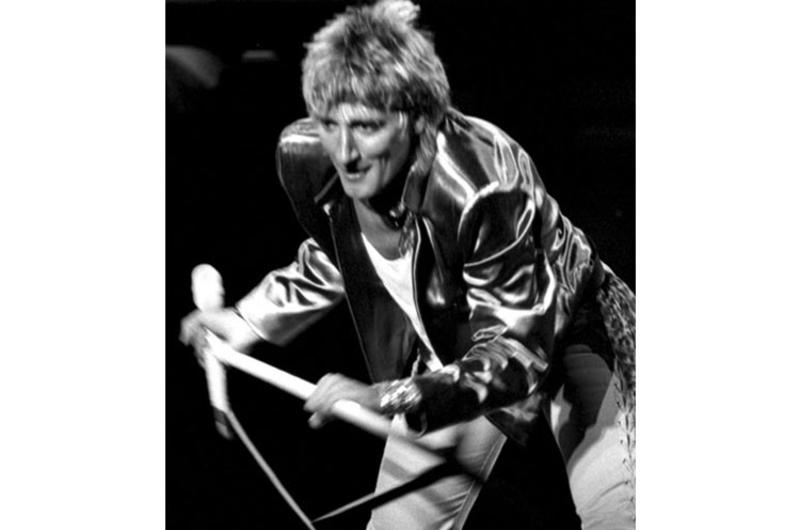 TOKYO — It is late as usual for Rod Stewart, a rock star notorious for never making curtain time.

Paper airplanes, made of the one-sheet programs, soar from the balcony into the laps of the ringside aristocrats, the spectators who paid the most to get nearest to Stewart. The young still flood in — Stewart's crowd, all his, always loyal and never late. They are in fashionable spring dress, Levis, muslin frocks, an antique miniskirt here and there.

Let the punk rock rowdies call him a hard rock reactionary. Let his critics say he's slipping from the summit. That is all lost on these fans at the Budokan (Hall of Martial Arts).

Suddenly a tempting beat sounds through the dense stage curtain. The curtain lifts like a stormfront and rock thunder pours forth.

THERE HE IS, the hayshock haircut, the hoarsely rich voice. This night, Rod Stewart, who once thought of a soccer career, is a wiry, elfin figure in leprechaun green.

Do it, Rod. Bring the fans to their feet. Answer them back, the punk rock Sex Pistols and their cheap shots.

You spoke much softer than your music, a few hours before, in a hotel auditorium crowded with friendly strangers.

"I don't think (the criticism by the punks) was aimed at me particularly," Stewart said, with the easy shrug of the successful. "I think it was aimed at people like me who are successful, like Elton John .... We all came through to be successful for so long, And they can't knock us off the top, that's what it is. As far as punk rock goes, I like any form of rock and roll."

GAMELY SPOKEN, Rod. Now, on with the music.

With a sly wink, you answered a question about that one.

"Maggie May was a woman who took advantage of my body when I was 16. Her name was not Maggie May. I forget, I think her name was Pat Something. ..."

A few years before, when Rod Stewart first sent his music full gallop through Tokyo, he advised young fans to ignore his offstage lifestyle — a gusto approach that would have made Straight Arrow weep.

"I THINK I'M living two lifestyles now, I must admit. I mean, last night we were dancing in the street at one o' clock in the morning with silly hats on. And yet, on the other hand, I miss my wife and children, I really do. Everyone thinks my wild side has slowed down, they really do."

Ah, Rod. Where is the recklessness of a few years ago? Like that time in '75, when you and the group raised a rowdy protest after being ejected from a Holiday Inn bar in Lakeland, Fla. An angry sheriff scolded, "I understand you have a history of such things," and damages were paid before you moved on.

But more than years can change a man, and Stewart admitted that the violent passing of a friend, John Lennon, shook him terribly.

THERE WAS that threatening letter six months ago, Stewart said, and the whacko who threatened to shoot him with a rifle in Madison Square Garden. He now moves in the shadow of a bodyguard, and professionals watch his children.

Still, he advised young performers that there's room in the center ring.

"Really, they've just got to keep at it if they totally believe this is what they want to do, be in music. I was a starving musician once. It was the only thing I knew how to do. It was either that or play football."

Football is what they call soccer in Scotland, where you break into the Rangers or Celtics or wind up a burned-out nobody. It was an easy choice for Rod Stewart.

STEWART CAME to a press conference with all of his musicians, a jaunty bunch. Once all in fun they ducked under a long table to get away from aggressive Japanese photographers. Stewart's sharp features peered out from beneath a tablecloth — the only trace of the antic behavior of former years. At one point, though, Stewart's group turned the tables on the cameramen — snapping pictures of the ones who were snapping pictures of them. Stewart joined them.

Later, in the Budokan, the only things that pop at Stewart are strands of confetti that fly around him as he zips across the stage in a track-star sprint during his act.

Not this house. Not tonight.

HE'S OUT of motion for a moment, and out of sight, drummer Carmine Appice covering his retreat. The drummer deftly keeps the audience pinned down until Stewart returns, after a shift from one garish costume to another.

The Muddy Waters song with the treadmill beat and the see-Spot-run lyrics comes off like a primitive symphony.

Rod Stewart has them all up now.

Somehow, as the lyrics pour forth, it sounds as if there is more meaning in them than Rod could have put in them in the past.