An unforgettable Christmas Eve midnight Mass during the Korean War

An unforgettable Christmas Eve midnight Mass during the Korean War 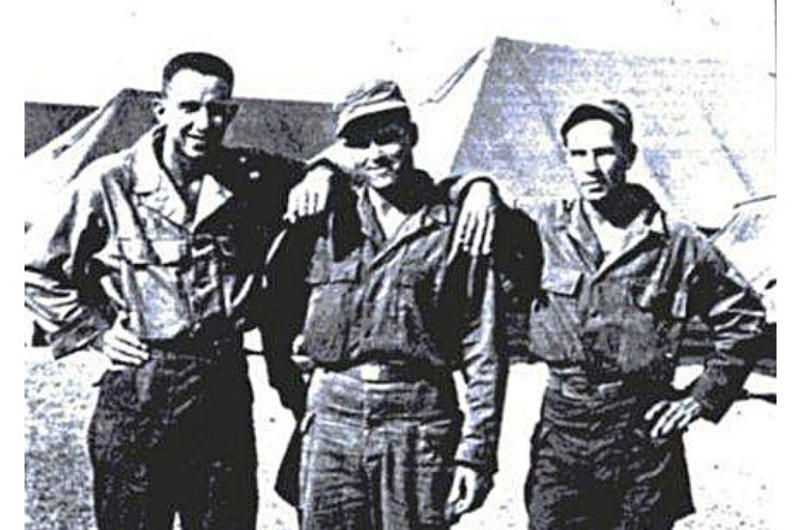 At Taegu, South Korea, Norman Deptula, left, stands with two soldiers from the 581st Signal Radio Relay Company after they had been evacuated out of North Korea.

By CARLOS BONGIOANNI | Stars and Stripes

Amid the horrors and devastation of war, a midnight Mass 65 years ago in a dilapidated church in Kyong-ju, South Korea, would prove to be a miracle of sorts for Army Pfc. Norman Deptula.

It was December 1950, six months into the Korean War. Deptula, then 21, was among the approximately 100,000 United Nations troops who had just been evacuated out of North Korea. He had been among the "Chosin Few" who had escaped intense battles against overwhelming Chinese forces in the Chosin Reservoir campaign.

In a telephone interview Wednesday from his home in Webster, Mass., Deptula, now 86, recalled how frightened he was after an estimated 300,000 Chinese crossed over the Yalu River into North Korea, intent on annihilating the U.N. forces.

“We were outnumbered. The odds were stacked against us,” Deptula said, adding that he didn’t expect to make it out alive.

When the Chinese invasion started that October, Deptula was in Koto-ri, a small village in the Chosin Reservoir area, assigned to the Army Signal Corps’ 581st Signal Radio Relay Company. “I wasn’t in the infantry, but I saw a hell of a lot of tragedies,” he said.

It was a brutally cold winter, making the war that much worse for the combatants, many of whom suffered frostbite and lost limbs.

Images of the war dead, their limbs frozen solid and stacked in trucks and jeep-drawn trailers, still haunt Deptula today. Many were buried in trenches quickly dug by bulldozers as the U.N. forces made a hasty retreat.

To get to the evacuation point at Hungnam, Deptula said, the U.N. forces had to “fight like hell,” to break through the encircling Chinese forces. It took 26 hours just to go 40 miles, he recalled.

Evacuated to Pusan, South Korea, and then moved up to Kyong-ju, a shell-shocked and dejected Deptula was homesick. It was the first and only Christmas he spent away from home and loved ones, he said. Earlier in the year, he had been stationed in Japan, looking forward to going home in August as his 21-month enlistment came to an end. Then war broke out, his time in service was extended a year, and he was shipped out to Inchon, South Korea, in September.

“Being home for Christmas was a forlorn hope,” Deptula said. “We needed a boost. We had seen so much war. It even seemed to us as if the war was almost lost.”

Then, on Christmas Eve, word was spread that there would be a midnight Mass in town. It was an answer to prayers. The GIs who attended the service were unkempt, their uniforms ragged and in sharp contrast to the nuns who wore starched white wimples.

For Deptula, a devout Catholic, it was a most unusual experience. Back home, for midnight Masses, he attended a large church with all its ornate and grandiose trappings. But in Kyong-ju, the church was pockmarked with the ravages of war. Inside, plaster had fallen from many patches of the ceiling. The local parishioners were mostly poor. “They had nothing, but they were still holding on to their faith.” And though the church “was not in great shape,” it struck Deptula as “a whole lot more beautiful than anything I had seen.”

Celebrating the birth of the Prince of Peace that night allowed Deptula and other GIs with him to forget, at least for an evening, the death and destruction of war that had already left an indelible mark on their souls.

After his discharge from the Army, Deptula attended Boston University, received a degree and taught Biology for 34 years at Bartlett High School in Webster, Mass., retiring in 1990.

About 10 to 15 years ago – Deptula doesn’t remember the exact year – he wrote down his remembrances of that Christmas long ago and titled it “A Christmas Story.” Over the years, when requested, he has read it at Christmas parties or at various gatherings with fellow veterans

Though he has celebrated every Christmas since at home with his beloved Catholic community, Deptula says every winter as the Christmas season approaches, he is transported back to that small church in South Korea, where he celebrated his “most unforgettable and most memorable Christmas.”