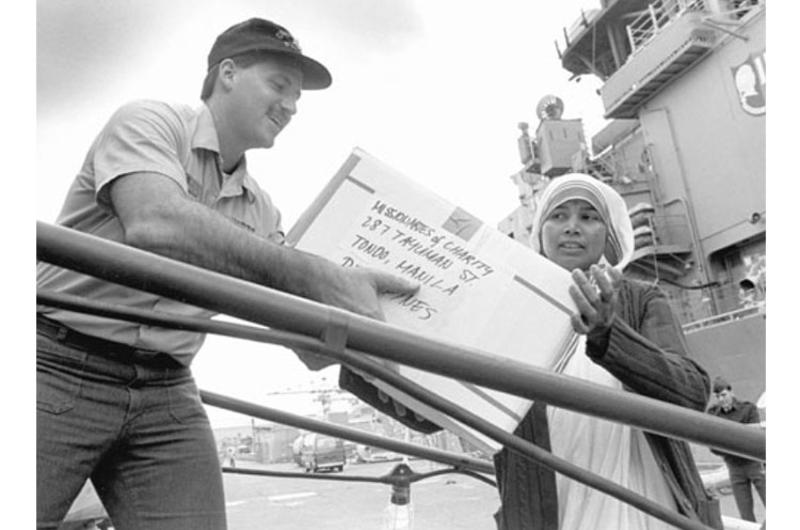 Yokosuka Naval Base, Japan, November, 1988: Petty Officer 2nd Class Robert Fabrizio passes typhoon relief supplies up to the USS Fife as Sister Lily Bumdum moves the next package along the line. The nuns, from Mother Teresa's Missionary Sisters of Charity, had collected 85 boxes of clothing, medical supplies and wheelchairs for victims of Typhoon Ruby in the Philippines. They had been using freighters to ship supplies, but switching to the U.S. Navy's 8,000-ton guided-missile destroyer enabled them to bypass the Philippine bureaucracy.

By Jim Mohr | Stars and Stripes

TOKYO — Mother Teresa's Missionary Sisters of Charity have much in common with the guided-missile destroyer USS Fife and other Navy ships.

The 8,000-ton warship left Yokosuka Naval Base, Japan, Saturday loaded up with 85 boxes of clothing, medical supplies and five wheelchairs donated by the Tokyo nuns to help needy and homeless people suffering from the aftermath of Typhoon Ruby that recently struck the Philippines.

USING WARSHIPS TO transport their goods is not new for the nuns, said Sister Mary Leon, coordinator of the project for the mission. The sisters have been working with the Navy since 1986 using various ships to transfer tuberculosis vaccines, second-hand clothes and other supplies to their mission in Manila where it is doled out to the "poorest of the poor."

Chaplain for Destroyer Squadron-15 and spokesman for the project, Lt. Carroll Wheatley, said, warships in the squadron have been more than helpful in assisting the sisters' efforts to get their supplies to the Philippines.

"This is part of a program that we call `Neighbors Helping Neighbors,' " he said.

"Ships from this area deliver needy supplies to the Philippines, Korea, and some of the smaller islands that also may need help. They also pick up and medically assist boat people off the coast of Vietnam, Laos and other areas in the region."

THE PROGRAM IS a blessing to the Catholic mission in Tokyo, which was using Japanese freighters in Yokohama to ship the supplies to the Philippines, Sister Leon said.

"The freighters would ship our relief goods for free," the nun said. But when the cargo arrived in the Philippines, bureaucratic delays could often delay the offloading of the charity supplies to the local mission, she said.

It was at this time, Sister Leon said, that the mission decided to look for a more efficient way of bringing their supplies into the country, and that was when they decided to contact the naval base at Yokosuka.

"By the grace of God" the Navy agreed to transfer our supplies, she said, adding, that ever since then, the supplies have arrived at the Manila mission without delay.

When asked if it felt strange using warships as a delivery service for the mission's charity goods, the former sister of Calcutta said, "not in the least. In fact, it shows us how good God really is; to show us that we can all work together to help those that are suffering."