When it comes to balancing bottles, he's the best

When it comes to balancing bottles, he's the best 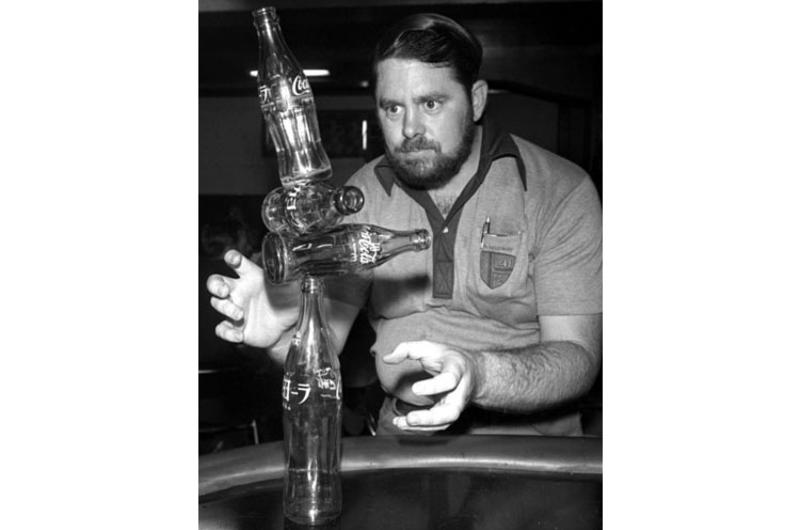 Bob Adams, an aviation electrician with Attack Squadron 115 on the USS Midway, demonstrates his talent for balancing bunches of bottles.

By JIM LEA | Stars and Stripes

YOKOHAMA, Japan (S&S) — Bob Adams was looking for something different ... something that really was his "own thing."

"Th' hippies," he explains in his Nacogdoches, Tex., drawl, "keep sayin' they wanna be free to do their own thing. But what they do isn't different. A lot of other hippies are doin' th' same thing."

Then he was just "sittin' around th' house with nothin' to do an' I saw a bunch of of Coke bottles. I started playin' around with 'em an', pretty soon, I was stackin' 'em.

And he's been stacking Coke bottles ever since for just about anybody who wants to watch.

"Coke bottles are about th' best ones to stack," he says. "I can stack from two to 20 in 32 different designs."

The most difficult, he says, is a four-bottle design which when finished, looks like a scale.

"There's one bottle for a base, one lyin' across the top horizontally and two more balanced on that one .. . one base to base, one mouth to mouth."

All that's necessary to practice his art, he says, is a "level surface" ... and an unerring sense of balance.

When he's not stacking bottles, Bob is an aviation electrician with Attack Sq. 115 aboard the carrier Midway, and, he says he's stacked bottles aboard the ship underway at sea, something "a lot of people though was pretty hard to do."

And, he gets pretty fancy sometimes.

The trash cans usually are the five-gallon variety, but he can "put a 25-gallon trash can on top of the stack.

"That's a little difficult because my arms get tired from holding it when I'm trying to balance it."