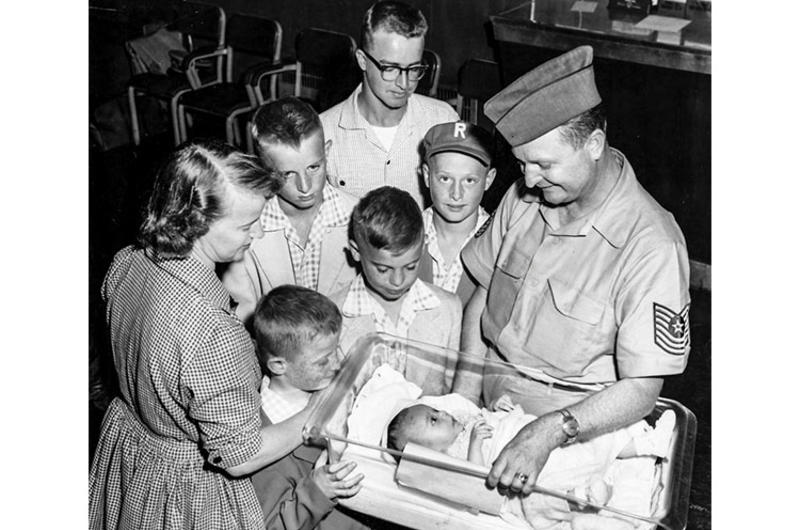 By Vera Hirschberg | Stars and Stripes

The infant got her first look at her new family at Tachikawa AB, after she was gently carried off the Military Air Transport Service plane that brought her and her adoptive father, Master Sgt. Henry H. Young Jr., from Seoul.

Young admitted that he had run out of disposable diapers to his wife, Dorothy, on their arrival.

"That's all right," she smiled. "We've got plenty waiting for her at home."

Mrs. Young, from Hudson, Mass., and her husband, who is from Lancaster, S.C., had been thinking about adopting a girl for over a year. Young went to Korea in March to look for a child who would be eligible for adoption.

He looked no further than the Star of the Sea Orphanage in Inchon, which is sponsored by the Catholic Welfare Service, a branch of the National Catholic Welfare Conference. There, he found Susan Marie, then three-months-old, and "fell in love with her" immediately. Adoption papers were completed April 28. She wag baptized Marie Agatha, but the family decided to add the name "Susan." He paid no fee to the orphanage to adopt the child.

Young went to Korea last Friday to bring Susan home, but the infant had developed a skin rash and had to have a medical clearance before she could be brought to Japan. She was pronounced fit Monday, however, and her father jubilantly called Mrs. Young that night.

Young fed the baby "three or four times" on the plane from a plastic bottle and changed her diapers until they ran out.

Young is attached to the Office of the U.S. Air Force auditor general at Pershing Heights, Tokyo. He and his family, who live in Grant Heights, will leave Japan in August, for Charlotte, N.C., where he will do Air Force recruiting.