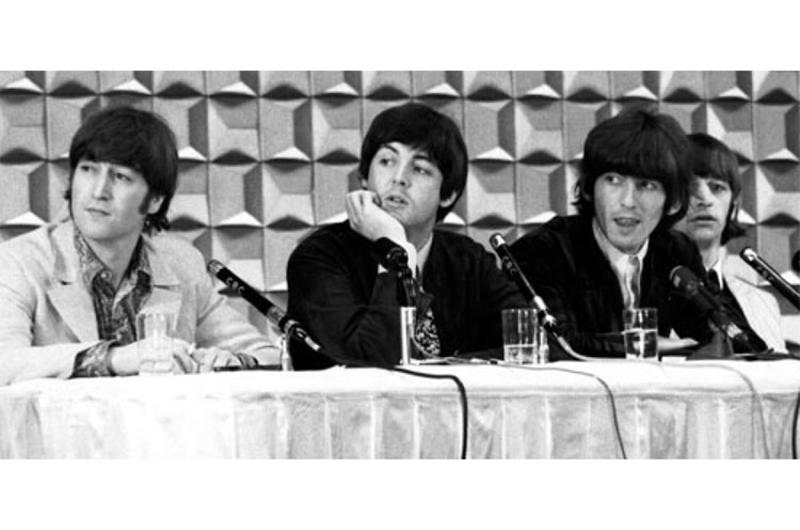 TOKYO — If you're not hip to the fact that Wednesday was "B-Day in Tokyo," then you're either a disgruntled barber or stoutly refuse to admit that there will always be an England — providing the Beatles don't go bankrupt.

The four hairy howlers arrived on the skirttails of typhoon Kit and there hasn't been such a gathering of Tokyo's finest since last year's policemen's picnic.

With Operation Beatles in full swing, there are cops on duty 24 hours a day to keep enthusiastic Beatles fans at a distance. One policeman armed with high-power binoculars does nothing but keep his eye on the Hilton emergency exits.

Three Japanese fans doing the Matterhorn bit have already been apprehended tying to make it to the Beatles' 10th floor suite.

American teen-agers scrambled for Beatles-viewing space on the roof of the military operated Sanno Hotel, and petite Japanese clerks in neighboring stores spend their lunch time peering at the Hilton through dainty, mother-of-pearl binoculars.

And when it comes to security, that 10th floor at the Hilton makes Alcatraz look like a playpen. There's only one elevator that will take you up to Beatles-ville and once you're there the corridor's look like a policemen's parade gone astray.

Special identification is required to approach the elevator, and if you make it to the 10th floor corridor, you'll find they keep in contact via constantly crackling walkie-talkies.

Since the Beatles' contract forbids private interviews. their one and only contact with the local press took place Wednesday in the Hilton's plush Pearl Ballroom. If it wasn't a humdinger of a. press conference it at least was a good, old-fashioned cliffhanger in a couple of spots.

As the curtain went up (the trumpets were sorely missed), there they were — John Lennon, Paul McCartney, George Harrison and Ringo Starr — clad in the latest mod suits as they stomped the floor and did a little whistling.

They proved to be affable, witty at times and a trifle subdued at other tines as they fielded questions from Japanese and foreign correspondents.

McCartney and Lennon did most of the talking while Harrison sat by attentively and Starr came in now and then with a well-timed quip.

It turned out. that they are against the war in Vietnam ("We think about it daily and don't like it ... But. we can't do anything about it"), like "colored American musicians" and in due time may "go bald" if they decide to change their hair-styles.

When asked for a reaction to an old British gentleman's indignation because tine Rolls-Royce design has been changed and the Beatles have been awarded the M.B.E. medal by the queen of England, McCartney quickly retorted. "We don't: like old Englishmen, either."

Where their own music is concerned, the Beatles make no rash statements.

"We are not great musicians," said McCartney. "We are adequate musicians." So why should do many people buy their records and flock to their concerts if they are only "adequate?"

"I suppose." tongue-in-checked Paul, "it is because they like adequate music.''

The Liverpool ]ads, obviously tired front their long flight from Germany, lost their cool only once — and then slightly and deftly — during the hour-long press conference. This happened when a foreign correspondent asked, "What are you going to do when you grow up?"

After asking if the correspondent was joking and getting the reply, "More or less," the gentleman was quickly told that. "You appear adult enough not to have to ask a question like that."