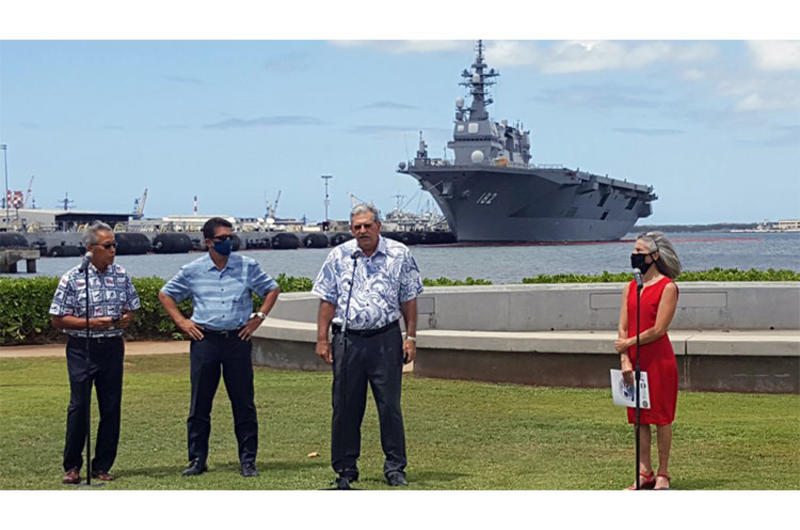 That elite group will be among 52 World War II veterans who will be the guests of honor aboard the Battleship Missouri Memorial in Pearl Harbor on Sept. 2. All are nearing or well past age 100.

It was on the USS Missouri, while moored in Tokyo Bay, that Japan officially surrendered, ending the world war that for America began with the Dec. 7, 1941, surprise attack on Hawaii.

“Fourteen of the veterans coming were either actually on the Battleship Missouri on Sept. 2, 1945, or in one of the aircraft or ships surrounding the Missouri at the time of the signing of the instrument of surrender,” said Elissa Lines, executive director of the Pearl Harbor Aviation Museum, during a news conference Wednesday at the Pearl Harbor Visitor Center.

“It is particularly poignant that they are coming for this commemoration,” she said.

Planners said many of the events originally considered for the event, to be held Aug. 29-Sept. 2, had to be dropped due to the coronavirus pandemic.

As it stands, the celebration will focus on a series of flyovers on Oahu of 14 World War II-era warplanes and a two-hour ceremony Sept. 2 to be livestreamed from the fantail of the Missouri.

The aerial parades are scheduled for the afternoons of Aug. 29 and 30 and immediately after the Sept. 2 ceremony. Routes will be announced later.

The 14 warbirds are now en route to Hawaii aboard the USS Essex, an amphibious assault ship.

Among the planes coming are a P-51 fighter-bomber; an F4F Wildcat carrier-based fighter; and two PBY Catalina “flying boats,” which were routinely used during the war for search-and-rescue and anti-submarine reconnaissance.

Thirty-three PBYs were destroyed during the 1941 surprise attack on Hawaii, Lines said.

A B-25 bomber, which was the aircraft used during the Doolittle Raid on Tokyo in April 1942, will also join the flyovers – although it almost didn’t reach the Essex in time for the sea journey, Lines said.

“That was the last aircraft to be loaded,” she said. “It traveled all the way from Florida to San Diego to be loaded on the ship. It had difficulties in flight and almost didn’t make it. It was seven days behind in its arrival in San Diego.”

“Sometimes it’s hard to believe that an aircraft can bring that kind of passion and emotion to the forefront,” she said. “Seeing the aircraft again unleashes memories that in many cases these veterans have never shared with anyone — stories of service, of battles, of camaraderie.”

Members of the 75th World War II Commemoration Committee have wrestled the past four months with how to proceed with the commemoration — or even whether to postpone it, said Tony Vericella, the committee’s executive director. Events that had been planned for Washington, D.C., for this past May marking the end of the war in Europe were postponed until late September due to the pandemic.

Vericella said a sense of urgency led the committee to push ahead with the Sept. 2 ceremony, albeit with safeguards in place to lower the risk of the veterans and their chaperones from being exposed to the coronavirus.

“During the last several months of communicating with the veterans around Hawaii and the mainland, several of them have already passed,” Vericella said.

“This truly is the last hurrah,” he said. “They’re making the choice. They want to be here, and we want to do it for them. Whatever hoops we jump through, precautions we take, this date of Sept. 2, 2020, is only going to be once.”