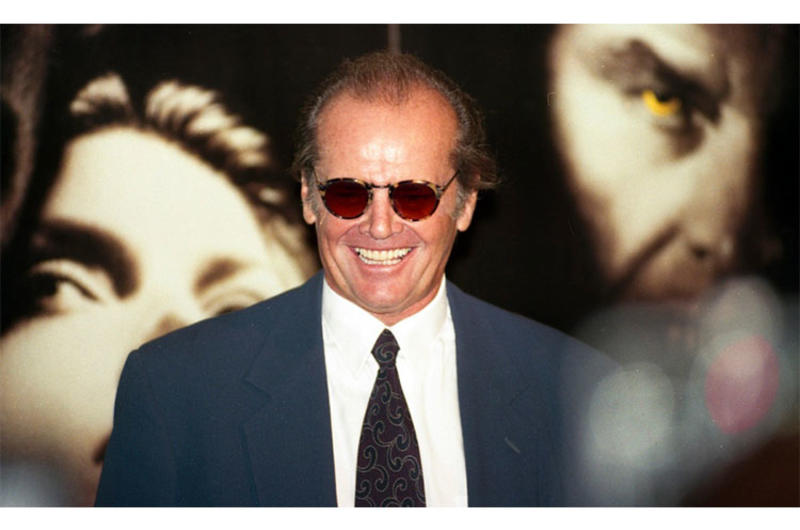 Actor Jack Nicholson, sporting his trademark shades and leer, poses in front of a poster of himself and "Wolf" co-star Michelle Pfeiffer during a press conference at Tokyo's Imperial Hotel in 1994.

Undoubtedly, Jack Nicholson has always been considered to be a unusual actor. He carries a personal "attitude" that emerges in every character he plays. You might say that he literally throws himself into the part.

Since he first received international recognition for his performance in "Easy Rider," he has been nominated for an Academy Award 10 times, winning twice for his performances in "One Flew Over the Cuckoo's Nest" and "Terms of Endearment."

In Nicholson's most recent movie, "Wolf," he plays Will Randall, a Manhattan book editor who is bitten by a wolf on a dark country road, and, of course, gradually becomes a wolf himself.

"Wolf" has already been a box office success in the United States and is currently being released worldwide. Nicholson personally ushered "Wolf" to Japan by holding a press conference at Tokyo's Imperial Hotel Sept. 19.

Sony Pictures, which is releasing the film throughout Japan, went to a lot of detail to make the press conference as creepy as possible. They made the conference a show in itself by playing strange music (presumably the soundtrack to the picture), lowering the lights and shining a black light on a huge full moon poster on the wall.

Much of the special effects show disappeared when Nicholson arrived. He is a show in himself; there was no need for fancy lights and music. It almost seemed as if he had a strange aura about him. He looked exactly the way that he does on screen, well-tanned and younger in appearance than his actual age of 57. He strolled in wearing a nicely styled suit and the trademark sunglasses, which he never removed.

His demeanor was surprisingly funny. He cracked jokes every chance he got. It's hard to tell what was more funny, though, the jokes or the way he told them. His natural voice is the same as the voice of the characters he plays. It almost sounds as if he is doing an imitation of himself.

"Wolf" was not filmed the way many horror movies are today. The focus of the movie is more on the character's adaptation to becoming a werewolf. The werewolf transformations were done more like those of the 1940's werewolf movies.

"''Wolf' is a project that involved Jim Harrison's (the author) novelist calling," Nicholson said. "He's a very old friend of mine, and we talked about a film idea of mine based on a technical approach called 'Wolfman, no makeup.' What that really meant was that we would do the transformations on screen, sort of the way John Barrymore did Jekyll and Hyde.

"I wanted to do these old-time tricks — you know, fall down behind the couch, come up with a beard, all that stuff. I'd always had that idea in my mind, and then Jim Harrison had a personal experience involving lycanthropy (a mental disorder in which someone imagines himself to be a wolf). We got to talking about it, and he sent me the treatment for 'Wolf.' "

Despite the fact that Nicholson is obviously the star of the film, he spent most of the press conference heaping praise on Harrison and director Mike Nichols. "I think that Mike's work in this movie is the most adventurous," he commented. "He's never done a movie about the metaphysical before. What he usually does is closely observe urban social behavior. I was interested to see what he would do with the film."

Nicholson studied for his role in "Wolf" by reading a lot of books about wolves and watching films of their behavior. "I did not go out and live with wolves," he said.

The rest of the conference seemed all too brief. Nicholson made remarks on various subjects, including his family life (which he didn't really want to get into) and the Haiti invasion. He commented that he was feeling a little "giddy" from all the excitement. It seemed that every time he got a little nervous, he. would respond with a joke.

After the question and answer period of the press conference, which only lasted about 30 minutes, Nicholson took time to pose for photos in front of the giant movie posters of him and co-star Michelle Pfeiffer. At one point, he even growled like a wolf and stuck his face in a photographer's camera lens. Maybe he was feeling giddy. Before he left, he commented that he enjoyed returning to Japan (after an 11-year gap between visits) and that he was looking forward to returning again.

"Wolf' opened Sept. 23 at Nichegeki Plaza in the Ginza district of Tokyo and is currently playing at other theaters throughout Japan.