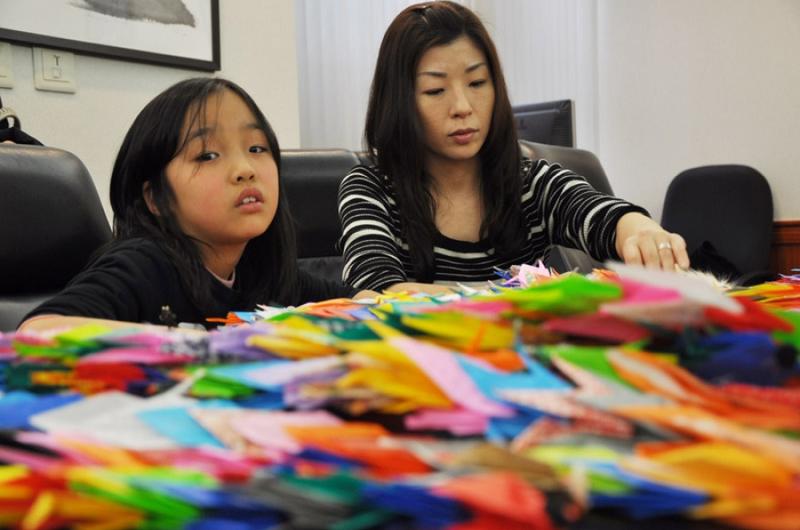 Fukushima evacuees Rico Osawa, and her mother, Shoko Osawa, attend a ceremony presenting U.S. Navy sailors with strings of paper cranes at Yokosuka Naval Base in February. Japanese citizens and others belonging to the military spouse-led Helping Hands for Tohoku charity group made the cranes. Japanese citizens and disaster survivors also wrote personal thank-you notes to the sailors who provided aid during the disaster.

YOKOSUKA NAVAL BASE, Japan — The Fukushima disaster victims were gathered at the Kawasaki community center, eagerly awaiting a blanket or a pair of sandals, when Masako Sullivan first walked in the door. It had been about a month since the 102 people living in the community center’s gym fled their homes with little more than the clothes on their backs, shortly after the Dai-ichi nuclear plant’s reactors began spewing radioactive fallout.

Sullivan dropped off eight pairs of sandals, which were immediately grabbed. One girl hugged the $5 sandals as if they were precious treasures, Sullivan recalls.

Later, an elderly woman approached Sullivan beside one of the donation tables and thanked her. Sullivan asked whether she needed anything.

“Just your thoughts are more than appreciated,” the elderly woman said.

“If I could maybe ask for one pair of socks,” Sullivan recalls her saying. “I don’t want to ask for more, because there are other people suffering, too.”

Sullivan looked down at the woman’s threadbare socks. She had been washing that same pair every day since evacuating Fukushima.

When Sullivan returned home to Yokosuka Naval Base, where her husband is an officer aboard the USS Mustin, she posted the woman’s story on Facebook. About 20 of her friends agreed: We need to do more to help these people, both materially and emotionally.

They created Helping Hands for Tohoku, a charity run primarily by Navy spouses that has blossomed to more than 200 members in Japan, the United States and Europe. The group is not officially affiliated with the U.S. military because of the legal issues, Sullivan said.

Its efforts have far surpassed Sullivan’s first simple acts of kindness. Members are sponsoring 40 families in temporary homes in Minamisoma, a city in Fukushima prefecture. Monthly care packages include whatever those families need at that moment.

The group also does what it can to provide emotional support. It holds mixers in the Yokosuka area, where displaced families socialize with military families.

Helping Hands’ efforts — along with those of the U.S. military during Operation Tomodachi — have earned praise in hundreds of hand-written notes from survivors. The spouses and the Japanese also made origami cranes that now reside aboard U.S. Navy ships.

Reiko Suzuki, whose Helping Hands-sponsored family lives in one of the temporary homes in Minamisoma, knew nothing about the U.S. military in Japan before the disaster. Suzuki said she was impressed by the military’s larger efforts, such as its helicopter supply lifts, but also impressed by the commitment of its families.

“To continue to give support for such a long time is not an easy thing to do,” she said.

On March 11, 2011, Suzuki was on her way to pick up her mother-in-law. She was driving on Route 6, a major road that runs through Fukushima, when the earthquake hit.

“The road started to crack right in front of me and I couldn’t go any further,” Suzuki said. “I turned back and went home and climbed the small mountain behind my house barefoot to escape the tsunami.”

Although the earthquake, tsunami and nuclear fallout combined to create something unique, the crisis that Suzuki and so many others survived has served to create a special bond among spouses who have survived other disasters.

Jennifer Jeffrey, a Navy spouse and native of Pensacola, Fla., lived in a hotel for a month with her children and husband after Hurricane Katrina struck their on-base residence in Mississippi in 2005.

Her experiences motivated her to do more than just donate money to Japanese victims.

“So much was done for us after Katrina, I felt like it was important for me to give back on a personal level,” Jeffrey said.

Mari Shinkai said the personal interactions meant the most to her. Shinkai is living in Yokosuka with two of her children. Her husband remains in Fukushima, where he works at the Dai-ni nuclear plant.

“There were times when I was broken, but they helped me get through,” Shinkai said of the group.

“At first I thought, ‘Why me? Why do I have to go through this?’ But those hard times are giving me so much energy now. Because I hit the bottom, I was able to come back up to meet these wonderful people.

“I remember the stars that I saw the night of the earthquake and can’t help but think they represent the people who died in the tsunami,” Shinkai said. “I might have died that day. I’m going to live each day to the fullest. I’m going to live for those who lost their lives.”

For information on joining or contributing to Helping Hands, e-mail helpinghands4tohoku@yahoo.com.