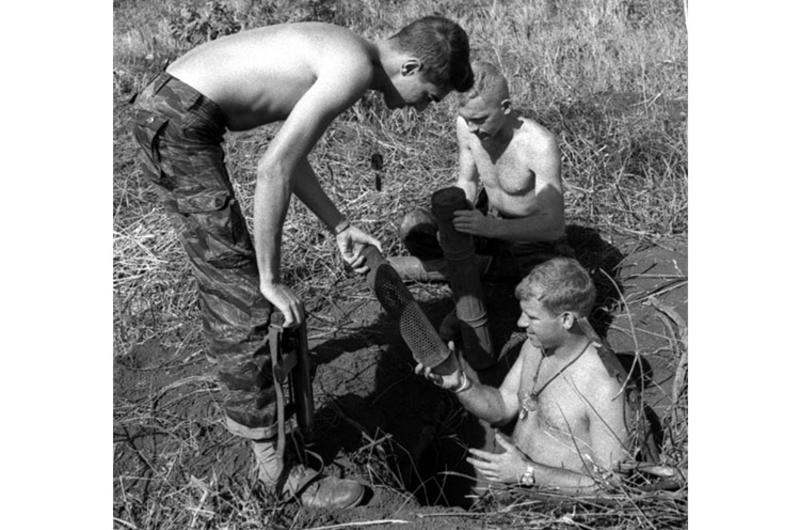 Three of the men who withstood the siege of Plei Me — Staff Sgt. J.A. Giezentanner, Sgt. Daniel Shea and Spec. 4 N.R. Walsh — examine the contents of a hole dug by Communist forces during the 1965 battle.

By Wallace Beene | Stars and Stripes

PLEI ME, Vietnam — Most people would be more inclined to fight their way out of Plei Me rather than fight to stay there.

Stuck away in a remote corner of the central highlands, the outpost is whipped by winds that send red dust swirling through the drab buildings. During the rainy season mud replaces the dust.

Around the camp is scrub brush that can — and did — make it possible for the enemy to move within 50 yards undetected.

The nearest neighbors are at another fortified village, Duc Co, some 20 miles away.

It is a place where there is nothing to see, little to do, and only a very few people to do it with.

But at the end of the year that saw the Vietnam war grow from a guerrilla operation to a major conflict, the battle of Plei Me stands as the turning point.

Until the bloodbath that started during the dark hours of Oct. 19 took place, the communists were not convinced the U.S. forces would stand and fight in a pitched battle where the losses were certain to be heavy. It was, in effect, the first fixed battle of the war.

The camp itself was not the main objective of the attack, in the opinion of most officers involved.

"Most everyone seems to feel their main objective was to ambush the relief column," explained Capt. Harold M. Moore, commander of the Special Forces unit at the camp.

"But," he added, "I'm convinced they had every intention of taking the camp, too."

Moore's feelings are understandable. At the age of 24, and with seven years in the Army, he took over the camp just two weeks before the attack. All had been quiet in the area during the previous months.

Moore, of Pekin, Ill., had only seven enlisted men and about 250 Montagnard tribesmen to defend the triangular camp.

Five barriers of wire surrounded the low wooden buildings and the bunkers where youngsters of 10 and 12 pull guard duty with their fathers.

"The first sign of trouble came about 7 p.m. when one of our patrols was hit," Moore explained. "They had to fight their way out and most of them got back into camp the next morning."

Three hours later an outpost about 2,000 yards from the camp was overrun by two companies of Viet Cong. "But they couldn't take it until the ammo ran out," Moore said. "The 25 men went down fighting."

At 11 p.m. the assault on the main camp started. "First came the mortars and the 75mm recoilless rifle fire. Most of our casualties inside the camp came within the first few minutes," Moore said.

The battle raged throughout the night. Two attempts were made to blow up the gate, but knocked back. The first air strikes roared in at 1:30 a.m. blasting targets right up to the wire as flare planes illuminated the area.

Before the week-long siege ended, the planes flew 585 strikes and transformed the area around the camp into a battered no-man's land like the battlefields of World War I.

Firing from holes dug earlier in the night, the Viet Cong returned the machine-gun fire from the planes.

"One Skyraider made three dives on a machine-gun nest and got return fire each time," Moore said. "The fourth time there was no return fire."

Moore frankly admits that he had little hope of surviving the first night. Some 1,000 Viet Cong were pressing the attack and bodies were stacking up along the wire. Planes reported the surrounding hills swarming with enemy troops.

By good fortune the Americans escaped injury the first night, but shortly after sunup a helicopter crashed 500 yards from the camp.

Since the VC assault had come from the opposing side, Moore decided to take out a small patrol and attempt to rescue the chopper crew.

With him were Sgt. Daniel Shea and SFC Joseph Bailey, plus 10 Montagnard troops.

Shea recalls, "We got out of the gate OK and turned right toward the airstrip. Just before we started to cross it, they opened up with machine guns from hidden bunkers dead ahead of us."

Bailey was killed and Shea was hit in the arm before the patrol could get back into camp.

"We thought the VC would leave during the day, but they didn't. — The fighting continued heavy on through the afternoon," Moore added.

The first reinforcements came when 12 Americans and 250 Vietnamese Rangers were dropped at the camp and quickly joined in the fighting.

In addition, an 85-man patrol out on a six-day swing through Viet Cong territory learned of the assault and fought their way back into the camp despite a warning to stay clear.

The armored relief column coming from Pleiku — 25 miles to the north — was hit by Viet Cong firing from fixed positions along the dirt roadway, but instead of pressing forward as expected, the column spun around and withdrew in the direction it came until the attack was broken off. Then they moved forward again.

On the third morning after the attack a combined force of 250 men went out of the camp to take on the VC in their own territory. An American captain was killed and another was injured, but the patrol accounted for some 35 of the enemy.

The next morning another patrol led by Special Forces advisers went out.

"Our training is to do the unexpected, so instead of staying behind the barricades, we moved out," Moore explained.

By this time Moore and his men had been four days without sleep.

"One man went to sleep while firing his mortar. I went over and found him leaning against the barrel."

Moore's luck also ran out during the fourth day.

"I was listening to President Johnson on the radio when I got hit by shrapnel. They gave me a shot of morphine and that was all for one."

Fortunately for all concerned, two medics assigned to the camp, SSgt. J. A. Giezentanner and SP4 N. R. Walsh, who had been away at the time of the attack, made their way back on a helicopter evacuating the wounded.

"I was in Da Nang and ran into a friend who told me that he heard I had been killed," Giezentanner said. "That was the first I knew about the attack."

Today the Plei Me area is quiet again. Moore and Shea have recovered from their wounds and continue to man the outpost along with Giezentanner and Walsh.

Around the camp the scars are rapidly disappearing into the underbrush. An occasional body can be found with the skull staring up into the sun, and the fields are littered with live shells and unexploded mortar rounds. Scraps of metal from the napalm bombs still hang in the outer wire.

Where the Montagnard village once stood at the entrance to the camp, now only black ashes remain. The families have all moved inside and live in bunkers along the defensive line.

The small souvenir American flag that was hoisted by the men during the battle is gone. It. went to the wife of Sgt. Bailey.

Moore and Shea feel the camp will be attacked again one of these days. They. feel the Viet Cong needs a victory there to offset the battering defeat they received the first time.

Nor do Moore and his men feel their position is too strong to be taken.

"Any point can be taken if the enemy is willing to pay the price," he added.

This was true at another dusty fortress defended by Americans — the Alamo — but Moore and his men intend to make the asking price for Plei Me too high.