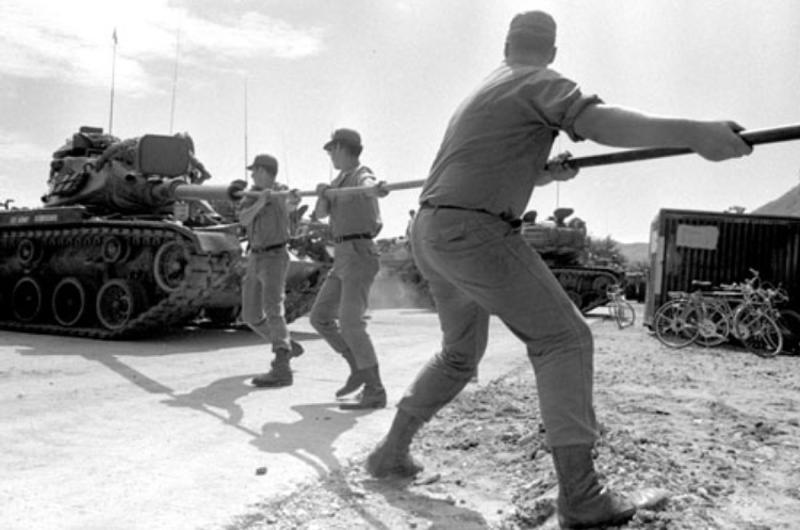 Camp Casey, South Korea, September, 1975: With a major Army inspection looming, 1st Battalion, 72nd Armor, 2nd Infantry Division tank crew members use a 20-foot pole tipped with a wire brush to clean a tank's 105 mm gun barrel. Inspection worries aside, it's a routine but important chore; as the outfit's commander, Lt. Col. Mark L. Dembinski, put it, "the winner in a tank fight is usually the one who gets off the first round."

By MIKE GOSE | STARS AND STRIPES

CAMP CASEY, Korea — Being a tank crew member with the 1st Bn., 72nd Armor, 2nd Inf. Div., isn't all bright lights and fame. It's grease on the face, fatigues soaked with engine oil, and some back-breaking work.

"I'd say these tanks spend four hours in maintenance for every one hour of operation," Lt. Col. Mark L. Dembinski, the outfit's commander said. "And the crews are out there with our mechanics."

Dembinski is a lean and gruff man, who shows his 17 years of tank service in his talk and carriage — both straightforward. He and his crews seem to blend smoothly with their tanks.

Fifty-four of the behemoths, representing the battalion's three companies, sat benignly while mechanics and crew members clambered over them alternately cursing and caressing them.

Engines were being pulled for normal repairs and that's no easy task. The Continental V12 engine, packing 750 horsepower, is half the size of a whole Volkswagen.

As Dembinski talked, a ground-shaking roar split the air. A B88 Retriever, the outfit's "garage on wheels," wound its way through the columns, headed for a tank needing its engine pulled.

The ungainly machines are among the most important parts of the battalion's inventory.

"Without them repairs would be almost impossible," Dembinski shouted.

"They go with us on maneuvers and we use them for field repairs and towing downed tanks."

In another corner of the tank area, three men hoisted a 20-foot pole tipped with a wire brush. Struggling, they finally managed to insert the brush in the tank's 105 mm gun barrel.

With a collective shout and shove, the rod was run through the barrel, pulled back out, and the process repeated.

Dembinski and his outfit were getting ready for a major Army inspection, but the cleaning is a normal chore for the unit.

"The winner in a tank fight is usually the one who gets off the first round," he said. "The Israelis learned that the hard way."

From sighting an enemy to firing, his crews have about seven seconds. That means not only men but machines must be ready for combat, he said.

As one crew chief put it, "We haven't had to use 'em, but it's sure nice to know they're here and ready. We want to keep 'em that way."