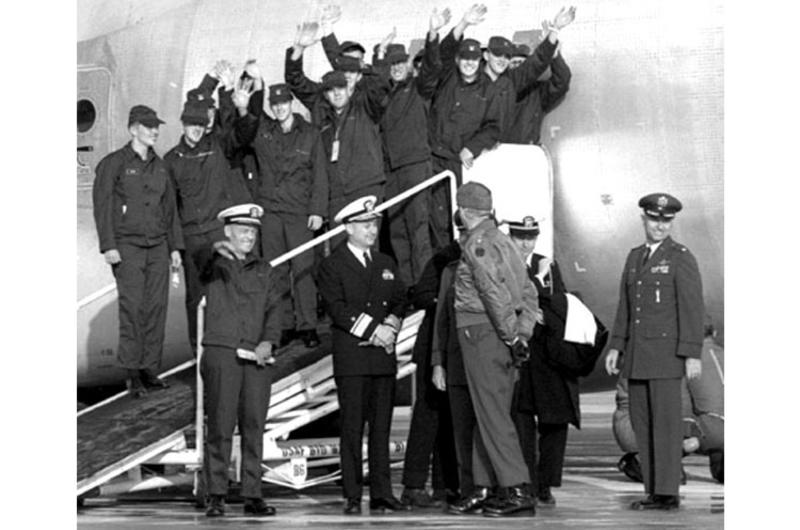 Cmdr. Lloyd Bucher, front left, and USS Pueblo crew members wave to the crowd as they prepare to leave Kimpo Air Base.

UNITED NATIONS COMMAND ADVANCE CAMP, Korea — Cmdr. Lloyd M. Bucher, skipper of the Pueblo, said Monday the U.S. Navy intelligence ship was attacked and captured on the high seas and "never did that ship once intrude into the territorial waters of North Korea "

Looking tired and haggard from 11 harsh months of solitary confinement, Bucher traced the reign of terror the 82 crewmen were dealt by their North Korean captors and the courage the crew showed in the face of brutality.

He talked unemotionally to a group of 80 newsmen assembled in a cramped NCO club at the advance camp four miles south of Panmunjom, the truce site where the Pueblo crew walked to freedom.

He said he surrendered the ship because it would have been nothing but a "slaughter out there" if the Pueblo had resisted the Communist boarding. "I couldn't see them killing the entire crew for no reason at all," he explained.

He also told of brutal beatings the men received with fists, clubs and even four-by-four boards from the North Koreans.

"Commencing the week before last we went through the most concentrated form of terror that I've ever seen or dreamed of," Bucher said.

"There were many occasions when I didn't think I was going to make it," the Pueblo skipper confessed. He said many of the men were in bad shape from malnutrition in addition to the physical beatings.

Bucher lauded the spirit and faith of the crew throughout the captivity, calling them "the finest bunch of men that I've had the pleasure to serve with."

Bucher throughout the conference was adamant that the Pueblo never edged into North Korea's waters.

He explained that before the intelligence-gathering ship's departure from Japan last January he had prepared an order to his officers that "at no time would the ship approach closer than 14 miles without my presence on the bridge."

"On two or three occasions we went between 13 and 14 miles from land," Bucher said, "but to the best of my knowledge, which is professional, I can tell you that never once did we come as close as 13 miles from the land of North Korea or its offshore islands."

He said all evidence which would show the Pueblo did not violate Communist territorial limits was conveniently destroyed and that the documents the Reds produced were doctored.

In answer to a question about whether all the sophisticated electronic monitoring gear aboard ship had been destroyed, he said his crew had tried to demolish it but was not totally successful.