What better place to say sayonara?

What better place to say sayonara? 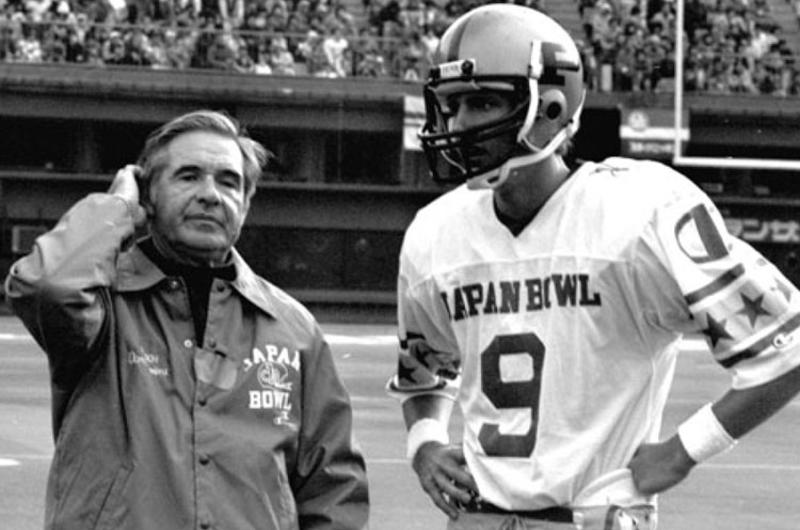 By Lee Kavetski | Stars and Stripes

"I always thought of myself as an educator," Notre Dame's Dan Devine reminisced far from home Sunday in the final hours of his illustrious football coaching career.

"Along those lines, I felt I made some kind of a contribution to the players and to the school."

Soft-spoken Devine, successor in 1975 to a line of coaching legends from Knute Rockne and Frank Leahy to Ara Parseghian under the shadow of Notre Dame's famous Golden Dome at South Bend, Ind., paused and reflected before his final four quarters in a stadium at Yokohama, Japan.

"Football has been good to me. It has brought me great enjoyment. And it's ending here in a country I like very much."

Devine, 56, bids sayonara Sunday to 33 years of coaching when he and Tennessee's Johnny Majors direct the East All-Stars against the West, coached by Missouri's Warren Powers and SMU's Ron Meyer, in the sixth annual Japan Bowl at Yokohama Stadium.

"What will I miss the most?" He pondered a reporter's question. "The association with the young men playing the game. I've worked with some fine people, both college and professional players."

The man who brought tradition-rich Notre Dame a national football championship in 1977 ("my biggest thrill in football") and three postseason bowl victories had decided at home in South Bend last August that he would step down after the 1980 season for family considerations and personal reasons. "I want to spend more time with my family, and I can't do that and coach."

Devine conceded it will be hard for him to give up football — "The thrill of competition is hard to match in any other profession" — and said he did not have any immediate plans for the future.

But Devine left open the possibility that he might consider returning to the National Football League, where he coached the Green Bay Packers for four years.

"Perhaps some day I'll return to football. I don't exactly know. I don't have anything planned. I haven't really had the chance to sit back with my wife — she's with me here in Japan — and discuss what we are going to do. We'll back off and see how much we miss football."

"I've been so busy," he went on. "There was the Sugar Bowl game against Georgia around Christmas. Then the East-West Shrine Game in California last week and then the trip to Tokyo.

"Future plans? I've had some other coaching opportunities offered in the past couple of years but I'm not ready yet. I'll listen. But a return to coaching will have to be under the right circumstances."

Devine had said in the past that his one so-far unaccomplished goal in football was to win the pro Super Bowl championship. He's accomplished just about everything else.

Devine launched his coaching career back in 1948 at East Jordan High School in Michigan after completing his college degree at the University of Minnesota at Duluth, where he captained both the football and basketball teams.

He then served as an assistant coach at Michigan State before head coaching jobs at Arizona State (1955-57), Missouri (1958-70), the pro Green Bay Packers (1971-74) and finally Notre Dame, where he became the Irish's 34th head coach in December, 1974. Devine ranks eighth overall among active coaches with a .743 career winning percentage.

Devine considered his ninth-rated Irish's 9-2-1 performance this past season a "truly remarkable effort since our team was both very young and very injury-riddled." Notre Dame beat such 1980 powerhouses as Purdue, Michigan and Alabama.

Georgia Coach Vince Dooley conceded after the tough Sugar Bowl battle that the thinks the present system of determining the national college champion in a final poll of votes from the news media is far from perfect. He voiced a desire for a two-game playoff after the bowl games as perhaps a proper way to decide who is No. 1.

Devine agrees it would be an "excellent plan. But it will take somebody to grab a hold of the idea and work out details. In that respect, I've kicked a lot of ideas around in my; mind. A playoff between six or eight teams could do it fairly. Time would be a big factor. But basketball manages with a 32-team NCAA playoff for the national college champion."

Gerry Faust, a high-school coach from Ohio, is Devine's successor at Notre Dame and the retiring Irish mentor believes he will do well. Devine admits that "Notre Dame schedules for the past five years have been going from tough to tougher." (The NCAA last year rated the Irish schedule the fourth toughest in the nation).

On a parting note, Devine extended words of encouragement to the American servicemen and servicewomen in the Pacific area. "I'm very world and international-conscious," he said. "And being an ex-serviceman myself (he had a 2½-year tour with the old Army Air Corps), I understand the job they're doing. I can appreciate a lot of their problems.

"In the overall scheme of things, they are doing a great service to the United States and to mankind."