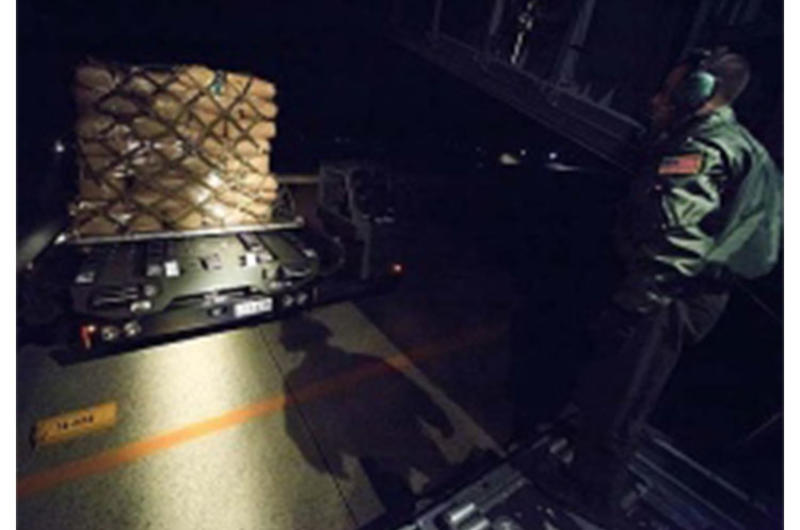 Senior Airman Brandon Lee of the 36th Airlift Squadron watches as the delivery of six pallets containing rice, water and blankets is completed to Matsushima Air Base. Yokota was the headquarters for Operation Tomodachi, the U.S. military's humanitarian assistance operation to provide relief to victims of the quake.

By Charlie Reed | Stars and Stripes

YOKOTA AIR BASE, Japan — Just minutes after a massive earthquake struck northern Japan on March 11, several flights bound for Narita International Airport were descending on this air base on the western edge of Tokyo.

In the weeks that have followed, some 1,300 military and government workers have converged on Yokota, which has become the primary logistical hub for “Operation Tomodachi,” the U.S. humanitarian assistance efforts to help the tsunami-ravaged northeastern coast. At the same time, the Defense Department has used the flightline here to whisk thousands of military dependents back to the U.S. amid growing fears of radiation leaking from the Fukushima Dai-ichi nuclear power plant, about 130 miles to the north.

Suddenly, this usually sleepy airlift base has been transformed into the U.S. military equivalent of Grand Central Station.

“You would have been laughed out of the office if you ever drew up a plan like the one we’re dealing with today,” Feather said of the enormity of the triple-pronged disaster playing out in Japan.

As expected, U.S. troops are swiftly working their way into the heart of the country’s tsunami-ravaged northeastern coastline by air, sea and land. American servicemembers are now playing a key role in helping weary survivors in communities swallowed whole by the giant tsunami and clearing the subsequent wreckage suffocating major infrastructure.

Many emergency crews are launching from a cluster of 19 U.S. Navy ships and 140 aircraft posted off the devastated northeastern coast, or from Misawa Air Base to the north. More Navy ships, from Yokosuka Naval Base, are delivering fresh water as Japanese workers try to cool nuclear reactors at Fukushima.

Yokota, meanwhile, is providing heavy and tactical airlift for supplies, equipment and personnel bound for the disaster zone. Planes full of aid from foreign government and civilian non-governmental agencies around the world land at Yokota constantly.

Units from the Royal Australian Air Force, U.S. Pacific Command headquarters in Hawaii, and the United Nations Command are operating from Yokota. The III Marine Expeditionary Force out of Okinawa — which is leading U.S. military efforts in Sendai — also has set up shop here.

In all, roughly 13,300 U.S. military personnel from across the region have been assigned to the round-the-clock Operation Tomodachi effort. But there also are civilian organizations who have planted a flag at this base, which sits about 35 miles west of Tokyo.

U.S. Agency for International Development has a representative on the base, although it does not plan to set up a large operation in Japan because of the resources and assistance already in motion, said Mark Bartolini, director of USAID’s Foreign Disaster Assistance.

Meanwhile, the Department of Energy, an Air Force radiological testing team and various military commands from around Japan are also on site.

And don’t forget the thousands of U.S. family members looking to escape Japan. One-half of the 10,000 military community dependents who signed up to depart Japan were gone by Saturday, many leaving from Yokota’s flight line.

“It’s a multitasking mission,” Valley said. “The guys on the ground up north are mainly concentrated on doing their job. And we’re making sure they have the equipment and personnel to do job.”

On Saturday, Yokota aircrews began flying out 1 million pounds of water to the tsunami-ravaged north, only a snap-shot of the frenetic 24-hour U.S. military operations under way around Japan.

“Turn and burn” missions like Saturday’s water run are moving supplies, personnel and equipment by the ton from Yokota to Sendai Airport and other barely functioning airfields cleared from the wreckage left by the tsunami.

Compared to the pre-quake tempo at Yokota — a brass-heavy headquarters base for U.S. Forces Japan and the only U.S. military airlift in the region — the pace has reached a fever pitch as the base has become ground-zero for a military mission with no end in sight

Its once-empty apartment towers are now filled with some of the 1,300 additional personnel working out of Yokota in the aftermath of the natural disaster.

“This is what we were built for,” Feather said, noting his base’s perfect, but unplanned for, position as a contingency base in the Pacific.

It wasn’t until last year that Yokota carved out hundreds of emergency quarters from a housing surplus that had amassed in recent years as the military’s footprint at Yokota grew smaller as units were deactivated or left Japan.

Other visitors working, living and travelling through Yokota vary from food-service personnel brought in from Hawaii to man Yokota’s chow hall to reservists from middle America augmenting USFJ.

But while American-style streets and neighborhoods on Yokota are hushed because of the exodus of family members, the runway here is anything but.

In addition to the countless relief and evacuation flights, a helicopter carrying Feather and Energy Department scientists left Yokota to a site 15 miles from the crippled reactors in Fukushima to collect soil samples. Like most of the scene unfolding in Japan from his perspective, seeing the source of the radioactivity scare was “surreal,” Feather said.

In fact, one of the first crews to pass through Yokota following the quake has already come and gone.

An Australian fire-rescue crew returned to Sydney last week after its mission to recover tsunami survivors in Miyagi was cut short on the heels of days of fruitless searches. The devastation looked as if the ocean “had vomited up everything in and on top of the water at the time of the quake onto the coastline,” said Ian Krimmer, superintendent of the New South Wales Fire Brigade.

The 70-man unit left 13 of the 20 tons of equipment, supplies and anything they could spare for the Japanese.

While news of the voluntary evacuation of Americans trickles out to the Japanese public and problems in Fukushima persist, military commanders emphasize their solidarity with the Japanese.

“We’re doing everything we can to be locked at the hip with our Japanese allies,” Feather said. “These are not just refugees we are helping. These are our friends and family.