After wartime terror and defeat, a life rebuilt around America

After wartime terror and defeat, a life rebuilt around America 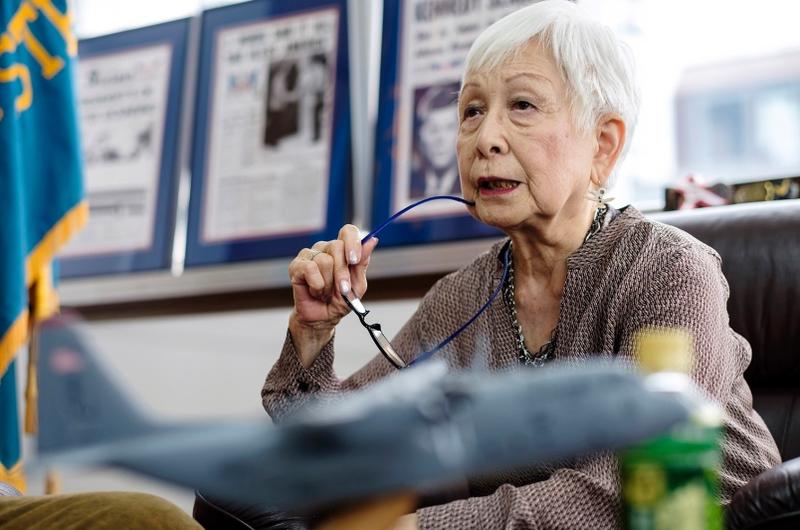 Toshi Tokunaga spent her teens in a world of air raids, shortages, death and at the end, the shock and humiliation of defeat. Over time her life transformed as she went to work for the occupation forces and later for Stars and Stripes, where she built a career and met her husband. Now living in Delaware, Toshi Tokunaga Cooper recalls her own personal journey - part of Japan’s transformation from bitter enemy to close ally of the United States.

YOKOTA AIR BASE, Japan —Toshi Tokunaga Cooper and her coworkers listened on the radio as Emperor Hirohito announced Japan’s surrender to the Allies on Aug. 15, 1945. It was the first time the Japanese public had heard his voice, and the news was devastating.

“We stood in the courtyard and listened to the emperor’s speech and cried like hell,” recalled Cooper, 89.

After hearing of their nation’s defeat, Cooper and several friends walked from Tokyo’s Ebisu district to the Imperial Palace, where they wept and apologized to the emperor.

“We were very nationalistic,” she said. “I heard later that some of the people around us had committed suicide.”

Civilian life in wartime
The end came as a shock to the Japanese people, even if many had suspected that the war was not going as well as it was spun by the government’s propaganda machine. For many in reclusive Japan, America was a strange and distant place.

When news of the Pearl Harbor attack broke in December 1941, Cooper’s father, a civilian contracting officer in the Imperial Japanese Navy, spread a big map of America on a table and compared it to Japan. Her father was fascinated by foreign things and spent time in London before the war. The family ate English breakfasts of toast, eggs and coffee on Sundays and celebrated Christmas, she said.

The start of the war meant she couldn’t watch her favorite American movies. Tokyo cinemas stopped showing them and only screened German, Italian and Japanese films, she said.

Despite official efforts to put a positive spin on news from the front, it was hard to believe that Japan was winning – casualty lists were growing and rations were short. American bombers pounded Tokyo, destroying entire neighborhoods near Cooper’s home in Tokyo’s Shibuya district. At times it seemed as if the bombs were dropping only a few yards away.

Some of Cooper’s schoolmates were killed in the air raids.

“There were so many people who had a terrible time,” she said.

Still, to a young person, the war seemed exciting.

Workmates at the Navy yard in Shibuya, where Cooper was a supply clerk, would arrive each morning with captivating stories.

One woman said she left a pot full of raw rice when she fled to an air raid shelter. When she returned, heat from bombing had cooked the rice, Cooper said.

Her family had a bomb shelter in their back yard stocked with food and supplies. But after a heavy snowfall, the shelter flooded. When the family opened the shelter door during an air raid, they saw all their carefully stored supplies floating in deep water.

News of the atomic bombings at Hiroshima and Nagasaki was vague at first, Cooper said.

“The radio talked about a strong weapon being dropped,” she said.

Life in the postwar
When Allied occupation troops arrived in Tokyo after the surrender, residents were scared. Tokyo was a battered city where black markets sprung up to meet the demands of hungry masses and exhausted soldiers returning from far-flung battlefields.

Australian soldiers set up camp near Cooper’s house. There were rumors that they were abducting young girls, and families kept ropes ready so they could escape out the window if the soldiers came for them.

Cooper got a shock when she rode a train to the countryside to trade kimonos for food and felt the hands of a tall Australian lifting up the bag of rice on her back.

“I yelled in English: ‘I’m not a street worker.’ But he was just trying to help me carry the bag,” she said.

Cooper’s father was angry when she got a job in the Public Information Office (PIO) at Allied headquarters, where Gen. Douglas MacArthur ruled Japan during the post-war occupation. He wanted her to get married. She argued that the job would help improve her English _ a valuable skill in U.S.-occupied Japan _ which she had learned at a Methodist high school.

Soon she was working as a linguist for American reporters. Her English was poor but good enough to do the job and earn her gifts such as bars of soap from the journalists.

When the chief of the news section at the PIO, Maj. Fred May, took command at Pacific Stars and Stripes in 1948, he invited Cooper to join as an assistant librarian.

Cooper started building contacts with Japanese officials whom she won over with cigarettes and chocolate from the Post Exchange.

“There were few female Japanese journalists in those days, and they had a terrible time compared to the males,” she said. “But I could do anything I wanted.”

It wasn’t long before Cooper was going on assignment as a translator. A memorable assignment involved tracking down Marilyn Monroe, paparazzi-style, when she visited Tokyo in 1954.

Stars and Stripes staked out Haneda Airport, where Monroe and her new husband, famed baseball player Joe DiMaggio, touched down, but there were so many people — “2,500 wild fans” — that the journalists decided to give up and “go get drunk,” Cooper recalled.

“We started driving home, but I saw blonde hair in the car in front of us,” she said. “I said: ‘Let’s follow!’”

The car traveled to a back entrance at the Imperial Hotel — avoiding 1,500 more fans at the front — and out stepped Monroe. Stars and Stripes got the story and photo. Cooper got an autograph.

During the 1964 Tokyo Olympic Games, Cooper helped make posters of the U.S. military athletes who were participating. She moonlighted as a translator for some of the foreign reporters who attended the Games and received plenty of free tickets in return.

Cooper was the translator for Stars and Stripes reporter Army Cpl. Ernie Peeler for his interview with Princess Kazuko — elder sister to Japan’s current emperor, Akihito. She was about to become the first member of Japan’s imperial household to marry a commoner. Cooper said they had a tough time persuading the princess to smile for a photo.

Before the story could appear, Peeler left for Korea, where U.S. Forces were fighting to hold their own against a communist invasion. On July 28, 1950, he and another journalist, Ray Richards of the International News Service, were declared missing in action — perhaps killed by a tank shell that blew their Jeep off the road.

In 1970, she married fellow Stars and Stripes employee Gary M. Cooper and retired the following year. She is now chairman emeritus of the Stars and Stripes Association — a group of former employees that holds annual reunions in the U.S.