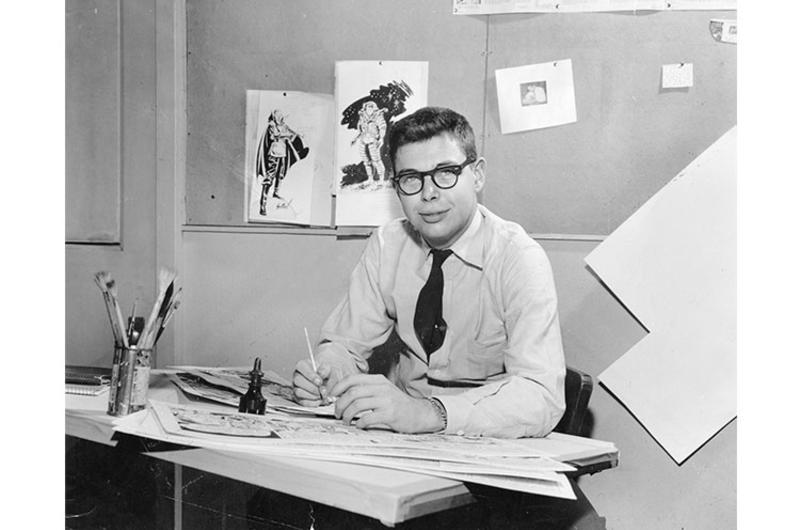 THE ARTIST who draws Stars and Stripes' daily comic strips, "Johnny Craig." is A/3C Tom Sutton, shown at his drawing board.

Long before artist Tom Sutton began contributing to Marvel Comics and the popular Warren Publishing series “Vampirella,” he was sharpening his drawing pencil, and his skills, at Stars and Stripes’ office in downtown Tokyo.

The Massachusetts native joined the Air Force in 1955 and was later stationed at a base near Osaka, Japan, before being assigned to the newspaper, where he created a daily strip titled “Johnny Craig,” named after one of his favorite comic book artists.

The sci-fi comic took place in 2058 and followed a rocket pilot whose “quest to find a second Earth leads him into undreamed of dangers among the stars.”

A story published in Stars and Stripes the day “Johnny Craig” debuted said the then-20-year-old Sutton got his start “earning soft drink and malt money by illustrating comics for Weird Science Fiction, Vault of Terror and Starman comic books for $45 per eight-page story while his high school pals were still peddling newspapers for pennies.”

According to “It Crept from the Tomb,” a book on horror comics edited by Peter Normanton, Sutton’s early work received praise from legendary artist Norman Rockwell.

While in high school in the late 1940s, Sutton took a correspondence art course and his assignments were graded by Charles Schulz, who was trying to get “Peanuts” off the ground at the time.

After leaving the Air Force and finishing college in New York, Sutton took his Stars and Stripes comics to Marvel, where they were reviewed by Stan Lee, co-creator of iconic characters like Spider-Man, X-Men and the Incredible Hulk.

“I think he was rather impressed by the fact that I had actually done a daily comic strip for two years,” Sutton told The Comics Journal in 2001. “He just reached over and he pulled off this huge pile of blank paper. And he said, ‘OK, do me a couple of Westerns and I’ll see you next week. Have fun.’ I remember that very well. ‘Have fun.’”

Sutton, best known for his writing and illustration work on the popular “Vampirella” horror series, looked back fondly on his time with Stripes, which he called “my art school.”

“I remember one of the first jobs I got was they wanted me to draw this temple and some GIs or something, and they tossed a couple of photographs on the drawing table, and they said, ‘You’ve got 45 minutes!’ Forty-five minutes?” he told The Comics Journal. “There were men there who had worked at Collier’s, who had worked at Saturday Evening Post, who had worked on various other magazines, you understand what I’m saying? That was real. I don’t think there is anything better than what we used to call on-the-job training or apprenticeship.”

Sutton, who also worked under the pen names Sean Todd, TFS and Dementia, died of an apparent heart attack in May 2002. He was 65.