Cowboy military cartoonist has had quite a ride

Cowboy military cartoonist has had quite a ride 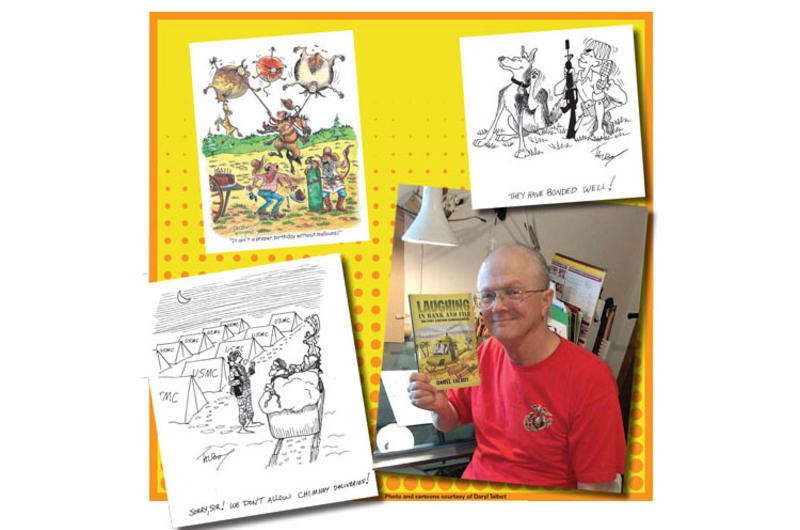 Daryl Talbot has been making people think, laugh and cry with his cartoon for decades. He’s a cowboy at heart who also knows a thing or two about the military. In fact, he’s served in all four branches of the military. His work will now start appearing in Stars and Stripes community papers and websites. Stripes Guam recently sat down with Talbot over email to breakdown his interesting career. 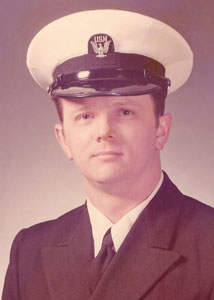 : All right, first all, you spent 22 years in the military, serving in the Marine Corps, Navy, Air Force Reserve, Army Reserve and Oklahoma Air National Guard. How did you accomplish that?

A: Yes, I served in four branches of the U.S. Armed Forces, five if you count the Oklahoma Air National Guard as a separate branch. It was not planned. If I had planned it, I would have orchestrated it better. My life was planned like a recon patrol with me at point. Move forward and be ready to react to whatever happens.

I was an Air Force Brat. Only a kid growing up with a parent in the military knows the kind of life we have. I started first grade in a suburb of Los Angeles, California and graduated from high school in 1963 in Springfield, Va., and attended school in several states in between. It makes a person rather flexible in decision-making and free to think outside the box, important for a cartoonist. I always wanted to be a cartoonist and artist, maybe join the Army as an illustrator, but my parents had other plans. Go to college. Try it for two weeks and if you don’t like it you can quit.

Well, after two weeks in a small junior college in a very small town in southern Oklahoma, my home state, I knew it wasn’t for me, but I don’t like being a quitter. Craving mail of any kind in this little school, in this little town, I mailed out cards for information on the Army, Navy, Air Force and Marine Corps. Wow! I got lots of mail. But, the Marine Corps recruiter visited me on campus. He traveled all the way from Oklahoma City to this little town and junior college. Well, it just wouldn’t be polite not to join. So, when the semester ended I flew, my first time to fly, all the way to San Diego and the United States Marine Corps. 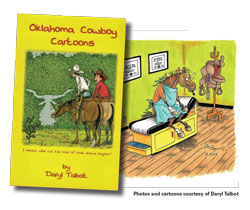 It was a lot different than being an Air Force Brat. I did my four years and avoided going to Vietnam three times. I attended Oklahoma State University, majoring in art and got married. When I graduated, I worked as a technical illustrator for a company in Dallas, Texas with limited income and few opportunities for advancement when the Navy offered me a Naval Aviation Navigator training program. I passed the testing, the physical, but failed the eye exam. But they suggested joining the Navy with the Direct Procurement Petty Officer Program. They calculated my years of experience in my special field and enlist me at the equivalent petty officer level and then I could apply for Officer Candidate School. I tried that. In 1973 when I joined the Navy they had an overage of junior officers and shut down OCS. for a period. Disappointed, I served my four years and returned to civilian life. 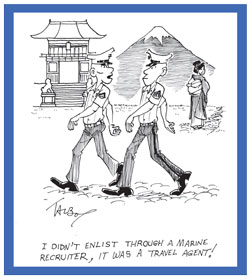 Then after four years of working in the Texas Education Service Center and Lone Star Steel training department, I began receiving letters requesting I return to the Navy. They kept coming in the mail. They finally offered me Navy Reserve service with free medical after age 60. That was my drawing card. I checked with Navy Reserves an Army Reserves, but the Air Force Reserves made the best offer. So, I joined them. After 5 years the civilian job market in East Texas where we lived dried up. We had to relocate to find work. Moving back to Oklahoma near family seemed the best choice. That’s when I transferred to the U.S. Army Reserves as an illustrator with the 95th Division in Oklahoma City. It was great. I was doing what I loved, cartooning and illustrating.

To advance in rank I had to attend a two-week Platoon Leaders Course. I finished in second place among all of those younger soldiers. But when I got back to my unit, the Army decided I needed to go to Infantry School. I was in my mid forties. Help. I wrote a letter to the general requesting to transfer back to the Air Force Reserves. The letter was tear-stained. My request was granted. The local Air Force Reserve Unit didn’t have any opening, so, I tried the Oklahoma Air National Guard. Bingo! They needed people. That was my fifth and last branch. I retired with 22 years. Actually, I transferred to the Retired Reserves. You accumulate points, but you don’t have drills. Basically you are available for recall if needed. I was never needed.

Q: You are proud of your military service, but also proud to be a cowboy, eh?

A: Why do I include Cowboy in my work description? Being from Oklahoma, where was born, I came from pioneer stock. One grandmother came to Oklahoma when it was Indian Territory in a covered wagon and my other grandmother was of Choctaw ancestry, farm and ranch people. Also, I grew up with cowboy heroes. Hopalong Cassidy, Gene Autry, Roy Rogers and John Wayne in the movies and later on television. My friends and I played cowboys with our cap guns and stick horses. 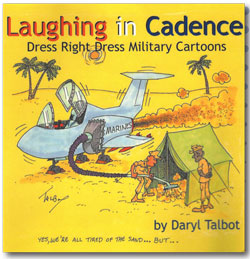 Q: How did you get started drawing cartoons?

A: Starting at an early age, about 3 years old. I was always drawing horses, cowboys and soldiers. I used to draw my own comic books. I would write my own stories and draw each page to make a comic book. It made me popular in school, especially with the girls. I cartooned for horse magazines starting back when I was in the Marines and continued to the present. While I was in college I started cartooning for military magazines, especially Leatherneck Magazine, which I still do today.

Q: Tell us about your themes for your military cartoons and what you are trying to tell your audience.

A: Drawing military cartoons I try to share some of my experiences and those of my veteran friends. I try to avoid tragic subjects. There can be humor even in tragic situations, but they’re not for general sharing. 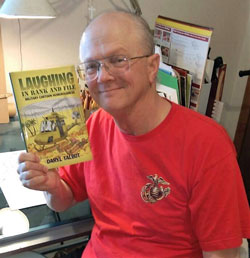 I leave that invasion to the news media. However, I have been known to be critical about certain military policies and procedures and it has gotten me in hot water at times when I was in active service. I find the majority of my humor in basic training. Recruit ignorance can be very entertaining.

Q: What are you most proud of?

A: I believe my greatest pride is being a member of a very special and exclusive family of brothers, the United States of America Veterans.