Getting 'more bang for the buck' out of Guam

Getting 'more bang for the buck' out of Guam 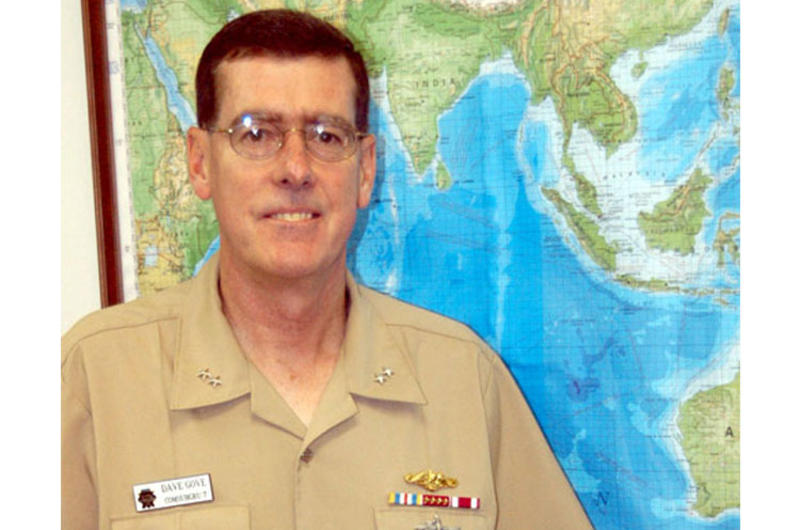 Rear Adm. David Gove, who heads up Submarine Group 7 and commander task forces 74 and 54 out of Yokosuka Naval Base, Japan, is responsible for submarine activity on nearly half of the Earth’s surface.

Rear Adm. David Gove, who heads Submarine Group 7 and commander task forces 74 and 54 out of Yokosuka, also lauded the “incredible individuals” who’ve propped up Guam’s burgeoning naval hub and said it might receive a guided-missile submarine in future to boost the two nuclear-powered attack vessels now assigned there.

“We called it the ‘Guam experiment,’” said Gove of Submarine Squadron 15, which includes the tender USS Frank Cable and attack submarines USS City of Corpus Christi and USS Houston. “I wasn’t sure it would be doable. But we flowed resources in there and found it’s absolutely doable.

“We’re trying to get a higher operational impact. We can run more missions over shorter distances down there and get more bang for the buck. It’s contributed greatly to our presence out here.”

Gove, commander of all submarines operating in the Pacific and Middle East — including those deployed out of San Diego and Hawaii to the 5th and 7th Fleets — touched on a range of issues Tuesday ahead of this week’s change-of-command ceremony. He’s to turn over the leadership post to Rear Adm. John M. Bird on Friday aboard the Frank Cable.

A 1975 Naval Academy graduate, Gove next will direct the Navy Personnel Command at Naval Support Activity Mid-South in Millington, Tenn. Bird, slated to become the submarine group’s 39th commander, arrives from the U.S. Joint Forces Command in Norfolk, Va., where he was director for operations, plans, logistics and engineering.

Commander Task Force 54 directs all submarine operations and missions for Central Command, including in the Red Sea and Arabian Gulf. CTF 74 monitors movements of allied and friendly submarines in the Western Pacific and Indian oceans.

The submarine group — almost 1,800 sailors assigned to Yokosuka and Guam — engages in intelligence-gathering, surveillance and reconnaissance and is active in the global war on terror. Anti-submarine warfare, strike missions and water-space management are other primary tasks. As commander, Gove is responsible for submarine activity on almost half of the Earth’s surface, from Australia to Japan and the international dateline to Africa.

“Driving subs is not risk-free,” he said. “The environment in which we work is a relatively constrained space. It’s a harsh environment in often-congested waters. There are fishing vessels, other subs, surface ships, debris, coastal merchant traffic. Many things can cause problems out there.

“We train extensively so we can manage the waters where we’re operating. Our counterparts trust us to keep nations separated but also maintain their own counsel at the same time.”

Officials rely heavily on the U.S. Naval Base Guam operation, set up about four years ago. The Corpus Christi, which came to the island more than two years ago, has become the squadron’s workhorse, Gove said. The Houston arrived on Christmas Eve and soon will tackle national missions.

U.S. Naval Base Guam also could get one of the four new guided-missile submarines being converted from the Navy’s pool of nuclear-ballistic missile submarines. The group commander said he was unsure how soon that might happen.

Through exercises and real-world missions, he said, Submarine Group 7 has refined relationships and strengthened capabilities with several nations, including Japan, South Korea, Australia, India, Pakistan and Saudi Arabia. Regular port visits also are made to Singapore, Saipan, Yokosuka and Sasebo in Japan.

The regional threat has changed from the former Soviet Union to China and North Korea, Gove said.

He said the submarine group routinely conducts surveillance in the South China, East China Sea and Philippine seas, helped by various ships and by P-3 Orion aircraft based in Misawa, Japan.

“China has a capable and emerging modern submarine force,” he said. “Our national mission has evolved a great deal. We can always do better, with modernization of our platforms and training. … We spend a lot of time making sure we’re as good as we can possibly be.”

Gove said technological breakthroughs constantly allow for quicker turnaround in intelligence reporting for significant events. Still, he said, much of the mission entails understanding potential enemies and knowing how and where to fight.

“It’s how we won the Cold War,” Gove said. “Our submarine force spent a great deal of time … learning about how to fight a war and the capabilities of certain adversaries. If we can understand intentions and capabilities, then we can deal with it.”

Navy officials involved in the “Guam experiment” of submarines on the island certainly have encountered growing pains.

In January, the $1 billion, fast-attack nuclear submarine USS San Francisco collided with an undersea mountain near the Caroline Islands. Ninety-eight of the 137 crewmembers were injured and a sailor later died from massive head injuries.

“We’ve taken the lessons learned and tried to make our tools more effective to prevent such an occurrence,” said Rear Adm. David Gove, who heads up Submarine Group 7 and commander task forces 74 and 54. “They’ve been painful lessons, but we absolutely learned a great deal.”

He said functioning on Guam takes “a special kind of sailor.” Typhoons occasionally disrupt planning — with ships having to be moved to avoid approaching storms — and logistical problems are a part of life due to the island’s isolation.

“Most are incredible individuals,” he said. “Guam is a challenge, but we’ve made good progress. The challenges down there are things that sailors from Hawaii and the mainland don’t face. They’re manageable for us but difficult.

“The infrastructure is still developing on Guam. They’re at the end of the supply chain because it takes longer to get stuff out there. But the sailors are committed and they work so hard every day. … It’s a very effective forward-deployed port.”

A replacement for the San Francisco isn’t expected until late 2006 or 2007, Gove said.