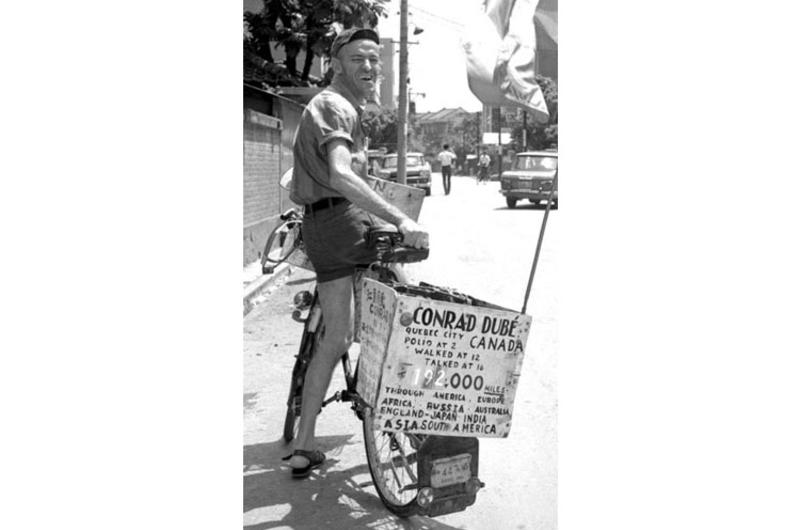 Conrad Dube, biking through Taiwan in 1968.

TAIPEI — Conrad Dube, 39-year-old French-Canadian who was crippled by polio at the age of two, has worn out 12 bicycles, 37 sets of tires and pedaled 192,000 miles around the world in 17 years to prove his will is stronger than his physical handicap.

Taiwan is the 67th country he has visited in his travels to every continent. He was recently greeted by Mayor Henry Kao during a stopover in Taipei. The lanky Dube said he plans to wind up his current tour with a bicycle trip through the Philippines, sail from Singapore to Panama and then pedal through Mexico and the United States to Quebec where he plans to work on a book for which he has 1,000 sheets of notes. Mexico and the U.S. will be old hat for him as he already has been through the area.

He still walks and speaks only with considerable difficulty, but he becomes a new man when he mounts the bicycle. He learned to ride because a doctor told him the exercise might help restore control of his partially paralyzed legs.

On a good flat road he easily covers up to 75 miles a day but when the going is rough he said he slows down to about 40 or 45.

During his travels he has visited thousands of polio victims in various countries. "I want to show polio victims the world over that they need not be disappointed, for if they try hard enough they can act as freely as normal people do," he said.

His traveling gear consists of a sleeping bag, small tent, extra clothing and other essentials weighing about 45 pounds.

He said he started his bicycle travels because physical handicaps made it impossible for him to find employment, but it has had some unexpected rewards.

In Moscow, where he visited an economic achievement exhibition in 1964, city officials wrote in his notebook, "We admire the endurance and determination which have helped you to overcome tremendous difficulties to attain your goal."

Elated, he pedaled off to the Ukraine, through central Europe and Madagascar. Then he made an 8,000-mile swing through Africa.

Besides criss-crossing the Americas and every European country, much of Asia. including India, Pakistan, Korea and Japan he has covered New Zealand, Australia and Oceania. Early in 1968 he toured Thailand, Laos and Cambodia. Because of the fighting in Vietnam he was forced to accept a lift in a Vietnamese Army truck from the Cambodian border to Saigon.

The going has been rough, but among his rewards Dube lists meeting some the world's great leaders and entertainers.

He shook hands with President Kennedy three days before the President was assassinated.

Other dignitaries he has met include President Eisenhower, Queen Elizabeth, Queen Juliana, Prince Rainier and Princess Grace of Monaco, and Pope Pius XII who gave him a papal blessing.

He has also made a TV appearance with Bing Crosby and Bob Hope.

Stories based on interviews he has given have been published in more than 2,000 newspapers. He seldom has much money in his pocket, but he claims that is usually not too much of a problem because of the kindness of individuals of every nationality he meets.

He has cycled the equivalent of seven times around the world.