Memories with Stars and Stripes

Memories with Stars and Stripes 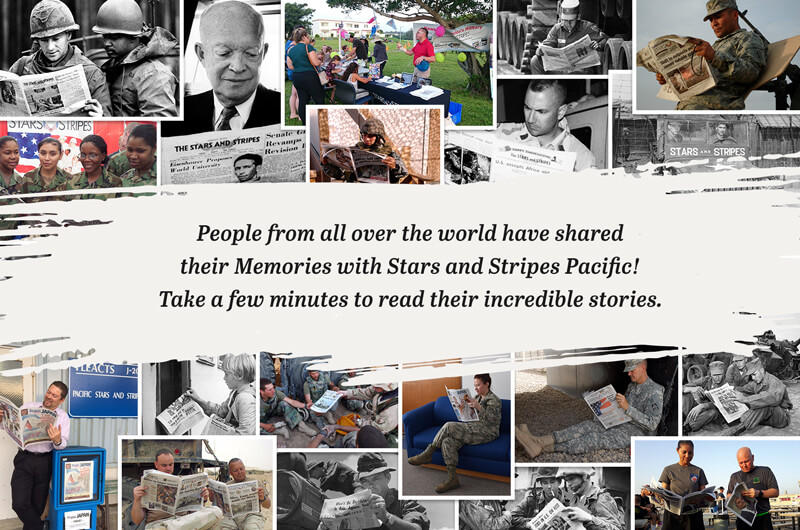 Submit the memories that you have with Stars and Stripes Pacific! Your photos and stories will appear on the official 75th Anniversary website. You can submit your memories here.

I never heard my late father, retired Marine Corps Reserve Lt. Colonel Gordon G. Scott, recall his experiences of serving at Iwo Jima during WWII until I became a reporter for Pacific Stars and Stripes. That was around 1998. I joined a group of corporals stationed at Iwakuni who flew out to the island for a poignant lesson in history. I wrote a piece for Stripes about the experience, how the eager young Marines literally ran as a unit to the top of Mount Suribachi where out of respect for the dead they stood quietly at that sacred military site. I sent a copy of the story to my dad in California.

The next time we talked, he had lots of questions about what his end of the island looked like more than 50 years later. He wasn’t part of the initial landing, which partly explains why I’m alive (and grateful) to write about him now. A junior officer fresh from officer candidate school, he was sent into action probably the fourth or fifth day. His unit was moving down the island, away from Suribachi, to do what they had to do to secure the island.

He told me that during guard duty late at night he could hear the Japanese troops talking as they emerged for fresh air from hiding in caves, sometimes just on the other side of the slopes and ridges. They had to know what was coming. He had respect for those soldiers. They held to their duty, their obligations.

He wished he could return to see the island again. His recollections were all new to me. I wouldn’t have known them except for my Stripes experience. I felt twinges of guilt that I had the chance to visit Iwo Jima in peacetime. It was my job as a working journalist to report on the history lesson. Still, it should have been him out there with those young Marines and those deep memories. 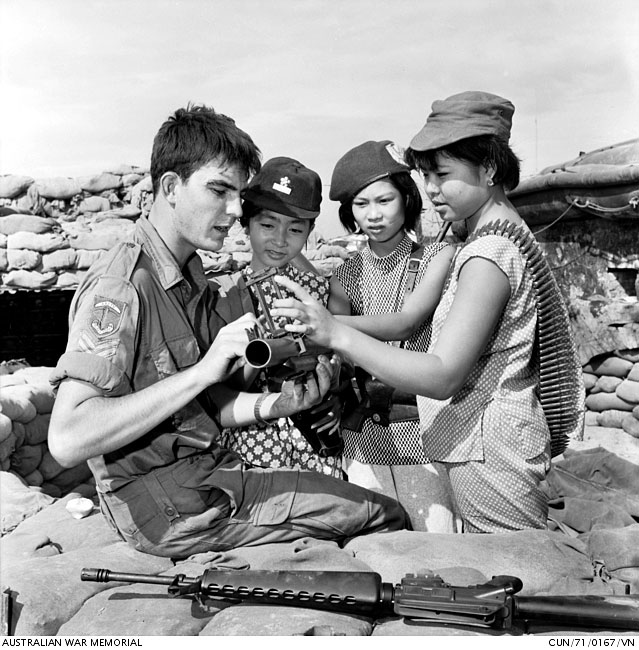 Sometime in 1971 I found myself in a situation whereby I needed to get back to my compound on Lon Song Island off the coast of Baria Vung Tau Phuoc Tuy province. My compound was an old French Fort located on the waterway entrance to Long Son island, manned by four members of the AATTV, Aust Army Training Team Vietnam.

I found myself stranded at Nui Dat, the Australian headquarters in Phuoc Tuy province, specifically on the Luscombe airfield runway, so there I stood at the end of the runway with my thumb out trying to hitch a ride, planes were taking off as were numerous choppers of all descriptions, all intent on top priority war tasks. So there I stood like a damn scarecrow at the end of the runway watching the aircraft fly over my head. Then it appeared out of the blue, a small chopper skimming the runway to land a short distance from where I was standing with a welcoming beckoning hand. I can't recall why, but I think the pilot for some reason, got out of the chopper, hence I have the picture of standing beside the chopper. 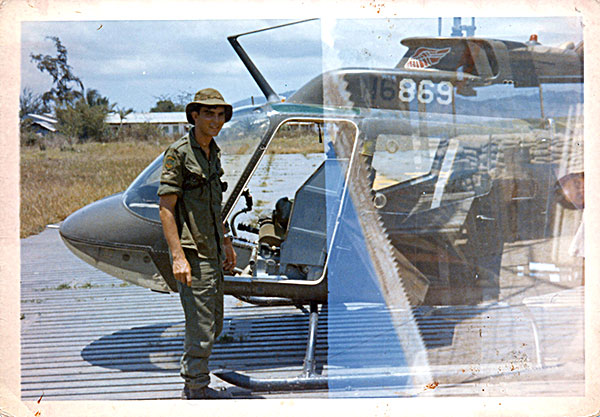 Well that small flight to Lon Song island has always been an exceptional remembered moment in my tour of duty back then, I recall him giving me a cigar on the flight, now that cigar must have been about six feet long at the time, I recall it touching the perspex, well then it appeared six feet long, obviously a little shorter in memory now. I was 21 at that time in Vietnam, now going on 70, but have always remembered the day my Guardian Angel came to my rescue by a chopper. To my chopper guardian pilot I thank you dearly even after all these years, you did save me from a predicament in that moment of need in war. Maybe a pilot out there will recognize the number on the chopper in the picture or recall the incident of flying a lost Aussie to Lon Son island back in 71. To my Chopper Angel I thank you dearly, and will always remember the day my Guardian Angel arrived in a Chopper 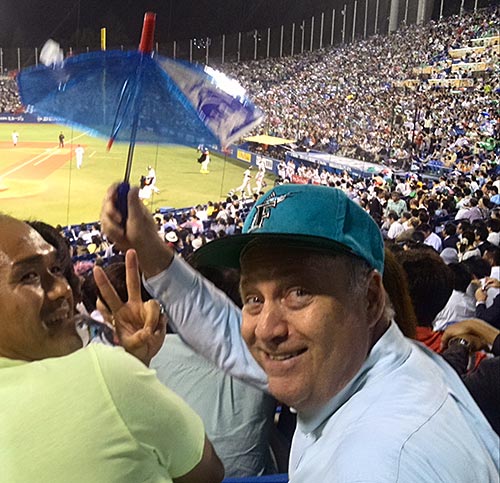 I worked for Pacific Stars and Stripes for over six years, from 2012 through 2018.  As a department manager on the business side, my main responsibility was to be part of the team that broadened the reach of the Stars and Stripes throughout the Pacific area of operations.  The goal was to make someone's time in the Pacific as fulfilling as possible.  We developed many new initiatives, most of which were successful.

Our Editorial team naturally covered military operations around the world. However, some of my favorite stories involved "off-duty" activities, especially where our reporters wanted to hold organizations accountable to equitably support the service members. Some examples include airlines significantly raising the cost to transport pets and online companies who were not shipping to APO/FPO addresses. Our reporting resulted in quick policy changes.

My best memories were engaging with military personnel, their families and civilian employees across Guam, South Korea, Japan and Hawaii. Given the opportunity, I usually asked how long the person had been in their duty station. The longer into their tour, the more value they found in the Stars and Stripes products. This feedback convinced me that the Stars and Stripes organization was fulfilling its mission to support the overseas military community.

Today, I'm retired and volunteer at the USO Lounge at the Orlando Airport. Many guests, including those that served during the Korean and Vietnam wars, have fond memories of Stars and Stripes. That's why we have a daily copy of the paper mailed from Tokyo (except during closures due to COVID-19). 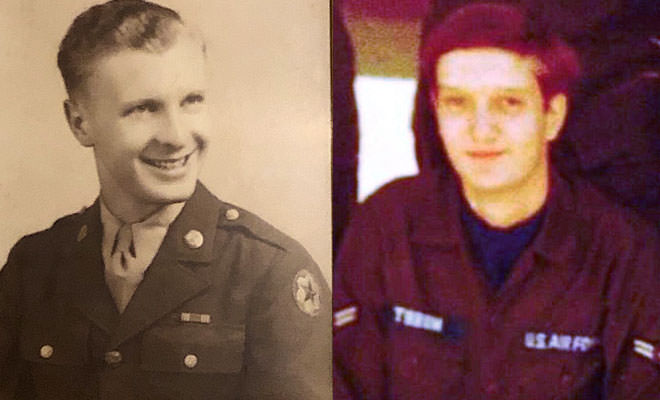 My dad was on Okinawa in WW2. He had many issues of Stars and Stripes he brought back after the war. I would read them in the basement when I was a boy. I still have the issues in storage with my Fathers uniform.

I was stationed at Kadena AB in 1977. Eighteen years old, assigned to the C-130 Black section. The building was on the taxiway next to the fire station. We shared the buidling with the 1st SOS. 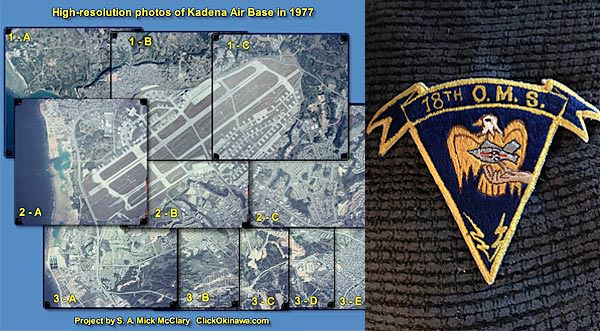 I found a website with high resolution photos from 1977 of Kadena. Brings back warm memories.

That building was haunted, and many troops wouldn't want to be on swings or the graveyard shift. I had many (eerie) experiences.

I was on graves and nothing was happening on the line so I stretched out to nap. I heard talking back in ops and went back and asked of any one was there. No one. I shut off the lights and went back to maintenance and tried to sleep. I had to turn on the radio (because) I kept hearing talking. Went back to the ops counter again. No one. Then heard talking back in maintenance. I was so scared I had to sit at the table with the radio on till day shift came in.

Just one of many stories. We had people who refused to work nights. Scary place.

I now live in North Carolina. Funny, at 62 I train at an Okinawan karate dojo here in Goldsboro. Its sensei is still living in Okinawa. Funny how things circle around. My best to you all, Osu!!!!! 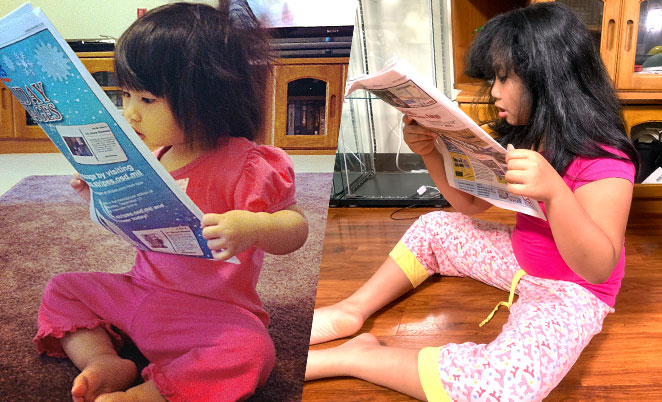 My then 1yr old daughter Reiko Matel (an early reader), reading Stars and Stripes after taking a nap. Today, May 26, 2020 she recreated her picture. She’s now 10 and her works are featured numerous times in Stars and Stripes. She gets exhilarated every time. 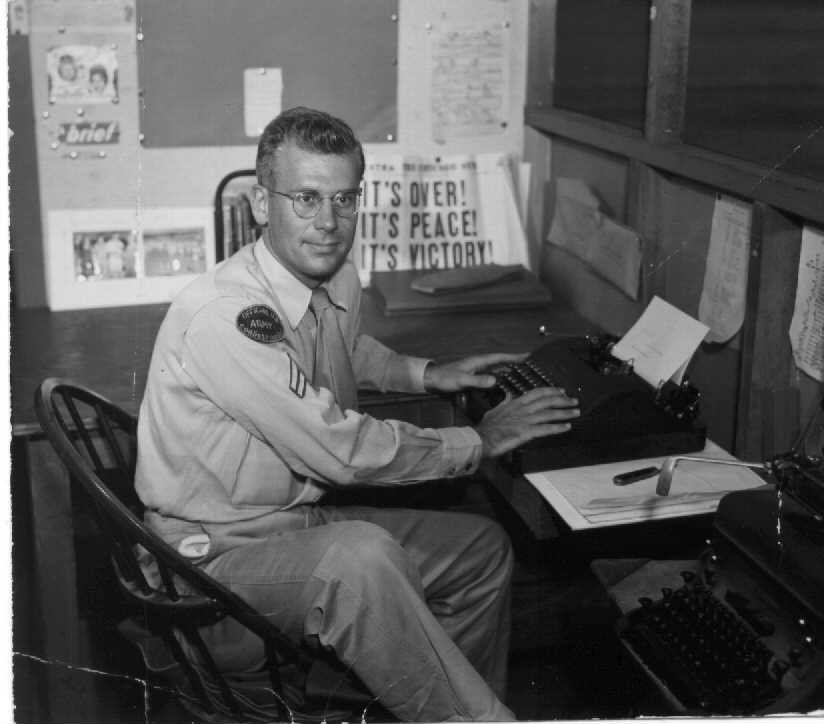 I've attached several shots I've found over the years. Sadly, we lost his collection of S&S columns in a flood. He interviewed celebrities, and combat medal winners. A lot of life lessons from the latter. (Real men cry.) 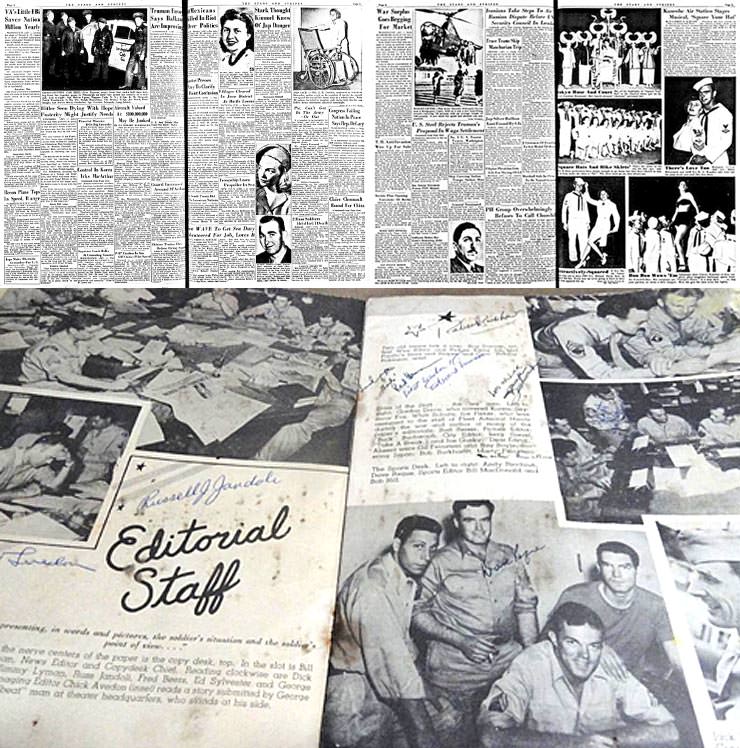 I recall one column on a more humorous note: He explored bringing a surplus Piper Cub plane home with him. (He wanted to be a combat pilot but his eyesight wasn't up to it.)

He was the Dear Editor editor at one point. That was a very delicate position.

There was a story about the entire editorial staff being summoned to Fleet Admiral Nimitz's office for a dressing down over an article about raising the number of points needed to return home after the war. They mistakenly printed a rumor before checking the story. All heck broke loose and Chester wasn't happy. At all. Dad was riveted on those little five star collar pins, thinking he might be fortunate enough to wind up afterwards still breathing in an Aleutian Island igloo...

So, I grew up with a real newsman and editor. I'm thankful for his insights into what real news is and what it takes to report and edit it. Thank you Stars and Stripes. 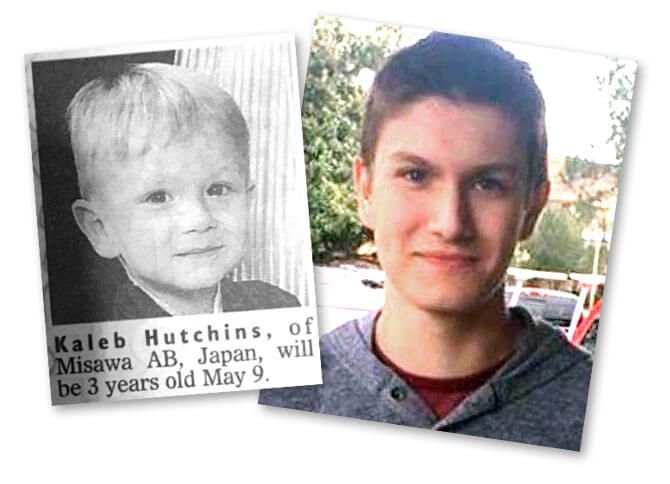 My son Kaleb was in Stars and Stripes many years ago when I was stationed at Misawa AB! He’ll be turning 22 soon! 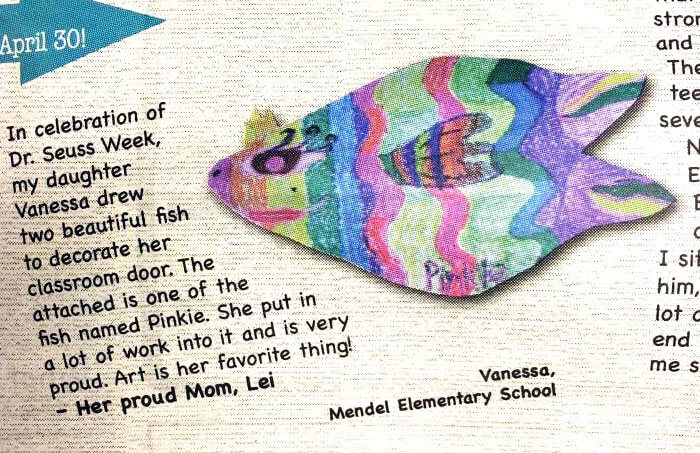 She thought she was famous when her rainbow fish got published in Pacific Stars and Stripes.

My kindergarten aged child waits every afternoon by the door to greet the newspaper delivery man.
He was especially excited to greet him the day he got his new kimono. Our delivery man is so
kind and patient with our kid, taking the time to say hello and listen to a joke or see something our son has made. We love our Stars and Stripes delivery person up in Misawa, Japan.

Congratulations! I first read Stars and Stripes when I was in the United States Air Force and stationed at Cam Ranh Bay Air Base in Vietnam in 1971. I first subscribed at Yokota Air Base in 1978 and am still a subscriber to the printed version.

I spent a lot of time on Diego Garcia after 9/11 and Stars and Stripes was about the only way to stay current. Thank you for all you do to get the news out!

Not a specific memory, but I’ve loved having it be a constant no matter which base in the Pacific we have ended up moving to! From Misawa to Okinawa, it was nice to have Pacific Stripes still be there.

I loved when my little guy’s Month of the Military Child writing and drawing was published last year! Thanks for including our kiddos!