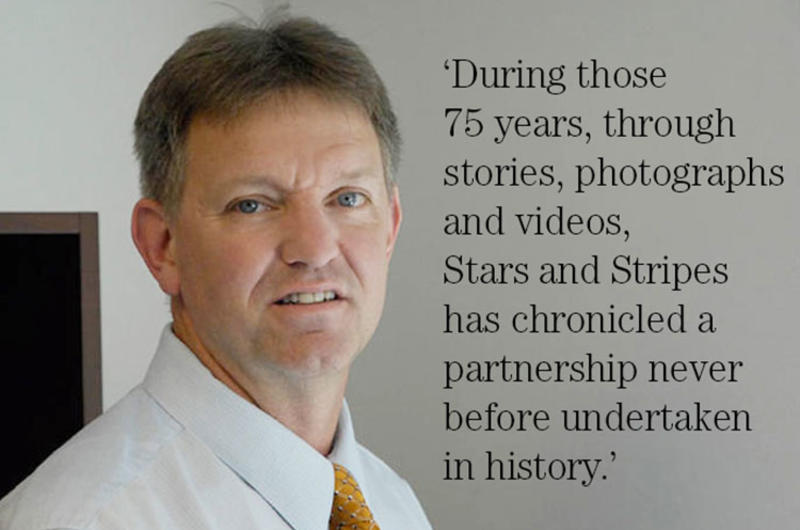 By Max Lederer | Stars and Stripes

When United States forces responded to the attack on Pearl Harbor in 1941 and when the U.S. celebrated V-J day in August 1945, it was not envisioned how the world would change, and that the U.S. and others would be military partners in the Pacific today.

American soldiers, sailors, airmen and Marines — along with civilian employees and their families from the U.S., as well as allies from 36 nations including Japan, South Korea and Australia — have spent 75 years living and working together to support the peace and development of the Indo-Pacific region. That former allies would become enemies, and enemies would become allies and good friends, was unthinkable.

During those 75 years, through stories, photographs and videos, Stars and Stripes has chronicled a partnership never before undertaken in history. The Stars and Stripes’ staff has embraced the mission, with honor and privilege, to record this history.

The good, the bad, the happy, the sad, the shocking and the routine are part of the story. Arguments about the need for the United States in the region, the size of the force, the location and purpose of military stationing matter little to the men and women who commit themselves to live and work in support of U.S. military objectives. The individuals who have stepped forward to be part of the 75-year history have left the comfort of their lives, a decision accepted valiantly by their loved ones, to protect all of us and create an environment of peace and security.

The spirit of sacrifice is part of the DNA of the military community and its families.

Stars and Stripes is commemorating the U.S. participation in the alliance of nations serving to protect and maintain peace in the Indo-Pacific region. The words and the images collected here are intended to illustrate the past and provide context for the future. The Indo-Pacific region bears a special significance for the U.S. and its role as a global power. Relations are centuries old, and the bonds are not only political, military and economic but historical and social.

During World War II millions of American military personnel served in the Pacific area. After the war, there were still important tasks to complete — the rebuilding of Japan, Korea, Philippines and other war-ravaged areas as well as participation in the trials of war criminals.

The rise of communism changed this perspective. The threat of the Soviet Union and Communist China created a need to grow the U.S. military presence. The U.S. presence was essential to support the national strategy of deterring the spread of communism and promoting democracy and the right of self-determination.

The conflict in Korea in the 1950s and the Vietnam War in the 1960s and 1970s tested the resolve of the U.S. military and changed American society in profound ways that are still reverberating. Exercises such as Team Spirit in Korea were part of the fabric of the Cold War and of the education of the children of the United States. U.S. personnel holding the line in the Pacific helped to deter a nuclear attack that children across America prepared for by learning to “duck and cover” under their desks at the sound of a warning.

When the Soviet regime failed, the world exhaled a sigh of relief. But, the growth of China as an economic power and its inception as a massive military force pressured the U.S. political and military influence in the region.

The U.S. was not prepared for the attacks on Sept. 11, 2001, and the resulting conflicts and the hatred directed at the American way of life by Osama bin Laden and others around the world. Once again, the well-trained and skilled forces in the U.S. military were diverted to conflicts in the Middle East. And again, the infrastructure of the Pacific command was essential to the forward-operating activities in the Middle East.

The combat power and logistic capacity of the Pacific command have been integral to sustaining operations and saving lives. The emergence of international terrorism around the world introduced different challenges and required changes to the approach of defending America, its intuitions and way of life. The resulting Pacific pivot placed new focus on the Indo-Pacific region and the U.S. as a world leader.

Always ready for the next challenge, Pacific-based forces deployed in support of humanitarian missions including providing earthquake relief in the Philippines and supporting Japan in responding to the devastating earthquake, tsunami and resulting nuclear disaster.

In parallel to these humanitarian efforts, involvement in the Korean conflict and disputes in the South China Sea, U.S. troop strength in the region declined during the first two decades of this century.

Despite a smaller presence, the need for forward-deployed troops in the Pacific is as essential as it has been at any time. The resurgence of China and the constant threat of North Korea and other points of tension have U.S. military men and women serving at the tip of the spear.

Through all these transitions, Stars and Stripes has chronicled what has occurred: the pain and suffering, the successes and failures, the heroic and the dishonest actions of members of the force. Reporters and photographers have traveled the roads and trails of the military community.

The staff lives with the troops and families as members of their communities. No matter the weather or the conflict, the Stars and Stripes team delivered a newspaper on the “most dangerous paper routes in the world,” including the Korea and Vietnam conflicts, to servicemembers fighting terrorism in various areas of the Pacific, where service personnel risked their lives to save others suffering from a natural disaster in Japan and recently supporting efforts to curb the spread and effects of the global COVID-19 pandemic.

Stars and Stripes recognized the need to assist the U.S. military, which is spread across the vast area of the Pacific, with ways to share their experience and transition into these communities. Stars and Stripes has organized events held with the military community to improve the quality of life — sponsoring runs, commissary food contests, trip giveaways and more.

As a member of the community, Stripes publishes magazines, weekly community newspapers, and community websites focused on stories welcoming the military community member to the Pacific. The community content includes information about local products and culture, delivered on platforms that give a voice to the local, vibrant military communities and provides ways for the military community to share its experiences with each other. Our storytellers have sought to be the voice of everyday servicemembers, to make sense of where they live and work, and to improve the experience of spouses and children, as well as explain their leadership’s messages and make sense of the geopolitical pressures requiring the U.S. presence in the Pacific.

Stars and Stripes has changed just as you, our reader, have changed. Today, how the story is delivered is different — now digital, audio, video and print — but the content goal is the same. To tell the story of the military to the military — a goal no other news organization seeks to accomplish. After our first 75 years, it is still with awe of the sacrifice of the U.S. military community that Stars and Stripes proudly seeks to chronicle your lives.