Duterte wants all foreign troops out of Philippines within 2 years

Duterte wants all foreign troops out of Philippines within 2 years 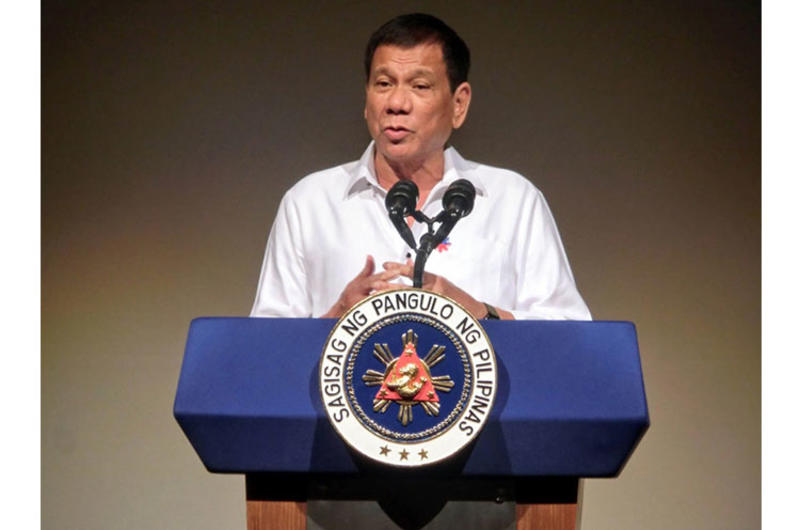 TOKYO — Philippine President Rodrigo Duterte said Wednesday he wants all foreign troops out of his country and may need to “revise or abrogate agreements,” which could include a base-sharing agreement with U.S. troops.

“I want, maybe in the next two years, my country free of presence of foreign military troops,” Duterte said during a visit to Japan. “I want them out.”

It was the latest rejection of the bilateral relationship by Duterte, who has bristled at what he perceives as President Barack Obama still trying to run the Philippines as a colony by interfering in his bloody drug war. He says he is being treated like a “dog barking for crumbs” instead of a true ally.

Under Duterte’s predecessor, the U.S. and the Philippines signed a deal in April allowing U.S. troops to use specific military bases in the Philippines.

It would also deal a severe blow to Obama’s plan to refocus U.S. military and diplomatic assets in East Asia after decades of deepening involvement in the Middle East.

During a speech at the Philippine Economic Forum in Tokyo, Duterte said the U.S. is a “great country” that has helped his nation “in many ways,” but also one that “lived off the fat of my land.” He called for an end to U.S. assistance, even if his people have to pay a price.

“We will survive without the assistance of America — maybe a lesser quality of life — but I said we will survive,” he said. “There is one thing I’d like to prove to America, that there is such a thing as the dignity of the Filipino people.”

Duterte announced a “separation” from the U.S. while in Beijing last week, but later said he would not attempt to end the U.S.-Philippine security alliance, which requires the U.S. to come to his country’s aid in the event of an attack.

Washington values access to Philippine bases for its global anti-terror efforts, and for their proximity to the South China Sea – a key global trading area where China has militarized reefs claimed by several nations.

The U.S. remains popular in public opinion surveys, but so does Duterte, whose election this year came largely on an anti-crime platform.

Thousands of extrajudicial killings have occurred in the Philippines under Duterte’s watch. In a September speech, he said he would be “happy to slaughter” 3 million addicts.

The killings have alarmed the State Department, the European Union and some in the West who have suggested that he may be liable for war crimes in international court.

Some of those killed were victims of a war on drugs, Duterte said Wednesday. However, the West doesn’t fully understand the drug problems of his country, and “supposed friends” shouldn’t publicly criticize him.

“They would say to you, `Stop it because we will suspend aid and assistance to your country,’ ” Duterte said. “You know, it’s like saying, ‘I am a dog on a leash. If you do not stop biting the criminal, we will not throw the bread right under your mouth, we will throw it farther.’

“That is what America wants me to be — a dog barking for the crumbs.”

Duterte has previously belittled U.S. assistance, calling military ships provided by the Navy as “hand-me-downs.” But the Philippines would clearly be worse off if the aid pipeline were halted, particularly in rapid response to the typhoons and other disasters that hit the country with regularity.

The U.S. also sent in counterterrorism trainers, along with high-tech gear, in 2002 after a rash of bombings and kidnappings 2002, and they have been credited with helping crack down on the al-Qaida-linked Abu Sayyaf group.

Duterte began his 20-minute speech thanking Japan for its economic support and making a pitch for further investment in his country. About halfway through, he went off script and told the crowd of about 1,000 business workers and government officials that he would address what interested them most.

Duterte said his China trip last week was only about economics and that military alliances were never mentioned.

However, he told reporters in Beijing that he might go to Russian President Vladimir Putin and tell him that “there are three of us against the world - China, Philippines and Russia. It’s the only way,” according to Reuters.

That comment worried Japanese leaders, who said they would seek to clarify Duterte’s intentions. Japan and China are locked in low-level tensions over a claim to the Japan-administered Senkaku Islands; meanwhile, Japan holds a claim on northern islands Russia occupied near the end of World War II.

Duterte was scheduled to meet with Prime Minister Shinzo Abe on Wednesday night. The Japanese leader is expected to gauge just how far Duterte really wants to move away from the U.S., Japan’s closest security ally.

If Wednesday’s speech is any indication, the answer is pretty far.