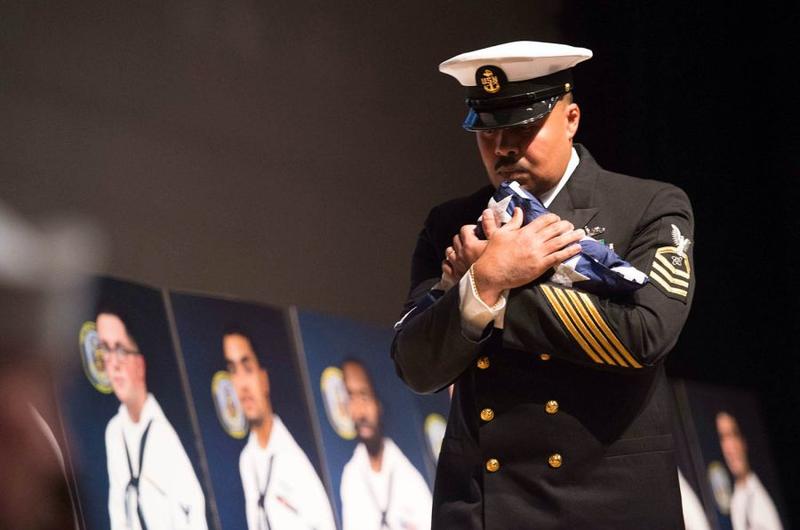 By Dianna Cahn | Stars and Stripes

Families of some of the 17 sailors killed in two U.S. Navy collisions in Asia last summer say the courts-martial beginning this week probably won’t give them closure. What they really want is answers.

How is it possible that two months after the USS Fitzgerald collided with a merchant container ship off the coast of Japan on June 17, 2017, killing seven sailors, another destroyer, the USS John S. McCain, collided with a commercial tanker in the Straits of Singapore, killing 10 more?

Why were the Navy crews allowed to get so tired they couldn’t perform, so undermanned and overtasked that they were working 100-hour weeks and given no time for training? How could the Navy let readiness erode, allowing so many things to go wrong — twice in a row, following at least two nonfatal mishaps in 2017 in the Japan-based 7th Fleet?

“Ten died, five injured, and we are blaming two people?” said Rachel Eckels, referring to those aboard the McCain, where her son, Petty Officer 1st Class Timothy Eckels, died.

Reports have been filed and some punishments doled out. But when the first scheduled court proceeding opens at the Washington Navy Yard on Tuesday, the Navy will publicly begin hashing out what went wrong and who should be held accountable. An unnamed junior officer aboard the Fitzgerald is expected to offer a plea Tuesday. An Article 32 preliminary hearing will be conducted Wednesday to determine whether to proceed with charges against two other unnamed junior officers from the Fitzgerald.

The destroyer’s former commanding officer, Cmdr. Bryce Benson, is slated for an Article 32 hearing May 21. He faces charges that include negligent homicide, hazarding a ship and dereliction of duty.

A date has not been finalized for an Article 32 for the relieved commanding officer of the McCain, Cmdr. Alfredo Sanchez, who is facing similar charges for the Aug. 21, 2017, collision.

In the months since the deadly collisions, the Navy has acknowledged that its forward-deployed 7th Fleet in Japan had been stretched too thin. Reports about the collisions point to mistakes by the crew and commanders, calling the deadly mishaps “avoidable” and caused by human error. The reports showed that errors on both ships were compounded, and opportunities to recognize and avoid grave danger were squandered.

Since then, emerging reports have revealed an exhausted fleet conducting so many operations that training fell through the cracks, ship maintenance was deferred and basic seamanship skills were neglected. A Navy review reiterated what had been ignored in earlier warnings: The fleet was undermanned and overworked; readiness was eroding because of a culture that demanded getting the job done no matter the obstacle.

“I think the main culprit for these collisions was that we allowed the training of our surface warriors to atrophy,” retired Vice Adm. Joseph Aucoin, who was fired as commander of 7th Fleet, wrote in an article last month in the U.S. Naval Institute magazine Proceedings. Aucoin accepted responsibility for his decisions but expressed concern that the Navy might not be learning needed lessons.

“I made clear to the Commander, U.S. Pacific Fleet, of the impact of increased operational demand on training and maintenance” well before the guided-missile destroyers’ collisions, he wrote. “Despite these explicitly stated concerns, the direction we received was to execute the mission.”

Like many of the family members, Eckels knows that holding the ship’s commander accountable won’t bring her son back. Still, she wants to look him in the eye at the proceedings.

“He needs to see the anguish on our faces, the hurt, the pain,” she said.

At the same time, she and other parents say the fix has to be bigger than blaming a few people.

“It is a Navy problem, period,” said Darrold Martin, whose only son, Xavier, was a petty officer aboard the Fitzgerald.

“This whole blame game — come on,” he said. “This is not one seaman’s fault.”

The collisions left Navy families reeling with grief and fuming.

“I would have felt more comfortable if he had been in a car accident,” Martin said. “This should never have happened.”

Martin raised his son as a single parent after a bitter divorce 15 years ago, and the two were inseparable.

As a kid, Xavier often traveled with his father, who called him his roadie. Xavier grew up an honor student and followed his father’s footsteps into the Navy, his father said.

He was bright and responsible, and he was tapped by the ship’s commanding officer to be his personnel administrator on board.

Two months before his death, Xavier Martin showed his dad a tattoo he had inscribed in old English on his inner wrist. It said, “We will figure it out.”

He told his father it was because as a kid, when he came to him with a problem, that was what his dad would say. Darrold Martin laughed. He’d say that because he was busy. But Xavier Martin saw more meaning.

“It meant you had me — I didn’t have to worry about it,” he told his father.

Two weeks before the collision, Darrold Martin got a tattoo on his inner wrist. In old English, it says, “We will figure it out.”

Loved ones have been asked to give impact statements for the court.

Darrold Martin describes one piece of his grief as follows: A parent falls in love with their child and drives home each day with the emotional anticipation of seeing his love. But when he gets there, that love is gone, and he has no forwarding address. He’s been abandoned.

“I am in a glass prison,” he said. “It’s like wearing dirty glasses. Nothing is as crisp as it used to be.”

He used to tell his son to date but not get too serious. “You are young,” he’d say. It struck him recently that he will never be a grandfather.

The USS Fitzgerald was navigating out to sea near Yokosuka Port in Japan when it failed to recognize the dangers of three ships heading across its path in the early hours of June 17, 2017.

They were close enough to present risk of collision, according to a U.S. Navy report. Two of the ships maneuvered to avoid a collision. The third, a merchant container ship called the ACX Crystal, did not.

Commanding officer Cmdr. Bryce Benson was not on deck, and the officer of the deck — the person responsible for navigating — did not recognize the danger until it was too late, the report said.

The collision tore a 13-foot-by-17-foot hole in the side of the Fitzgerald, allowing water to rush into a lower berthing section. Twenty-eight sailors escaped the flooded sleeping quarters. Seven died in the bowels of the ship.

Benson and other sailors aboard suffered traumatic brain injuries. Some who managed to get out nearly drowned.

The USS John S. McCain was navigating entry into Singapore Straits on Aug. 21, 2017, when the commanding officer saw the helmsman having trouble steering the ship while adjusting the throttles for speed control, a U.S. Navy report said.

He ordered the speed control to be shifted to a second sailor, but steering was inadvertently transferred as well, creating confusion.

For three minutes, the crew was not in full control of the ship, which turned into heavy traffic and collided with a tanker.

The collision tore a hole in the McCain 28 feet in diameter, killing 10 sailors in a berthing area.

The Navy reports on the McCain and Fitzgerald crashes cited poor seamanship, noting that the officers on deck did not possess adequate knowledge of their ship systems or the rules of navigating heavy traffic at sea.

The reports also said they failed to maintain situational awareness, failed to communicate with each other when needed and failed to follow Navy procedures for crisis situations.

The collisions finally sparked change — after years of warnings and two nonfatal incidents earlier in 2017 had failed to spur action.

Navy investigations into a ship running aground in Tokyo Bay in January 2017 and a minor collision between another Navy ship and a fishing vessel in the Sea of Japan in May last year led to similar findings of faulty seamanship, bad decision-making and human errors.

A Government Accountability Office report from 2015 laid out the risks of rolling back manning while ramping up demand on the Navy’s forward-deployed fleet. Training, maintenance and certifications were neglected; readiness eroded even as the pace of operations escalated. But those warnings were ignored.

After the collisions, Navy reviews concluded that its “can-do” culture was putting sailors and operations at risk. But how to fix that in a performance-based hierarchy, when officers and commanders are trying to perform admirably, is a difficult question.

In January, the Navy created an oversight council to shepherd implementation of 111 recommendations — mostly improving manning and training, with a focus on seamanship and navigation, improved systems and equipment, and readiness of the force and the fleet. The Navy says 29 have been fully implemented and more than 75 percent of the recommendations are expected to be implemented by the end of September.

But families wonder whether those are enough. They question whether these courts-martial are creating scapegoats to answer for a system that created a forward-deployed Navy that was not ready to be at sea.

“I don’t like to see people punished because the Navy has a problem and is pointing fingers,” said Magali Ginoux, Xavier Martin’s mother. “It’s not a commander’s problem or a shipmate problem.

“The Navy should take responsibility,” she said.

Collision reports on the USS McCain and the USS Fitzgerald both contained identical paragraphs — something that irked some family members —faulting the commanding officer for exercising poor judgment and decision-making.

“That said, no single person bears full responsibility for this incident,” the reports stated. “The crew were unprepared for the situation in which they found themselves through a lack of preparation, ineffective command and control, and deficiencies in training and preparations for navigation.”

Repercussions within the Navy have been severe.

Eighteen sailors faced nonjudicial punishment — 10 on the Fitzgerald and eight on the McCain. That includes the executive officers of both ships and the command master chief of the Fitzgerald, who were found guilty of dereliction in the performance of duties. Each received a letter of punitive reprimand.

Aucoin, who commanded the 7th Fleet, and the two top leaders below him were fired, while the Pacific Fleet commander and the commander of Naval Surface Forces in San Diego retired early — the most senior naval officers to step down in the wake of the tragedies.

So where does accountability lie? Some say it sits on the shoulders of the officers on deck, who made decisions on the ships leading up to the collisions. Others say it lies with the Navy admirals who kept tasking 7th Fleet while shrinking its resources, or the politicians who did not listen as the Chief of Naval Operations stated repeatedly that his sailors were running on empty in the face of budget uncertainty.

The upcoming military proceedings could determine whether either is right or if the answer lies somewhere in between.

Eckels will be there, taking in every word. “It doesn’t matter how hard it is. I will be going gavel to gavel,” she said.

“Someone has to be my son’s advocate. The Navy sure isn’t.”