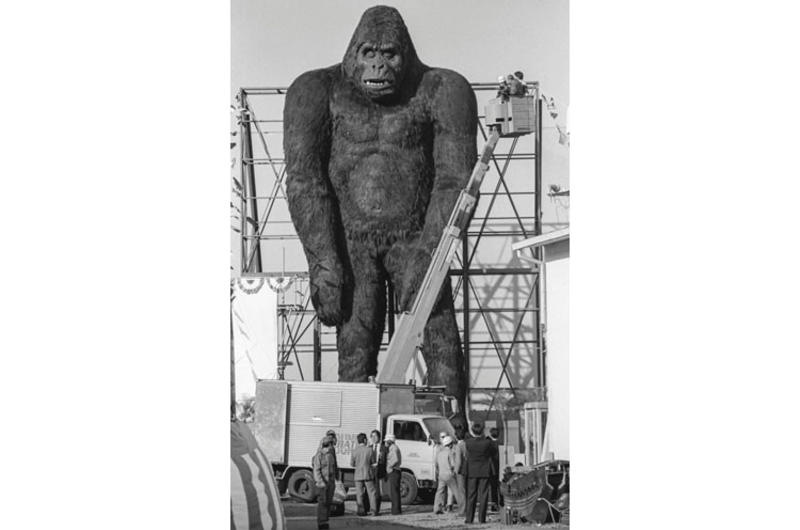 Yokohama, Japan, November, 1986: Visitors to the Shochiku-Fuji Film Studios use a cherrypicker crane to get a close-up view of King Kong. The $700,000, 50-foot monster — built from wood, metal, spandex, fiberglass and synthetic hair — was imported by the studio to hype the upcoming Japanese release of the Dino De Laurentiis movie, "King Kong Lives." Amid negative reviews that swarmed around the film like so many biplanes around a giant ape, the ill-fated remake reportedly brought in less than half of its estimated $10 million production cost at the box office.

By CHARLIE SCHILL | STARS AND STRIPES

YOKOHAMA, Japan — King Kong came to the Tokyo area to prove that the age of schlock movie promotion isn't over in Japan by a long shot.

Officials of Shochiku-Fuji Film Studios imported a 50-foot replica of the familiar movie monster to hype their upcoming release of the Dino De Laurentiis film "King Kong 2." The result was a dog-and-pony show that few Americans would think could happen in these sophisticated '80s.

In the 1950s, it was not unusual to see a brass band, a bevy of high school cheerleaders and a faded matinee idol touring the United States to mark the debut of Hollywood's latest horse opera. But American audiences soon grew tired of such amateurish gimmicks.

Not so in Japan, judging from the nearly 200 journalists and cameramen who flocked to Shochiku's movie lot in Yokohama to see studio publicity agents unveil the towering King Kong model created for the De Laurentiis film.

The show, staged for their benefit, included Kong, three blonde models in bathing suits, two orchestras, a half-dozen cheerleaders chanting "Kong's No. 1," and a squad of extras dressed as U.S. infantrymen to defeat the monster.

SHARING THE spotlight with King Kong was movie set designer John Paterson, who constructed the 50-foot model of the giant ape and operated it during the filming of the picture in the United States.

"Can you believe this?" Paterson asked, gesturing to the 1950-style promotion going on around him. "I haven't seen anything like this in years. We (Paterson and wife Lynn) can hardly keep straight faces."

According to Paterson, Shochiku's only connection with "King Kong 2" is having purchased the right to distribute the film in Japan.

Paterson's replica of King Kong was the centerpiece of Hollywood's third major effort to tell King Kong's story. The first was the original 1933 version by RKO Pictures. That was followed more than 40 years later by De Laurentiis' remake that launched the career of actress Jessica Lange. "King Kong 2" is the Italian filmmaker's second attempt, although the familiar monster has also appeared in nearly a dozen low-budget movies produced in Japan.

Paterson, who comes from England, has been in the set design and construction business for 31 years. His film credits include "Superman III," a 1970s remake of "The Charge of the Light Brigade" and "Murder on the Orient Express."

Paterson admitted that those experiences had not prepared him for his first film design job for De Laurentiis.

"I didn't realize that my job would entail building this beast from scratch," he explained. "But we did it, using metal framework, wood beams, fiber glass, spandex and synthetic hair. He cost $700,000. Then, they told me it had to be light enough for an Army helicopter to carry it over Lookout Mountain (Tenn.). That meant more changes."

THE DESIGNER said the giant figure was only a semi-working model. Kong's entire body would only be assembled for rare wide-angle scenes with co-stars Linda Hamilton and Brian Kerwin. For close-ups, the model's legs or arms might be taken off and mounted on a crane when it was necessary for the beast to stomp a tank or swat a helicopter.

Stripped of the magic of movie lighting and skilled camera work, Paterson's creation looked woefully artificial standing in Shochiku's parking lot, but that didn't stop Tokyo journalists from fighting for the best photographic vantage points around the monster.

Though too young to recall schlock Hollywood promotions, models Linda Batt, Janet Aiello and Natalie Martin seemed uneasily aware that they were taking part in a living anachronism.

Aiello, moonlighting from her civilian job at Misawa AB, Japan, said that she had done a lot of work on the Tokyo modeling circuit. Waving to a sea of photographers while sitting on the foot of a hairy skyscraper, however, was new to her.