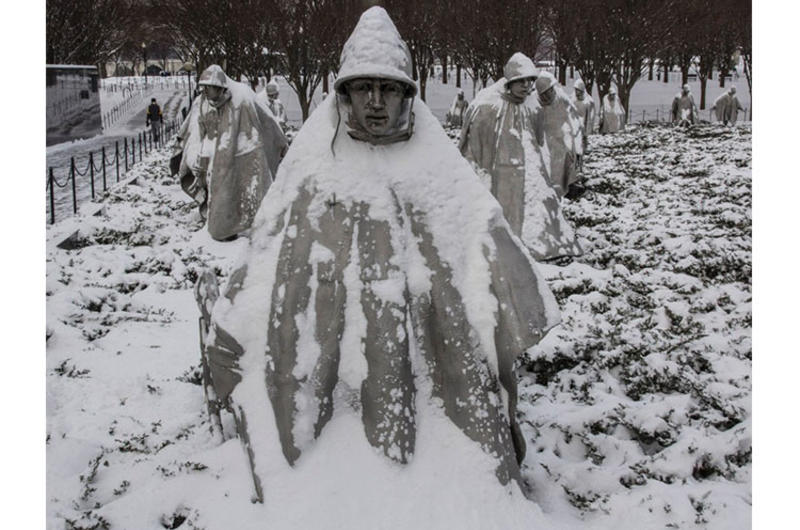 Snow covering the statues at the Korean War Veterans Memorial in Washington, D.C., during a February, 2015 storm serves as a reminder of the hardships endured by troops who fought in the conflict.

Retired Army Col. William Weber, a Chicago native and veteran of World War II, arrived in Korea in 1950 as a company commander with the 187th Airborne Regimental Combat Team soon after the fighting started.

By February 1951 he was headed home after being severely wounded by enemy mortar fire in 12-hour a battle to hold a hilltop position.

Weber, now 94, knew his wounds were grave but believed it was his duty to stay in command and prevent Chinese attackers from taking the hill.

“I had responsibility for my men,” the three-war veteran said. “We were surrounded so evacuation of wounded personnel was not possible.”

The Americans held the hill and by daylight the next morning the Chinese had been defeated, he said.

Weber was one of more than 5 million Americans who served in the Korean War, which lasted from 1950 to 1953. Friday marks the 70th anniversary of the day when the North Korean People’s Army crossed the 38th parallel into South Korea.

More than two million Korean War veterans are still alive today. Here are some of their memories.

‘Dead Americans all around me’

Nighttime bugle calls on Nov. 27, 1950, alerted New Yorker Charlie Rangel and his buddies that the enemy was near.

“We heard Chinese saying we were surrounded,” recalled the former enlisted member of the 2nd Infantry Division and longtime congressman, now 90.

Chinese troops had crossed an icy river and dug into mountains overlooking the troops’ position.

“To this day nobody has explained to me how the entire 8th Army was surrounded by the Chinese,” Rangel said.

“It was horns, bugles and countless Chinese and guns and screaming and yelling,” he said. “There were dead Americans all around me.”

Rangel was shot and blown out of a weapons carrier and found himself under the vehicle as the Chinese overran the position.

But when Rangel came out from under the truck, he found dozens of stunned members of his unit. Rangel climbed over a mountain and made his way back to United Nations lines.

“Forty people followed me, and three days later they were pinning a medal on me in the hospital,” he recalled. He received a Bronze Star with “V” device for valor.

Rangel said he never had a bad day after Nov. 30, 1950, when so many of his comrades died needlessly.

When he came home from the war, he dedicated his life to civil rights and working in Congress as a Democrat from New York.

“When I talk to Koreans who want to honor me, I’m honest enough to say that in 1950 when I was called on a Sunday morning to go to Korea, I had no idea where Korea was,” he said.

“When it was over, I thought the last thing I would want to do was return to that hellhole. Korea was flattened to the ground,” he said.

It took some amazing people to rebuild South Korea through hard work and technology into a powerful democracy and American ally, he said.

“Who knows what could have happened if South Korea had fallen to the Chinese, whether Japan would have been next or the Philippines,” he said.

“You have to pay for democracy, and you have to make certain you keep democracy going, free and democratic, an example for the whole world,” he said.

Charles Garrod, 86, of Delaware, spent 18 months in Korea, from 1952 to 1953 as an enlisted Air Force radio maintainer with the 51st Fighter Interceptor Wing at Suwon.

It was his job to relay forward observers’ warnings of “red air attacks” — using a public address system to tell troops to douse lights and fires and man weapons stations.

“Thirty minutes later Chinese bombers would fly over us and bomb a fake base made up of inflatable aircraft and buildings several miles south,” he said.

Garrod’s last memory of the war is of walking through South Korea’s battered capital.

“I had such a dispirited view because there was almost nothing standing. Seoul was rubble,” he said.

He remembered the Korean people as always struggling, in trouble and living in fear.

“When I came back in 2007 and saw Seoul as it is today, my mind couldn’t get around it. It went from rubble to magnificent,” he said.

He was assigned to the 310th Fighter Bomber Squadron, which was soon flying escorts for prisoners of war returning to the north, he said.

The F-84 Thunderjets flown by the squadron had seen extensive service during the war. They had plenty of battle damage, and South Korea was littered with unexploded ordnance, McLead said.

Almost seven decades later, the former airman is still working in South Korea, as a contractor issuing specialized tools to mechanics at Camp Humphreys. He’s seen so much change over the years.

“The Koreans have really created a nice place to live,” he said. “The Korean War created a situation that needed assistance and America and our allies came forth to do it.”

Weber went on to fight in the Vietnam War during his 38-year Army career. Seven decades later he’s convinced that America did the right thing getting involved in Korea.

A nation must choose how it will address issues elsewhere in the world, whether it will remain aloof or become involved, he said.

“The Korean War was one that as a nation we became involved to prevent the spread of Communism into free areas of the world,” he said. “It wasn’t that the U.S., per se, was threatened by the actions of the Chinese communists and the Russians. We had an obligation to protect the people of South Korea. It was important that the free world took a stand against armed aggression.”

The great tragedy, he said, is that the Korean people, with thousands of years of history, remain divided.

“When I look at it from the standpoint of history, I can conclude that this conflict we were involved in was justified in that the result was a betterment for the world at large and in particular, the people we were defending,” he said.