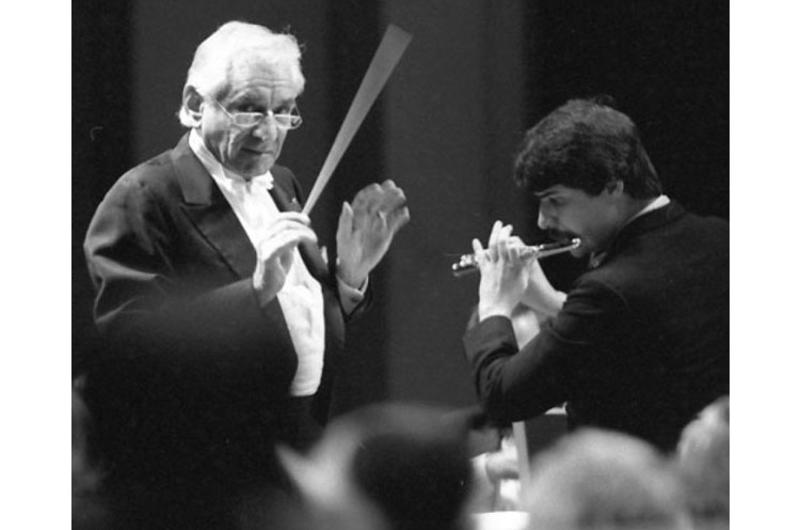 Leonard Bernstein meets the press, then conducts the Israel Philharmonic during a visit to Tokyo in September, 1985.

By P.M. WALSH | STARS AND STRIPES

COMMERCIALISM has crippled the world of rock and pop.

"But no matter how commercial or phony or promoted or hyped pop music may be, it is still music of the people, says conductor and composer Leonard Bernstein. "It's the music of kids. The people who have not yet become cynical, who have not yet given up."

The 67-year-old musician, labeled an artistic polygamist for his accomplishments as pianist, teacher, writer, conductor, composer of symphonies, ballets and musical scores for Broadway and Hollywood, says that we are no longer living the great moment of music.

Now rock music is so much a matter of promotion of words and of ideas for selling that "it's almost not a question of music, but a question of what happens in this factory called the electronic studio," says Bernstein, who earlier this month conducted a series of concerts with the Israel Philharmonic in Tokyo.

Record companies, he says, are writing the music. "They prescribe it and in so doing they almost prohibit or proscribe the writing of the inspired because it has to meet certain conditions, mannerisms and style." There was a time, though, when a few people reigned in a domain of true, spontaneous music, he says.

"It was a period in the late '60s when rock music was very exciting, highly intrinsical," Bernstein says. "It was a time of great Beatle albums and early Stones, the Association, the Left Banke, The Byrds and The Who."

He cites the Beatles as being the greatest of those groups, because, he says, the four managed to maintain a consistent norm of excellence over a long period of time.

"We have to treasure the collaboration of the job involved as we treasure songs of Schubert and violin sonatas of Mozart. Some of those songs are on that level," Bernstein says. Songs such as "She Said," "Norwegian Wood" and "Eleanor Rigby."

Bernstein, who was vaulted into the limelight of Broadway with his score for "West Side Story," likens the condition of music today to Broadway in America.

"It's in a helluva mess at the moment," he says. "It's in a state of retrogression not unlike the rock scene because it's all commercial."

It's not at all about producing a good product, he says. It's about making "megabucks."

The days when one had "the excitement and the will and the daring" to do shows like "Oklahoma" and "South Pacific" and "West Side Story" are gone.

"We took chances," he said. "Nobody takes chances any more."