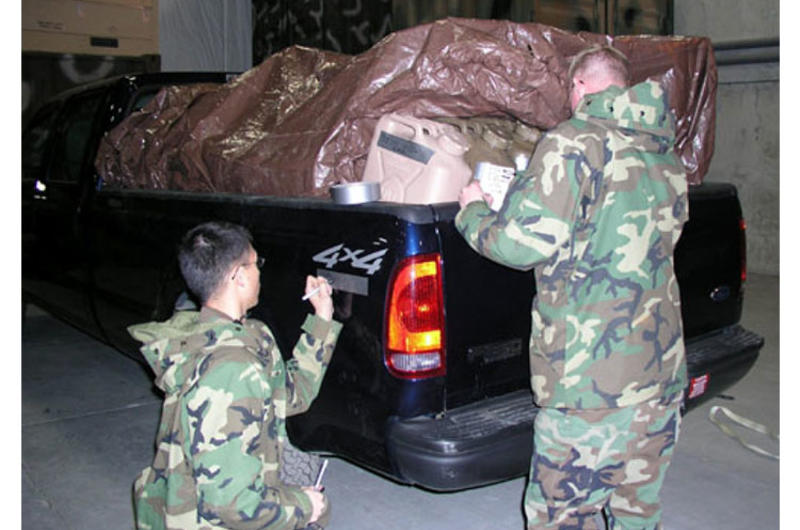 Airmen at Osan Air Base mark their vehicles Wednesday before deployment to South Asia.

By Franklin Fisher | Stars and Stripes

Once there, they’ll report to the combined support force commander overseeing the U.S. military’s role in the massive international relief effort now under way in the region.

They expect their first job to be “airfield assessment” — inspecting damaged airfields and getting them back into service. But they may well be given other engineering tasks in the region, said Capt. John Volcheck, the squadron’s chief engineer and leader of the two-team deployment.

“Basically, our initial tasking is to go down there and assess airfields, but after that we can provide whatever the commander down there wants,” Volcheck said. “We can clear debris, we can build roads.”

The teams also have the equipment and training to purify water.

“And then our team also does bare-base bed down, so if they need any type of tent cities built, we can build them, design them with all of the water and sanitary requirements they need,” Volcheck said.

“We are going to fly into Utapao, Thailand, first,” he said. “And from there they will break us out into our two separate teams. And we will start to evaluate airfields and provide whatever humanitarian assistance, whether that’s a tent city, water production, debris clearing, road building.

“The only … areas right now that we know we’re going to be heading into is, possibly Sri Lanka, some areas in Thailand, and in Indonesia,” Volcheck said.

“But anything other than that I don’t know until we actually get down there and talk to the joint task force commander, what his priorities are.”

The teams will depart Osan Air Base once the Air Force assigns the aircraft that will fly them to Utapao, Volcheck said.

Each team is composed of 12 airmen and four vehicles — one Humvee and three four-door diesel trucks.

Each team will take generators; water purification equipment; an array of engineering tools; 5-gallon cans of water and diesel fuel; boxes of rations in in the form of Meals, Ready to Eat; a tent kit called the Alaskan shelter system; satellite phones and their individual rucksacks, among other items.

The two teams are “advance” parties made up of seasoned Red Horse airmen to whom commanders will look for a crucial first assessment of airfield conditions.

“So we’re kind of the first eyes on the job,” Volcheck said. Once they’ve sized up the airfields, “We’ll send that to the joint task force commander and we’ll send that back to our Red Horse commander. And if additional deployments are needed from Red Horse, they’ll send those … based on our evaluation.”

For the deploying airmen, the mission will mean valuable real-world training and the knowledge that they’re helping people in dire need, team members said.

“The training benefit is enormous,” Volcheck said. “When something like this comes up, there’s so many volunteers to go on these teams, because you’re not only getting to go down and train … you’re also going to help people in a serious way. There’s a higher level of job satisfaction. … You train, and you get to use these skills, and to top it all off, you get to help people who need it desperately.”

“It’s great,” said Laidlaw, 24, of Butler, Pa., a heavy-equipment operator whose engineering skills include drilling water wells. He’s deployed in the past to Oman, United Arab Emirates, and Qatar.

“You don’t get too many opportunities like this in your life, to go help people out,” he said. “Your other deployments, you go out and see your finished product, but you don’t actually get to see how it affects people.

“But here, you’ll be working for all these people who lost their homes. To me, it’s more fulfilling,” Laidlaw said.

“Red Horse is very, very tradition-oriented,” he said. “The entire squadron will get together when a group goes out, and send them off. All the vehicles — the horns are honking. And we do that when units come back.

“When it’s real-world, or even exercise mode, we always do that,” Volcheck said. “And everyone on base knows when we do that because horns are honking and usually we’re waking people up out of bed.”