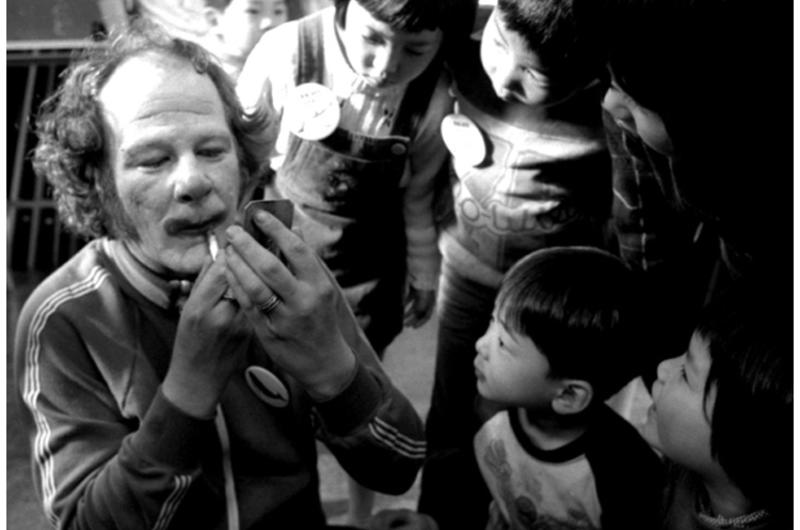 Mitaka, Japan, April, 1977: These children at an orphanage on the outskirts of Tokyo are clearly fascinated by the way a clown puts on his makeup, but this clown has entertained a much larger crowd. He's Hugh Romney, also known as Wavy Gravy, of the Hog Farm Commune in California, and he's remembered for his announcements from the stage at the Woodstock festival in 1969.

San Francisco's famous fool, Wavy Gravy, the man who last year led the "Nobody for President" campaign with slogans like "Nobody loves the poor" and "Nobody will lower your taxes," showed up in Tokyo last weekend to make the scene with more than 100 American musicians and environmentalists who came to join a three-day anti-whaling benefit concert.

Wavy, who calls himself a "psychedelic relic" and says "my chromosomes have amnesia" in response to a question about his age, was one of the leading antiestablishment figures of the 1960s who ran the Hog Farm commune north of San Francisco.

Wavy and the Hog Farm group became known for rock music festivals, carnivals and a variety of zany antics. Some guys never change, but they do grow up.

While in Tokyo, he and singers Richie Havens and Mimi Fariña traveled to Mitaka on the western outskirts of Tokyo to do a special show for children in an orphanage.

But he says he really came to Tokyo to celebrate the whale. "I think laughter and joy are beautiful. With laughter, people are more open to the concept of what's happening to the world's seas."

He told Pacific Stars and Stripes, "I wanted to fix up a bus like a whale — paint it like a whale, have water spouting out the top and broadcast the songs of the humpback whale from. loudspeakers. But the Japanese police objected and wouldn't give us the permits. I think they would have harpooned us," he said.

Instead, he entertained an estimated 15,000 to 19,000 Japanese youths as they came through the lobby to see four shows at the three-day music festival in Tokyo's Harumi Dome.

"The Japanese don't freak out too easily," he said.

That's his opinion. Who wouldn't freak out to Wavy, dressed in a tattered patchwork jumpsuit, faded Beanie hat, tennis shoes and a painted clown's face with a big red plastic nose? He strolled through the crowds strumming a one-stringed instrument he calls an "ictar" which he says was given to him in the Himalayas by a 94-year-old Tibetan man.

Just as he tells you he was married by a Zen Buddhist master and that he likes all religions, a girl he doesn't know materializes in front of him and kisses him right smack dab on the end of his plastic nose.

"Wow, that's the best thing that's happened to me all day," he says, as she disappears back into the crowd ...