1966: Troops and protests increase along with strategy concerns against a determined enemy

1966: Troops and protests increase along with strategy concerns against a determined enemy 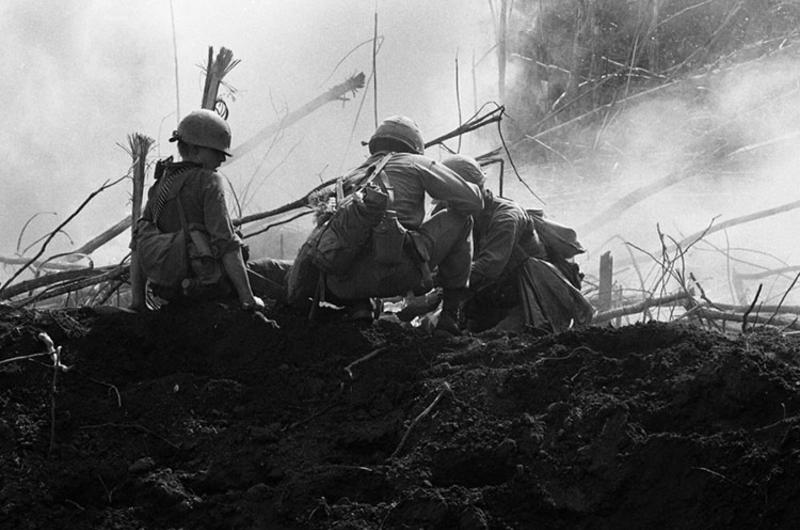 Infantrymen, of the 2nd Battalion, 35th Infantry bandage a wounded soldier after an American-fired mortar round fell short and exploded in the midst of the company.

It was the year of the reality check, when Americans and their own government began to realize just what they faced in Vietnam — a resourceful and tenacious enemy, quarrelsome allies and an Asian society whose complexity they could barely understand.

Back home in 1966, the U.S. administration struggled to sell the war as a noble and necessary sacrifice to stop global communism and save a weak, backward people from an evil aggressor seeking to enslave them.

At first the effort was successful.

The most popular song of 1966 was not one of the many better-known anthems of the anti-war movement.

Instead the year’s big winner was “The Ballad of the Green Berets,” a rousing, patriotic tune written and performed by a Special Forces staff sergeant who had been wounded the year before in the Central Highlands of Vietnam.

By the end of the year, however, a vigorous anti-war movement was emerging on American university campuses. Prominent voices for and against the war were openly questioning President Lyndon B. Johnson’s strategy.

At the start of 1966, the number of American servicemembers in South Vietnam had risen to 184,314 — substantially more Americans than were in Iraq at the peak of the 2007 surge.

They joined about 514,000 South Vietnamese troops facing a combined force of an estimated 280,000 North Vietnamese regulars and Viet Cong guerrillas.

But numbers didn’t tell the full story. Despite their numerical weakness, the North Vietnamese were able to control the tempo -- fighting aggressively where they thought they could win and disappearing into the jungles and across the border with Laos and Cambodia when they decided they could not.

The Communists exploited deep divisions within South Vietnamese society, making it difficult for the U.S. to capitalize its huge military superiority.

On Jan. 8, U.S. and Australian forces launched Operation Crimp targeting a major Viet Cong headquarters and tunnel complex in Binh Duong province about 35 miles northeast of Saigon. The joint force cleared much of the jungle area, also known as the Ho Bo Woods. Soon after the coalition troops left the communist returned, using the area as a major base until 1970.

At the end of January, U.S., South Korean and South Vietnamese troops began the biggest “search and destroy” mission to date against communist forces threatening Highway One, a major north-south supply route in coastal Binh Dinh province about 400 miles north of Saigon.

The operation provided some limited tactical success but failed to achieve major victories because the communists often eluded fights they knew they couldn’t win. The White House ordered the name changed to Operation West Wing because the politicians thought the original — Operation Masher — didn’t send the right “nation-building” signals.

When the communists thought they could win, they didn’t back down from a fight. On March 9, the North Vietnamese stormed a small Special Forces and South Vietnamese camp in the A Shau Valley, overrunning the camp after two days of bitter, often hand-to-hand fighting. U.S. helicopters rescued survivors after the 17-man Special Forces team suffered 100 percent casualties, five dead and 12 wounded.

Meanwhile, an even more serious threat to the war effort boiled over in the north.

The military government that had emerged after a series of coups had been unable to build support among South Vietnam’s majority Buddhist population.

The military’s rival was a Buddhist political movement that opposed escalation of the war, wanted the Americans out of the country and favored negotiations with the communists. Ky considered Buddhist leaders traitors.

On March 10, Ky fired the popular commander of I Corps, which bordered North Vietnam and contained two of South Vietnam’s three biggest cities, claiming he was siding with the Buddhists.

The commander, Gen. Nguyen Chahn Thi, refused to step down, and his dismissal triggered weeks of demonstrations by Thi’s Buddhist supporters at a time when Washington wanted to focus attention on the war.

Nevertheless, support for the Struggle Movement spread and by May, Ky was warning the Americans that the Buddhist militants controlled three northern provinces and were in contact with the Viet Cong.

Ky sent more pro-government troops to Da Nang and eventually crushed the Buddhist resistance there. He also persuaded Thi to accept a U.S. offer for asylum. Twenty-three Americans were wounded in clashes between pro- and anti-government Vietnamese troops before the city was secured.

But protests continued in Hue.

On May 17, a crowd broke into a South Vietnamese division headquarters while a pro-government general was visiting. As a U.S. helicopter rose to take the general away, a South Vietnamese lieutenant fired a pistol at the aircraft and was shot dead by an American door gunner.

After the lieutenant’s funeral nine days later, a mob set fire to a U.S. Information Services library in Hue, forcing the government to send a South Vietnamese division to protect the U.S. consulate there.

By late June, Hue was back under government control, and Lodge praised the government for a “solid political victory.”

With Buddhist resistance crushed, the South Vietnamese and their American allies could refocus on the war.

U.S. and South Korean troops blocked an attempt by North Vietnamese forces to infiltrate from Cambodia. An Australian-led force won a significant tactical victory in a battle in a rubber plantation near Long Tan in August.

Despite suffering heavy casualties, the North Vietnamese showed no sign they were about to quit. In October, Defense Secretary Robert McNamara wrote in a memo that the communists were losing 60,000 fighters a year “yet there is no sign of an impending break in enemy morale and it appears that he can replace his losses by infiltration from North Vietnam and recruitment in South Vietnam.”

“We control little, if any, more of the population,” McNamara wrote. “In the countryside, the enemy almost completely controls the night.”

Johnson faced criticism from all sides. On college campuses, anti-war groups were growing, and McNamara was confronted by a hostile crowd of students during a visit to Harvard.

Heavyweight boxing champion Muhammad Ali refused to accept a draft notice to protest the war. Polls showed support for the war was declining as large protests occurred in Washington, New York and California.

On the other side, former Vice President Richard Nixon called for increasing the number of U.S. troops in South Vietnam to 500,000 and spreading the bombing campaign to Hanoi itself.

Even in the ranks, senior officers began questioning whether Westmoreland’s strategy of large formation “search and destroy” missions, aimed at exhausting the communists through a war of attrition, would work.

“We ended up with no operational plan that had the slightest chance of ending the war,” Gen. William DePuy, former commander of the 1st Infantry Division in Vietnam, said after the war.

Johnson and his international partners offered in October to withdraw all troops within six months if the North Vietnamese left the south. The offer was rejected.

More than half the casualties were due to snipers and small arms fire during communist ambushes, or mines and booby traps along the trails. That reflected the challenge of fighting a stealthy enemy who fought on his terms to avoid falling victim to overwhelming U.S. firepower.

To meet the demands for more troops, the Selective Service System drafted more than 382,000 men in 1966, compared to only 82,000 four years before.

The dramatic increase prompted more Americans to begin questioning the war. The spirit of  “The Ballad of the Green Berets” would give way to a wave of hostility for the war.