36th Airlift Squadron has a history of helping

36th Airlift Squadron has a history of helping 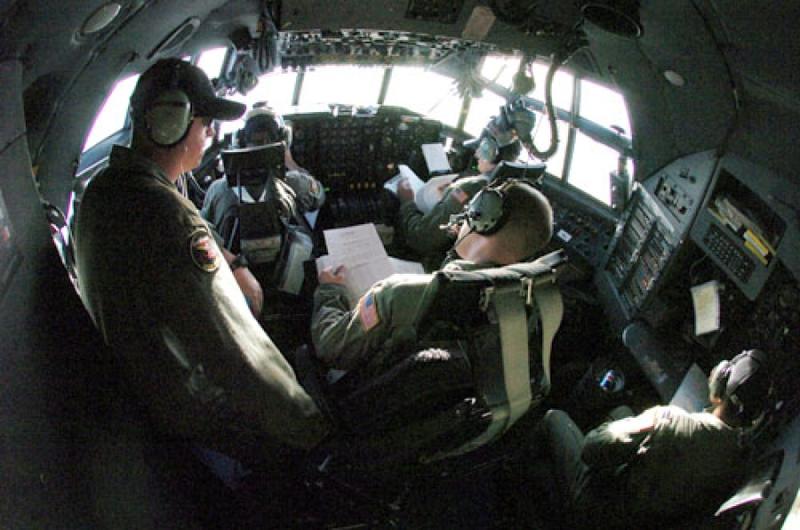 A crew goes over paperwork inside the cockpit of a C-130.

UTAPAO, Thailand — Loaded with boxes of food and medical supplies — one trip included team of Spanish aid workers — a fleet of C-130 Hercules cargo planes is continuing a 40-year tradition of moving medium loads of cargo into hostile, austere or devastated areas.

Pilots fly in support after typhoons, earthquakes and mudslides every year.

“We’re well-suited for it. We have quite a lot of experience doing it,” said Maj. Bill Summers, operations officer for the 36th Airlift Squadron at Yokota Air Base, Japan.

In Indonesia, the planes fly night missions to free up daytime airspace for other countries and nongovernmental organizations flying in relief aid.

The aircraft’s versatility means it can move cargo into difficult locations, like those in some of the hardest-hit areas. Pilots can land on almost anything, in a relatively short distance, day or night.

Crews of C-130s began flying to Thailand two days after the tsunami hit. As soon as they hit the ground, crews began assessing need, delivering supplies and coordinating with local officials for distribution, Gregory said.

“Within 12 hours of arriving we were flying sorties,” he said.

Many pilots are familiar with the region through exercises in Thailand such as Cobra Gold. They’re also very well practiced in humanitarian missions.

The 36th delivered aid to earthquake victims in Niigata, Japan, last year. Last month, the unit continued a decades-old tradition by dropping supplies over remote islands in Micronesia for an annual Christmas drop.

“It’s what our guys are trained for,” Summers said. “Our community particularly sees that quite a bit. There’s a lot of job satisfaction in going off and doing a job like this.”

Young spent New Year’s Eve delivering aid near Phuket, Thailand. His crew did a combat offload — drop the back hatch and drive off, letting the pallets of aid slide off onto the runway.

“We train so much it’s nice to actually do something,” he said, adding that C-130 pilots are fortunate to use their skills for missions such as the tsunami relief.

Many pilots, he said, do real-world operations only in combat.

Young said as soon as he heard about the devastation, he expected to deploy. “We watched it on TV and expected the call.”

Within 24 hours, members of the 36th and the 374th Aircraft Maintenance Squadron from Yokota were packed and ready. Nearly the entire squadron volunteered for the mission, despite it meaning they would miss spending the New Year’s holiday with family, Summers said.

Many maintainers said that in the rush to get ready, they didn’t initially grasp the gravity of the disaster.

“Until this morning I didn’t really know how bad it was, until I saw it all on the news,” said Senior Airman Sean Nappier last week, as he waited to deploy to Thailand.

The mission also is giving some who aren’t part of flight crews a chance to participate and help out.

“I finally feel like I’m doing something useful,” said Staff Sgt. Stefenia Fritz, with the 613th Security Forces from Andersen Air force Base, Guam, who volunteered for security duties aboard a C-130.

“In the military, if you get a chance to do a humanitarian mission, it’s outstanding,” she said.