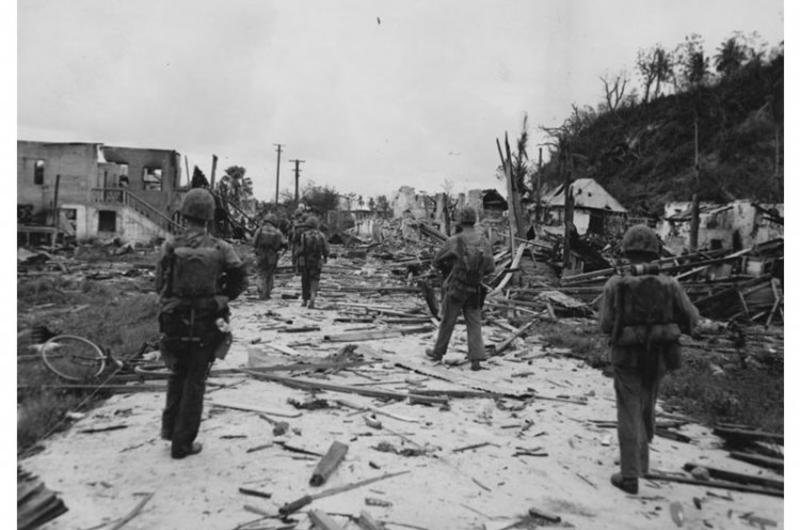 In a lot of Pacific War histories, Guam is swept aside and banished as insignificant.

Masashi Ito and Bunzo Minagawa spent young manhood into middle age in the tropical underside of an island that tourists now praise as a paradise. They were holdouts, soldiers who refused to surrender and would forage for
survival for 16 years.

The last known Japanese survivor, Shoichi Yokoi, held out until 1972, captured by chance as he ventured out to empty a fish trap. Yokoi had never crept out of dense cover to hear the happy shouts of Japanese tourists and honeymooners. Nor had he walked the lobby of the Hilton or the Cliffside.

Luxury hotels swarm over the beachfront and jungle growth has covered the faint traces of war, and Guam gets only a passing nod as a battlefield beside Guadalcanal, Tarawa, Okinawa and Leyte. Thirty-six years ago, shellfire plowed across Guam. Some 18,500 Japanese were trying to pry loose the fingerhold that many more thousands of American soldiers and Marines had fastened on beaches and cliffsides.

Many of the Americans barely had a respite between battles, having first seized Saipan to pull the keystone of the Marianas archway. Guam was almost a point-of-honor afterthought. The island was an American possession until a handful of Marines, soldiers and Guamanian militia made a no-choice surrender only three days after Japanese bombers pounded Hawaii.

The III Amphibious Corps and the 77th Infantry Division are not going in blindfolded that July 21, 1944. Eleven days before the landing, as American warships savage Guam’s coastal defenses, a tall figure sprints down a beach and plunges into the surf, swimming with desperate strength until he is within hailing distance of a destroyer.

George Tweed is pulled aboard and tells an astonishing story. He was one of the 288 men on the island as 5,000 Japanese surged ashore, ignoring the flea-bite firepower of a few .30 cal. machine guns as they overwhelmed the thin garrison and forced the Naval Governor, Capt. George J. McMillin, into quick submission.

Tweed and five others slipped away, hunted by Japanese who probed the underbrush with bayonets. Only Tweed survived, living on land crabs and coconuts, warily evading the patrols that shook every palm tree and banyan for him. Tweed saw his pursuers far more often than they saw him, and his sketchpad mind has taken it all down — every gun emplacement, trenchline and fortified cave. The Japanese failure to capture or kill this ragged stray will cost them dearly.

Exacting naval gunfire singles out visible and concealed coastal guns – all but a few. As the 3rd Marine Division and the 1st Marine Brigade board barges that cut paint-stroke wakes toward the western side of Guam, sharp flashes burst along the coastline. Barges turn over like crumpled buckets.

“You never get it for free,” an older Marine mutters as the barges push ashore — the division between Adelup and Asan Points and the brigade wedging between Point Bangi and the town of Agat. Beachheads are “tightly fastened and the coastal guns erased.

There are already wolfish shouts from the jungle along the coastline. Fierce counterattacks tear into the Marine lines and one lunge rips through the brigade. It is contained after a desperate brawl with bullets, blades and even fists.

The Marines begin moving inland, slowly closing a gap between division and brigade as hey crush across Apra Harbor and Orote Peninsula, squeezing
the defenders between them. But the Japanese put no markdown price tags on anything, heaping fallen defenses with Marine dead. As the two Marine forces grasp .hands, another enemy rush pours forth — the futile bravery of 500 Japanese sailors who die in an inferno of shellfire.

Capt. Louis H. Wilson Jr. is a company commander in the 2nd Battalion, 9th Marines. He thrusts ahead of the others to take high and important ground, holding it against human-avalanche counterattacks.

His Medal of Honor citation will stiffly relate that Wilson “contributed essentially” to the success of the assault, passing over the fact that he was wounded three times and fought aside agonized delirium to rally his Marines.

Soldiers of the 77th, fed slowly into the advance, must do the deadly, mop-and-dustpan work in southern Guam as the Marine advance lunges on. The suicidally determined Japanese will tear tiny leaks and large gaps in the line, and the effort to repulse them will often get down to hand-to-hand piecework.

The advance will spider all over the island, with Guam declared secure as Marines reach the northernmost tip on Ritidian Point. Everything is back under American colors by Aug. 10.

The past will be wiped away over the years. Wreckage will be swept aside. Foundations for posh hotels will be sunk along the beachfront. Andersen AFB and Agana NAS will assure a stronger military presence than those unfortunate few of late 1941.

Strangers will be strafed by stiff expense but nothing else.

But Wilson, Tweed, many Americans and a few Japanese, will always share a thin fund of private memories.

Yokoi returns to Japan - Tears and Cheers for an Old Soldier

TOKYO—Shoichi Yokoi, the former Japanese Imperial Army sergeant who hid out in the jungles of Guam for 28 years, jetted home Wednesday and received a hero’s welcome—a welcome that outshone Emperor Hirohito’s return from his world tour.

About 5,000 people crowded the observation decks at Tokyo International Airport Wednesday afternoon as the Japan Air Lines charter plane touched down bearing Yokoi and the remains of two other Japanese soldiers, Mikio Shichi and Satoru Nakahata.

The two soldiers had sp ent some time with Yokoi in the jungles of Guam before they died about eight years ago.

Yokoi, 56, was placed in the first class compartment of the special JAL flight from Guam, where he was captured Jan. 24 after spending half his life hiding from “the enemy,” never wanting to surrender because it would have been a disgrace to do so.

He was attended by Dr. Yoshiuki Koyama of Tokyo’s Daiichi Hospital, a nurse from Tokyo, and Kazushige Nakamura, director of the Repatriation Bureau.

First on board the aircraft after the doors opened in Tokyo were customs and immigration officials. Following them, 10 doctors filed through the doors to examine Yokoi.

Next on board were three officials to claim the remains of Yokoi’s two companions. They came back out almost immediately bearing white boxes con-
taining the remains. They passed by bereaved relatives who wept openly and bowed low in grief.

About 15 minutes after the plane had parked it was time for Yokoi to emerge. He was visibly touched by the response as he stepped onto the stair-ramp. He had to be steadied by his doctor and nurse.

The crowd waved Japanese flags and chanted “Banzai! Banzai!” Yokoi waved back as tears streaked down his face.

At the bottom of the steps he set foot on Japanese soil for the first time in 31 years. He was first greeted by Japan’s Health and Welfare Minister Noboru
Saito. The two chatted for a few minutes, Yokoi now standing on his own but not letting go of the minister’s hand.

After the exchange of greetings the two turned towards the assembled press for pictures. Again Yokoi waved and this time he shouted “Banzai!” The crowd cheered louder.

Two airport ground crewmen, who were also working the day the Emperor returned from his overseas tour, said the crowd was bigger and more boisterous on Wednesday than the day of the emperor’s return.

Yokoi was placed in a wheelchair for the short trip from planeside to a waiting car. As he was pushed to the car he again received a loud ovation. The car took him to the airport hotel for a brief press conference.

During the conference Yokoi was asked his first impressions of Japan. “When I saw my motherland Nippon I could not help but cry. I am too full of emotions to express my happiness to be back in Japan,” he said.

Yokoi also gave his reason why his country lost the war: “Japan lost the  pacific war because it lacked arms, warships and planes and not because of any lack of fighting spirit.”

He also repeated his desire to meet the emperor. Thoughts of Emperor Hirohito helped him to continue during his lonely years in the jungle, he told the press.

He also mentioned one of the possessions he brought back from Guam. “I brought back the rifle entrusted to me by the honorable emperor which I want to return. I want to report that I am sorry I did not serve his majesty to my satisfaction.”

He said, as he did in Guam shortly after his capture, that he was glad he was going to Japan, but apologized for not dying for his country.

Following the conference Yokoi was whisked away to the Tokyo Daiichi Hospital where he will undergo more medical checkups. A team of specialists will be assigned to him full time.

Yokoi seems to know what he wants to do as soon as he is able. He wants to write his memoirs.