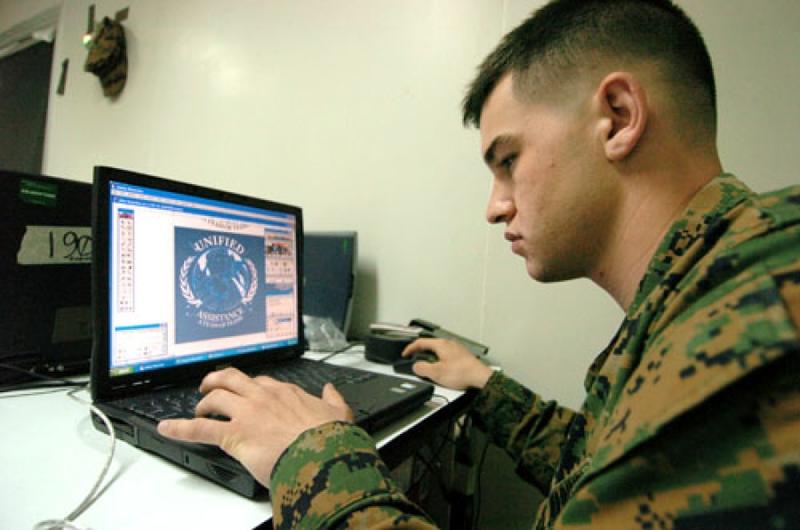 UTAPAO, Thailand — For years to come, every time the logo for the U.S. military’s post-tsunami relief work is flashed on a screen, Lance Cpl. Michael DeVoe Jr. can remember his role in the effort.

When it’s completed, the image will appear in the background of every news conference and on the letterhead of every document about the massive historic mission.

“I’m excited for him,” said his boss, Chief Warrant Officer Timothy LeMaster, officer in charge of the 3rd Marine Division Combat Camera in Okinawa. “The operation is going to go down in history and he gets to put an image to it.”

DeVoe, a 20-year-old Marine Corps combat graphic illustrator, is designing the official logo for Operation Unified Assistance, the military-led relief effort in Thailand, Indonesia, Sri Lanka and other areas affected by the Dec. 26 earthquake and tsunami.

DeVoe arrived in Thailand expecting to have not much to do. He started designing a logo on his own initiative.

He and LeMaster were pleased enough with his design, an image of a globe showing the region with flags from several countries, that they brought it to the command staff.

Blackman also gave him a new theme for the multinational mission: a team of teams, representing the various nations and nongovernmental organizations working together.

The final design has yet to be approved, but the current draft (shown below) retains the globe and includes symbols denoting peace and cooperation.

The design must keep cultural sensitivities in mind: A red cross on a box was removed when they realized it looked like a bible when printed in black and white.

“That’s been the hardest part for him, trying to get a concept like that and make it work in an image,” LeMaster said.

But just as he began designing the logo, DeVoe was faced with another important task.

“Initially they were mobbing the helos,” Lwin said.

He told DeVoe what he needed: a leaflet to convey, simply, the dangers of helicopters, telling people to wait for aid to be brought to them. DeVoe created a simple, clear design.

“It’s been effective,” Lwin said. After Indonesian soldiers began handing out the papers to crowds “they immediately moved back.”

They next created a sheet that air crew members could use to ask crowds if anyone was injured and needed evacuation. The design shows a stretcher being carried to a helicopter and then on to a hospital. It asks where the injured people are and offers three responses to which Indonesians can simply point, avoiding any language-difference barriers.

On a recent mission, aircrews evacuated 32 people as a result of using the paper. “His work is directly saving lives on a daily basis,” Lwin said.

DeVoe is just recognizing that significance, he said, and that something he loves to do can help.

DeVoe said art came naturally to him in high school. He graduated at the top of his art class and planned to continue his studies in college. But costs put that dream on hold. A recruiter at school turned him on to the unique military specialty of combat graphic illustrator.

“This is exactly what I wanted to do. Nobody can tell me otherwise: I’ve got the best job,” he said. “I can pay for college this way.”

“Within four months I started seeing my jobs all over the base,” he said.

The logos were more than just designs, he realized. They were symbols of unit pride.

Now on his first deployment, DeVoe also is carrying on the combat illustrator tradition of going into the field to document missions.

Illustrators, LeMaster said, can show events other media can’t in cases when security is high, for example, and show meaning through drawings that a split-second camera image can’t convey.

“There’s things illustrators can capture that other forms can’t,” LeMaster said. “People don’t realize what these skills can bring to the table.”

The magnitude of his work is starting to sink in, DeVoe admits: “I’ll definitely have to write home about this.”