Philippines encouraged by talks with US admiral over dispute with China

Philippines encouraged by talks with US admiral over dispute with China 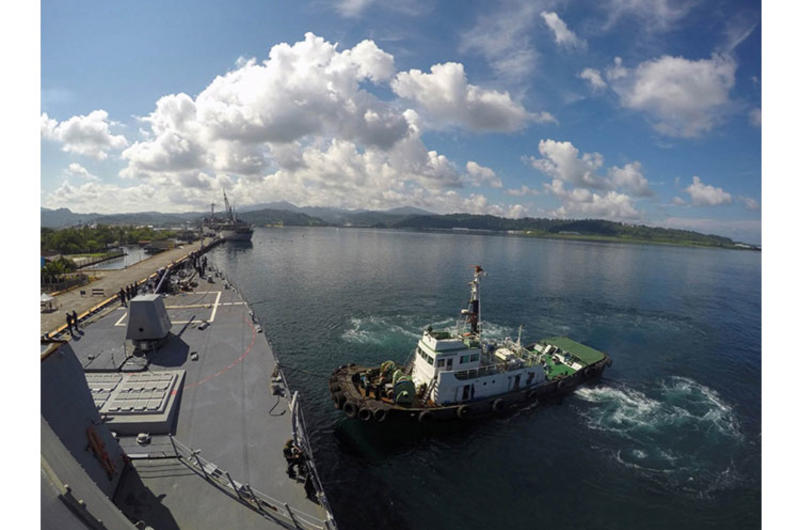 COURTESY OF THE U.S. NAVY

YOKOSUKA NAVAL BASE, Japan — The United States reassured the Philippines it will patrol areas of the South China Sea disputed by Manila and Beijing, Philippine officials said after a visit from the head of U.S. Pacific Command.

Philippine Defense Secretary Voltaire Gazmin said Wednesday that he asked Adm. Harry Harris to fly patrol planes over island territory claimed by China but garrisoned by Philippine troops, according to The Associated Press.

Chinese vessels in recent years have attempted to block the resupply of Second Thomas Shoal, a small island within the Philippines’ exclusive economic zone. The island is garrisoned by a handful of Philippine servicemembers aboard a rusting, former U.S. WWII-era ship grounded on the shoal.

“If there are Americans flying around there, we won’t be troubled,” Gazmin told the AP. “We need to be helped in our resupply missions. The best way they could assist is through their presence.”

Harris did not speak publicly after his Wednesday visit, according to media reports. However, he has criticized China’s methods of asserting its ambiguous claims to nearly 90 percent of the South China Sea, where the Philippines and several other countries have competing claims.

In July, Harris called out China for “essentially creating false sovereignty” and for destroying fragile reefs by building artificial islands on top of them in the disputed Spratly Islands.

The U.S. contends the South China Sea’s water and airspace are part of the global commons under international law, and therefore open to military transit and surveillance. China rejects that interpretation and maintains that its island claims are “indisputable,” despite claims on seas and territory by the Philippines, Vietnam, Brunei, Malaysia, Indonesia and Taiwan.

An estimated $5.2 trillion in global annual trade passes through the South China Sea, making security in the region a global affair. It is part of the reason the U.S. announced in recent years a military, diplomatic and economic emphasis on the Asia-Pacific known as the “pivot” and the “rebalance.”

Despite those plans, Asian leaders have expressed concerns that the U.S. strategy won’t materialize, considering pressing concerns in the Middle East and other parts of the world. However, Philippine officials said Wednesday that the U.S. plans to increase exercises and patrols in the region. That would be in keeping with U.S. plans to station 60 percent of its surface fleet in the Pacific by 2020. The Navy already stations 60 percent of its submarine fleet in the region.

An increase in activity won’t turn back the clock on China’s island building, but it could allay some concerns about the U.S. commitment, said Richard Bitzinger, senior fellow for the Military Transformations Program at S. Rajaratnam School of International Studies in Singapore.

“I don’t know if it will change Chinese behavior, but it’s certainly sending a message to the Chinese that the U.S. is serious about the pivot,” he said.

Although the U.S., Canada and Australia helped Manila recently acquire ships and combat helicopters, the Philippines is no match for China militarily. Only the U.S. spends more on defense than China, and the Philippines’ flagship is a retired U.S. Coast Guard cutter.

The U.S. also wants to help Manila through the 2016 defense authorization bill. That includes the South China Sea Initiative, which would release $225 million through 2020 to the Philippines and up to seven other Southeast Asian nations for maritime security and training.

In the meantime, the Philippines’ weak military helps it garner international sympathy.

“They look like the scrappy little underdog who’s doing whatever they can,” Bitzinger said.

The Philippines’ efforts include a case before the International Tribunal for the Law of the Sea over China’s ambiguous claims to the South China Sea.

China has rejected participation in the case, even though it is a Law of the Sea signatory and theoretically bound by the court’s decision.

Philippine officials said Harris on Wednesday outlined several points from a copy of the Pentagon’s new Asia Pacific Maritime Security Strategy — a document that takes no position on territorial sovereignty, but backs the Philippines’ right to take on China in court.

“In the South China Sea, we urge all parties to pursue peaceful means of resolving their disputes … such as the Philippines’ submission of its claims for arbitration,” the document says.