The poignant process of etching new names into the Vietnam Wall

The poignant process of etching new names into the Vietnam Wall 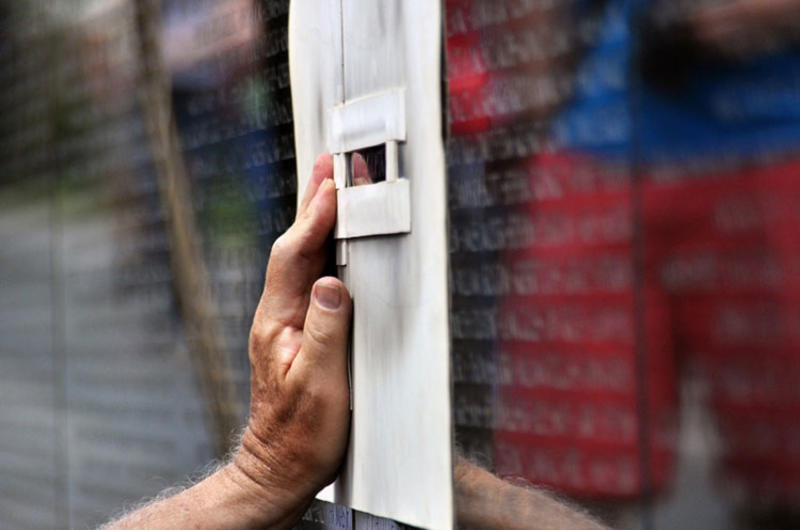 Preparing to cut another name into the black granite of the Vietnam Veterans Memorial Wall, engraver Jim Lee carefully positions a stencil and a sandblasting platform at a designated spot on the Washington, D.C., memorial on Friday, May 2, 2014.

Photo by Carlos Bongioanni / Stars and Stripes | BUY THIS PHOTO

WASHINGTON — Lined row upon row, the names etched on the Vietnam Veterans Memorial’s polished black granite slabs are a somber reminder that more than 58,000 U.S. troops died — or were listed as missing-in-action — as a result of their involvement in the Vietnam War.

Even though the war ended four decades ago, the list continues to grow as Jim Lee and Kirk Bockman find spots to carefully sandblast new names on the memorial.

“It’s a very poignant statement about what war is all about,” Lee said of the wall last week, as the engraver and his business partner prepped a cordoned-off section of what’s known as “the Wall.”

On Sunday, the Vietnam Veterans Memorial Fund will host a ceremony at the memorial in recognition of the 13 veterans whose names they added. Eight veterans listed on the wall as missing will be recognized as having their status changed to “confirmed dead.”

Lee and Bockman came to the memorial in 1986 to add 110 names. The names on the original, dedicated in 1982, came from a Department of Defense master list that planners never intended to update, Lee said. Thinking the follow-up work might be “a one-time deal,” Lee said he asked Jan Scruggs, founder and president of the Vietnam Veterans Memorial Fund, how long the updating might go on.

Even after doing this for 28 years, Lee remembers stories behind some of the names. He recalled one Vietnam veteran who spent 16 years in a coma at a VA hospital before he passed away. Another veteran — whom Lee said had visited the memorial — died after shrapnel lodged inside him from his days in Vietnam broke loose and severed his aorta.

Adding the names is a delicate process.

Precise measurements must be made to ensure letters are lined up, have the right width and are etched into the granite to a depth that matches the etchings already on the monument. If the inscription is too shallow, the new name will stand out. If it’s cut too deeply, the name will lie in shadows.

The letters are burned into the wall as a dust-free sandblasting apparatus is passed over a stencil mounted an adhesive. Aluminum oxide particles shot at high pressure cut into the granite under the stencil. The area around the letters has a rubber material that deflects the particles so the granite beneath the rubber does not get burned. At the same time the rock is being cut, a vacuum system sucks up the debris.

Ensuring that the adhesive holds the stencil in place is critical, Lee said. If the wall gets too hot, it could dry out and weaken the adhesive, causing stencil failure. Coupled with the strong suction of the vacuum system, a weakened adhesive could let the stencil lift up, allowing particles to mar the wall.

“That’s the most terrible thing that could happen,” Lee said, adding that even the slightest error with the sandblaster will cause exposed granite to turn white. “And so, if you have the center of the ‘O’ come off because the wall was too hot, then you have a great big white blob in the middle of a letter.”

At that point, Lee said, “you’ve done damage to the wall.”

Not wanting their company, Engrave Write in Denver, to be the one that “ruins a national memorial,” Lee and Bockman approach their job with the utmost care.

“This is not like most sandblasting. There are people immediately around you,” said Lee who recalled mothers, fathers, brothers and sisters watching him burn the name of their loved one on the wall. “It’s almost performance sandblasting, if you want to call it that.”

Lee said when he first began engraving names on the wall, he didn’t anticipate how important the memorial would become to him.