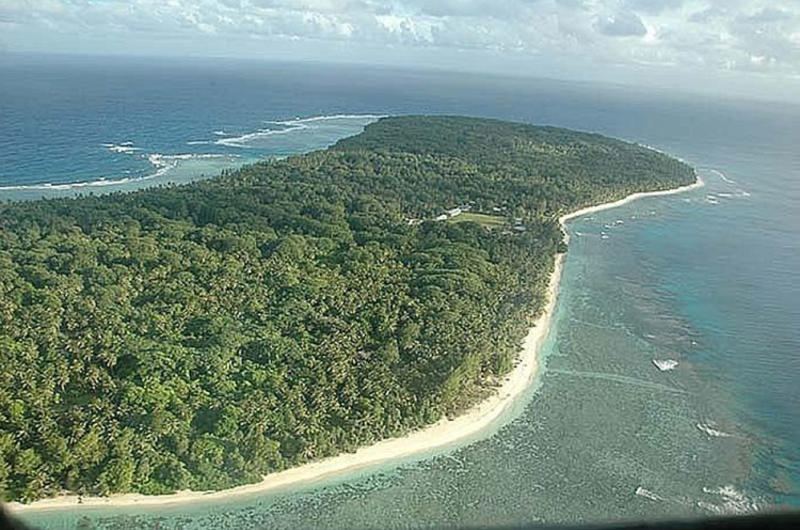 The Micronesian island of Ulul as seen from a C-130 on Tuesday, Dec. 11, 2012. The island was first on the list for Operation Christmas Drop due to a food shortage, however, its bundle exploded on impact after being dropped from the C-130 because of parachute problems.

By Charlie Reed | Stars and Stripes

ANDERSEN AIR FORCE BASE, Guam — Playing Santa in a C-130 is tricky.

The sleigh can break down.

And the presents, if not delivered just right, either go to the sharks or go splat right in front of their intended recipients.

Those are the pitfalls that Air Force elves face during Operation Christmas Drop, an eight-day humanitarian mission over Micronesia and Palau. Crews with the 36th Airlift Squadron from Yokota Air Base in Japan deliver food, medicine, other essential supplies and a few toys from the back of the venerable cargo plane by parachute.

“Santa’s got his problems, and we’ve got ours,” said Col. David Gould, commander of the 374th Operations Group at Yokota, who piloted the first Christmas Drop sortie out of Andersen Air Force Base on Tuesday. The drop encountered more than its fair share of glitches.

Just as the crew was preparing to take off with a cabin full of reporters and the U.S. ambassador to Micronesia, the nearly 40-year-old C-130 broke down. The same mechanical hiccup had kept the crew at Yokota an extra day en route to Guam.

So they changed planes, unloaded and reloaded the boxes, and took off for Ulul, a speck of an island in the Pacific that was first on the list because of a recent food shortage at the local school, where about 250 students from even more remote islands attend class part of the year.

They nailed their target — a narrow patch of dirt marked by a tattered, red flag that stood out in the lush, dense coconut palms that cover most of the tiny atoll, about 150 miles northwest of Chuuk in Micronesia. It’s home to about 650 people during the school year.

But the parachute failed. The 600-pound box essentially disintegrated on impact, leaving the weary villagers with only a small crater.

The hulking plane circled the island a few more times so the crew could assess the snafu, but Gould quickly called off the rest of the mission, fearing the same parachute problems would afflict the two other drops on their list that day.

“Do we keep going when this happens? No,” he said later. “We reassess and figure out what went wrong.”

Hours later back at Andersen, the crew figured out that the bundle apparently was too heavy for the parachute.

The parachutes used for Christmas Drops are plucked from the military’s “condemned” stockpile, which likely accounted for the rigging problem, Gould said.

Although the Defense Department considers the 61-year-old Operation Christmas Drop its longest-running humanitarian mission, the military contributes only the planes, fuel and aircrews. The rest comes from donations, mostly collected on Guam.

The military’s participation is tied to the training it provides the C-130 crews. The drops not only require low-altitude flying but precision timing. Airlift crews typically have 10-30 seconds for most missions. The Christmas Drop mission gives them one to two seconds to execute the push.

It’s the Super Bowl of crew resource management as the pilots and navigators literally eye the target once they get close while coordinating with the loadmasters at the back of the plane.

Loadmasters typically pull a lever to release cargo. But during intense missions like Operation Christmas Drop, where 100 feet can mean the difference between success and failure, they must strap themselves into a harness attached to the inside of the plane and physically push out the bundles.

“The skill sets we’re using in this humanitarian mission are exactly what we’re doing in Afghanistan,” Gould said. “This is actually wonderful training for us.”

The Operation Christmas Drop Organization raises the funds and collects the supplies — everything from fishing tackle and coolers to canned food and basic medical supplies.

This year, the group collected 37,000 pounds of goods, enough for about 55 islands.

“It’s amazing to watch everything come together,” said Air Force Capt. Mitchell Foy, president of the Christmas Drop Organization, which is not affiliated with the military. “The one thing you want to do is put everything you can into it.”

Manny Hechanova agrees. He’s the remote islanders’ only link to the outside world.

As the acting associate director of the Telecommunications and Distance Education Operation at the University of Guam, Hechanova communicates daily with most of the outlying islands of Micronesia and Palau, providing weather and news reports as well as relaying emergency messages and medical information on solar-powered radio equipment.

“The spirit of helping is infectious,” Hechanova said.

So infectious that after the first failed drop, volunteers were able to collect another 600 pounds of goods for Ulul which were scheduled to be dropped Saturday afternoon.

“It’s Christmas, and people don’t forget that,” Hechanova told Stars and Stripes on Friday. “Everybody rolls up their sleeves, drinks another cup of coffee and says ‘Let’s get this done.’ ”

All of the drops since Tuesday’s initial failure have been successful, Hechanova said. That’s making all of the surrogate Santas happy.

“It’s been a good Christmas.”