Fan of Korea veterans maps memorials for the forgotten war

Fan of Korea veterans maps memorials for the forgotten war 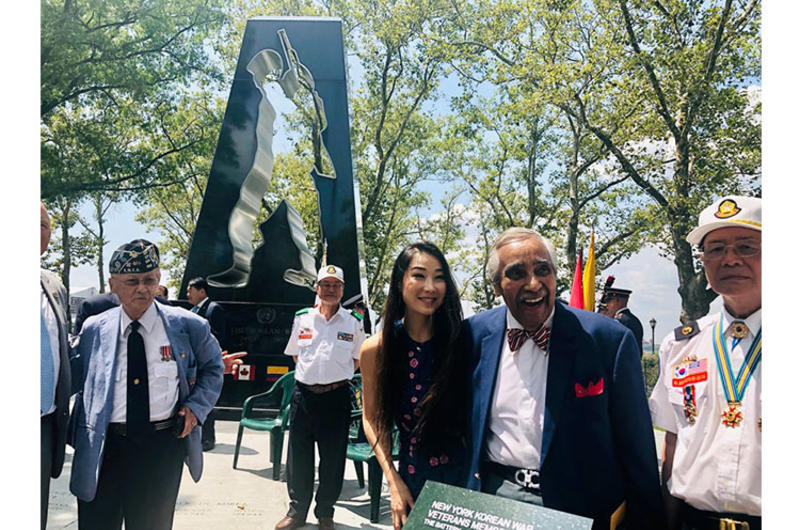 Hannah Kim has met 1,200 Korean War heroes and visited memorials in all 50 states as well as those in U.S. territories and foreign countries that participated in the conflict.

“Many people ask me how I ended up being almost obsessed with Korean War veterans,” Kim, 37, of Washington, D.C., said in a recent telephone interview.

As the daughter of South Korean immigrants, her interest was sparked by a visit to the Korean War Veterans Memorial in Washington as a 22-year-old college student in 2007.

“It’s extremely humbling,” she said of her trip to the memorial, which features 19 sculptures of troops from all four service branches standing, as if on patrol through a Korean rice paddy.

“For some reason it really struck me,” Kim said. “That’s where I fell in love with these veterans.”

Kim felt embarrassed that she knew almost nothing about the war at the time, she said.

In 2008, she campaigned to make July 27 National Korean War Veterans Armistice Day, which was established by President Barack Obama in 2009.

“The reason why I’m free and why South Koreans and Koreans around the world are free is 100 percent because of the sacrifices of the veterans,” she said.

Kim, who describes herself as “a child of an immigrant family from a war-torn country,” said she wants to collect veterans’ stories before it’s too late.

Her travels have taken her to 180 Korean War memorials including those in all 50 states and U.S. overseas territories. She’s mapped the memorials on a website koreanwarmemorials.com.

Kim estimates she has met 1,200 veterans.

“They’re extremely proud but at the same time they hope the entire peninsula would be free and the Korean people united,” she said.

She’s traveled to all of the countries that participated in the war including Russia, China and North Korea.

“What’s important is to honor the veterans and remember them,” she said.

Stories about veterans focus on the past but the Korean War has never ended, she said.

Hostilities ended in an armistice signed by the combatants in July 27, 1953, but there has never been a formal peace treaty.

“Every veteran knows they were called to service or they volunteered for the cause of freedom,” she said. “Every veteran will tell you war should never happen, and we need to work harder for peace.”

“She’s a very personable young lady,” he said in a recent telephone interview. “Her heart is in the right place. She has a very strong feeling for Korean War vets.”

Soon after she started in his office, Kim approached Rangel, seeking help working with other veterans.

“She hoped she could spend some time working with Korean veterans,” he said in a telephone interview June 4. “That was exciting for me because you could never do enough to thank veterans of the forgotten war.”

Rangel said Kim’s visits to veterans brought them a sense of joy.

“There’s no Korean veteran that I know of that hasn’t found this lady to be a remarkable representative of the love and affection that Korean Americans have for those who sacrificed themselves in the Korean War,” he said.

Big events had been planned for the war’s 70th anniversary on Friday but the coronavirus stopped that from happening. That’s sad for the veterans, Kim said.

“They are all nearing 90 and many are in quarantine,” she said. “Probably half of the veterans live alone. Their spouses have passed on and they look forward to these gatherings and meeting of old comrades.”

People should use the anniversary of the war to reflect on veterans’ service and continue their legacy, she said.

“We need to still remember to fight for the peace because the war never ended,” she said.