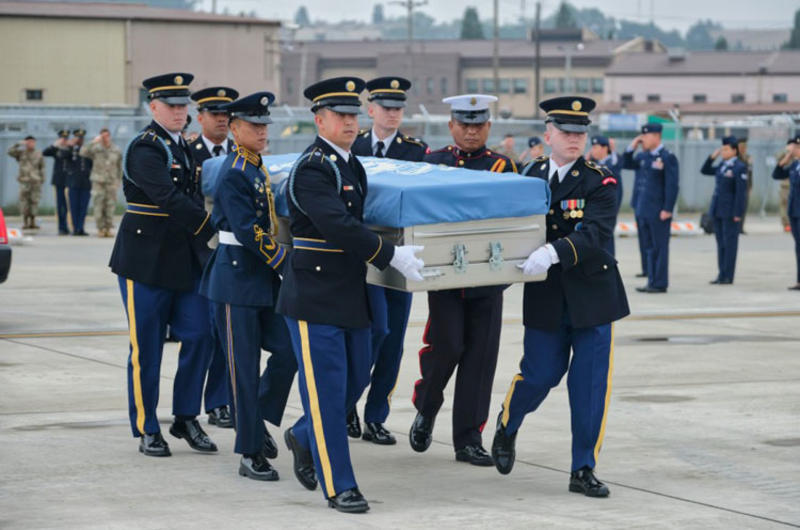 A United Nations Command honor guard carries the remains of six service members killed in the Korean War during a repatriation ceremony at Osan Air Base, South Korea, Friday, June 26, 2020.

By MATTHEW KEELER | Stars and Stripes

OSAN AIR BASE, South Korea — The remains of six service members who fought and died under the United Nations Command during the Korean War left South Korea for Hawaii following a repatriation ceremony Friday at Osan Air Base.

Service members from the United States, the Philippines and Thailand formed the U.N. honor guard that carried the single casket, draped with a U.N. flag, holding all the remains. The casket was loaded onto a chartered Boeing 747 bound for Joint Base Pearl Harbor-Hickam, Hawaii.

Canadian Armed Forces Maj. Susan Magill, a U.N. spokeswoman told Stars and Stripes that authorities are fairly certain the remains are U.S. service members based on where they were found and the battles that took place there. Recovered artifacts were also used in that determination.

Army Gen. Robert Abrams, head of U.N. Command, was among about 50 service members from U.S. and South Korea forces at the quiet ceremony as the six began their journey home after 67 years.

“Although separated from their countrymen, they were never forgotten,” said U.N. Command Chaplain (Col.) David Bowlus during his prayer. “Although once lost, now they are found. May their return bring peace to all who have prayed, and waited, and hoped for this day.”

The flight is expected to make one stop in Japan where the crew will replace the U.N. flag with a U.S. flag before arriving on American soil.

Recovered during searches by South Korea’s Ministry of National Defense Agency for KIA Recovery and Identification, also known as MAKRI, the remains will be received by the Defense POW/MIA Accounting Agency in Hawaii to begin the identification process.

The DPAA reports more than 7,500 U.S. personnel from the Korean War are unaccounted for, with roughly 5,300 of them believed lost in North Korea.

Another repatriation ceremony is scheduled for the service members once they are received in the United States, marking the end of a series of events commemorating the start of the Korean War on June 25, 1950.