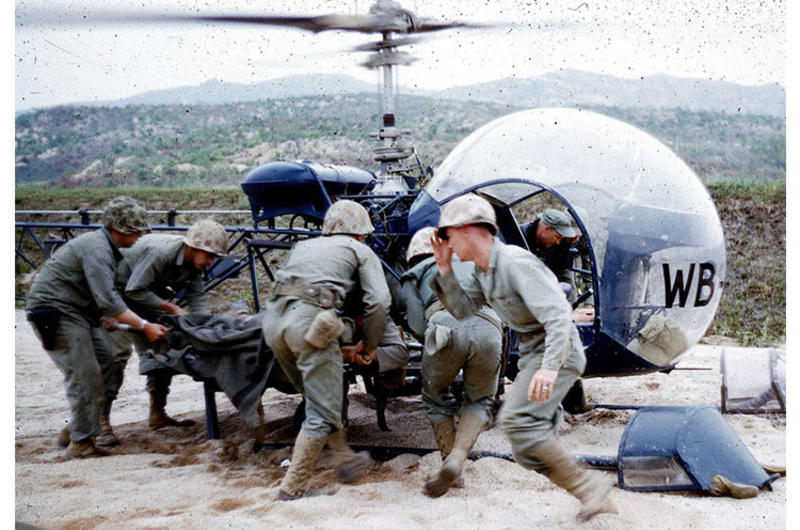 A wounded servicemember is put on a helicopter in Korea in 1952.

By Kim Gamel | Stars and Stripes

SEOUL, South Korea – The Korean War is often called the “Forgotten War” in the United States because the 1950-53 conflict was overshadowed between World War II and Vietnam.

However, the legacy of the stalemated Cold War-era war looms large over the divided peninsula, setting the stage for decades of tensions as North Korea builds up its nuclear arsenal while the United States and China vie for influence in the region.

Just last week, North Korea blew up an inter-Korean liaison office on its side of the border and threatened to redeploy troops that had been withdrawn from the frontier as part of a 2018 military agreement.

That prompted an unusually angry response from South Korea and raised fears of renewed hostilities after the collapse of peace talks and parallel U.S.-North Korean nuclear negotiations.

As the 70th anniversary of the June 25 start of the war approaches, here’s a look at the war and its lasting impact on the Koreas and the United States.

Question: When was the Korean Peninsula divided?

Answer: The former kingdom, which had been occupied by the Japanese from 1910 to 1945, was divided into a communist North and a U.S.-backed South after World War II. Two Army colonels, Dean Rusk and Charles “Tic” Bonesteel, were tasked with drawing a border that would be agreeable to the United States and the Soviet Union. Rusk, who later became a secretary of state, recalled the moment in his memoir, “As I Saw It.”

“Neither Tic nor I was a Korea expert, but it seemed to us that Seoul, the capital, should be in the American sector. We also knew that the U.S. Army opposed an extensive area of occupation,” he wrote. “Using a National Geographic map, we looked just north of Seoul for a convenient dividing line but could not find a natural geographical line. We saw instead the 38th Parallel and decided to recommend that.”

After negotiations aimed at reunifying the peninsula failed, separate countries were established in 1948, with Syngman Rhee elected in U.N.-supervised elections in South Korea and Kim Il Sung taking power in the North.

Q: When did the war start?

A: On June 25, 1950, about 100,000 North Korean troops poured across the border and pushed toward Seoul after Soviet leader Josef Stalin gave Kim Il Sung the green light to invade South Korea and unify the peninsula under communist control. The United States and the Soviet Union had withdrawn most of their troops by the time of the invasion, but the Soviets left the North Koreans far better armed for battle. The ill-equipped South Koreans were caught by surprise and forced to retreat south. The U.N. Security Council approved a U.S. resolution calling for an “immediate cessation of hostilities” and the return of North Korean forces to the 38th Parallel. The Soviet Union missed its chance to veto the resolution because it was boycotting the Security Council over the U.N. refusal to recognize the communist People’s Republic of China as the true Chinese government.

Worried about the spread of communism, President Harry S. Truman ordered U.S. forces to Korea under U.N. auspices within a week of the invasion and appointed Gen. Douglas MacArthur to command the combined forces. Truman didn’t seek a formal declayration of war from Congress, insisting America’s presence on the peninsula was no more than a “police action.” But Congress voted to extend the draft and authorized Truman to call up reservists. “This was the first part of the domino theory,” said Michael Alexander, a retired colonel and the historian for the South Korea-based 2nd Infantry Division. “It was the first hot flash in the Cold War.”

Q: Why did the war last so long?

A: The North Koreans pushed the U.N. forces back to a defensive line on the southeastern tip of the peninsula known as the Pusan Perimeter, but a daring amphibious assault behind enemy lines at Inchon forced the North Koreans to retreat and allowed the allied troops to recapture Seoul in September. MacArthur predicted troops would be home in time for Christmas dinner.

But victory was short-lived after the five-star general decided to make a push north of the 38th Parallel toward the Yalu River, capturing Pyongyang while prompting the Chinese to enter the war in late November as the Americans neared their doorstep.

“We had the war won. MacArthur was right. We would have been home by Christmas. The North Koreans were defeated,” Alexander said in an interview at his office at the military museum on Camp Humphreys.

“But the U.S. over-reached, then China gets involved,” he said. “They overwhelm us with sheer manpower, and they push us all the way back to south of Seoul.”

Mainly U.S. and French forces won a decisive battle in February 1951 at Chipyong-ni, dealing a severe blow to the Chinese and eventually leading to the start of armistice talks in July. But fighting persisted for more than two years amid troubled negotiations.

Q: Why is it called the “Forgotten War”?

A: For one thing, Truman sought to prevent it from becoming a major conflict so he labeled it a “police action.” It also fell between the patriotic fervor of World War II and the first televised war in Vietnam. The murky end result also failed to capture the American public’s imagination since there was no clear victory. The Korean War Veterans Memorial in Washington, D.C., wasn’t finished until 1995. The military also censored much of the media coverage.

Melinda Pash, the author of “In the Shadow of the Greatest Generation: the Americans who Fought the Korean War,” said support for the war was initially high but dropped as the country failed to mobilize. “By the time you get to 1951, when you’re looking at the front pages of newspapers as I did for my book, you’re going to see everything but Korea — the stock market, union strikes, even UFOs,” she said in a telephone interview from her home in Fayetteville, N.C. “It doesn’t affect most Americans.”

Q: What was the damage?

A: More than 36,000 American troops died, according to the Pentagon. 7,580 remain unaccounted for after being lost in the war, with most remains irretrievable in North Korea. Both Koreas were devastated by three years of fighting and estimates of the overall death toll — mostly civilians — range from 3 million to 4 million. North Korea was particularly hard hit by airstrikes, including the use of napalm, which experts say helps explain its hatred of the United States.

A: The fighting officially ended at 10 p.m. July 27 after a U.S. Army general and a North Korean general acting on behalf of Pyongyang and China signed an armistice in lieu of a peace treaty, agreeing to suspend open hostilities and establishing the Demilitarized Zone that divided the peninsula as a buffer between the forces. South Korea’s president refused to sign it in frustration that the peninsula had not been unified, but Seoul has supported the agreement, which stands today.

The United States and South Korea signed a mutual defense treaty two months later, keeping tens of thousands American troops on the divided peninsula. That has led to periods of high tension, but open conflict has not resumed.

“The Korean War is also a great example of how wars don’t stop when the shooting ends,” Pash said. “If you look at relations between China, South Korea, North Korea, Japan and the U.S. today, they continue to be shaped by that long-ago war.”