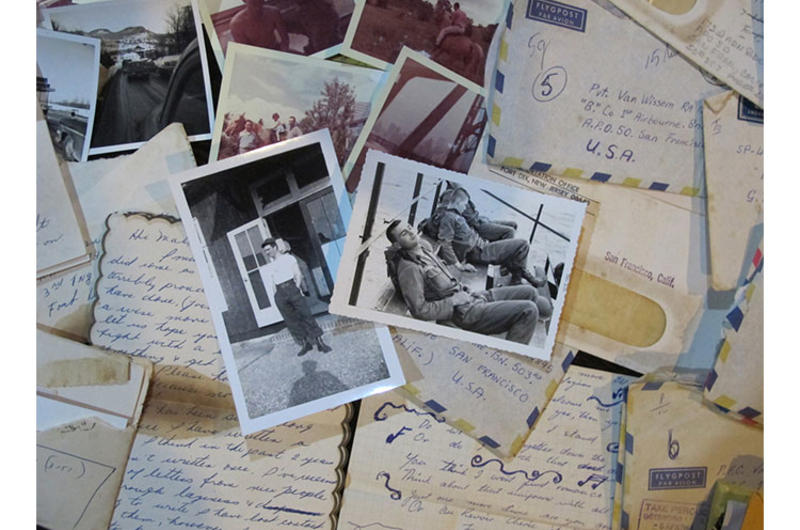 Stacks of photos and letters detailing the youth of Army Pfc. Pierre Mathieu Van Wissem are stacked on the table of retired Marine Mark Simmons at his home in Sasebo, Japan. Simmons took possession of the letters and photos on behalf of Seikichi Tamanaha of Ginowan, Okinawa to try and track down Van Wissem, who died in 2003. Van Wissem asked Tamanaha to hold onto his belongings while he went to Vietnam almost 50 years ago but he never returned. Despite Van Wissem's death, Tamanaha returned the items to his children this month. Van Wissem is seen leaning back on his backpack with his eyes closed.

By Matthew M. Burke and Chiyomi Sumida | Stars and Stripes

After being wounded and deserting from a hospital in Germany, he went on to marry, become a father, divorce and run several businesses in Europe before quietly passing away in France in 2003. His children loved him but thought he was constantly fending off an ever-present shadow from the war.

More than 10 years after his death, they learned new things about his life — thanks to a tenacious elderly Okinawan man.

Van Wissem was stationed in Okinawa, and when he went off to fight in Vietnam, he left behind a treasure trove of photographs, letters and postcards that reveal happier times, before the war.

His children were reunited with the items this month, thanks to Seikichi Tamanaha and his four-decade-old promise to the man who would become their father. Tamanaha never gave up hope of finding Van Wissem or his family to return the items.

The 81-year-old Tamanaha still wears Van Wissem’s faded green military jacket when he does yard work at his home in Ginowan.

“Who would save something for such a long period of time for a stranger?” said Van Wissem’s daughter, Chantal Dortants-Van Wissem, from her home in the Netherlands. “It’s amazing.”

It has been almost 50 years since the balmy day when Van Wissem stopped by Tamanaha’s yard with a favor to ask. The quiet and mild-mannered soldier with the “gentle look on his face” had never spoken with his landlord — and they would never speak again — but that fleeting moment forever linked the two men.

“He asked me to keep two boxes that contained his belongings while he was away,” Tamanaha said recently. “He promised me he’d be back in three months. I had a feeling that he had gone to war.”

It was April 1965 when Van Wissem, then a member of 1st Battalion, 503rd Infantry Regiment, 173d Airborne Brigade, left Okinawa, according to military records and the 1964 1/503rd Yearbook. The records don’t say where he was headed, and there is gap of a couple of months in his service record.

The U.S. had just officially entered into the war with Vietnam with the Tonkin Gulf Resolution a few months earlier. Japan was quickly becoming a launch pad for forces heading to southeast Asia.

Members of the 1/503rd at the time recalled advanced parties being flown into Vietnam on May 4 and the rest of the brigade deploying the next day.

The 1/503rd deployed to Vung Tau, and the rest of the brigade deployed to Bien Hoa, according to Craig Ford of 1/503rd’s Charlie Company. It took several days to fly everyone in. Some of the support troops traveled by boat.

Ford said that they were on temporary duty of 90-120 days, which could be why Van Wissem thought he would be returning to Okinawa. But the unit was permanently reassigned to Vietnam.

After Van Wissem left Okinawa, Tamanaha went to the home down the street from his own that he had rented to Van Wissem and several other American soldiers. There, in Van Wissem’s meticulous room, he found two boxes, each about 5 feet long, 2 feet wide and 2 feet tall. They were tightly covered and nailed shut.

Tamanaha lugged the boxes to his home and put them deep in his closet for safe keeping, never telling his family about them, he said. Then he watched as days turned into months, and months turned into years.

“After he left Okinawa, I was told that he was with a parachute squadron and that not many troops survived,” Tamanaha said. “So I have been wondering all these years.”

After about six years, Tamanaha told the housing agent for his apartment about the boxes. Curiosity got the better of the two men, and they decided to take a peek.

Inside, they found a military uniform and jacket, a sleeping bag, a half-dozen surgical scissors, safety pins, neatly wrapped razor blades, as well as a bundle of photographs, negatives and letters.

It was the little things that had endeared Van Wissem to his Japanese landlord even though they barely knew each other. There was something about the gentle nature of his face, his sincerity and the meticulous way he cleaned his room before he left and stored his belongings.

“We hardly talked, but my impression about him is proven, I think, in the way he kept his personal belongings in the boxes,” he said. “I could tell he was a thorough and conscientious person.”

Sensing Van Wissem might not come back, Tamanaha gave away some of the clothing, the sleeping bag and other items but could not bring himself to dispose of the photos and letters.

“I decided to keep them for him because I know how much they meant to him,” he said. “All these years, I had some hope that he would come back one of these days to pick them up.”

Hope faded with each passing year, especially the last 10, Tamanaha said. Holding these precious items weighed on him, until he finally decided to enlist some help.

A few years ago, the silver-haired Japanese grandfather passed the photos to his daughter, Naoko, who passed them to her friend, Meiko Simmons, hoping that her Marine husband, retired Staff Sgt. Mark Simmons, could help track down Van Wissem. Naoko said the photos and letters seemed like unfinished homework to her father.

Simmons retired from the Corps after 22 years in 1993 but lived and worked on Okinawa off and on from about 1972 to 2006 and lives today at Sasebo Naval Base, where he works in the environmental department. Wherever Simmons went, the photos and letters went with him.

“It’s history; it’s the past; if it were me, I’d want them back,” Simmons said of the letters. Tamanaha “thought because I was in the service, I could track him down and give him his stuff back ... I thought it would be an interesting project.”

The piles of letters are mostly from young women from around the world as well as from Van Wissem’s family in Maastricht, the Netherlands. They depict a charmer who could be brash sometimes and displayed a temper but loved women, a good drink and steak dinners. He joined the military in 1963 because he had gone to Canada and then to America in search of good-paying jobs.

“I want you to know that I will never forget you, especially when I look at my ring that you gave me,” wrote a woman from Montreal. “Give my regards to your buddies and say that you also have a girl waiting for you on the other side of the ocean,” wrote another from Sweden.

The photos were taken all over the world, from France to Montreal to Atlanta.

Simmons paid for online services that track people down, but too many names came up. He tried to get Van Wissem’s military records but hit another wall.

“I didn’t think it would be as difficult as it was,” he said. “I just kept running into dead ends, so I just gave up.”

That’s when National Personnel Records Center management analyst Niels Zussblatt got involved and delivered bad news: He found a Dutch obituary online for Van Wissem, who died in 2003. However, he also found a lead on Van Wissem’s children, living in the Netherlands. “It was sad to learn that he had already gone, but yet I was very happy to hear that he was survived by his children,” Tamanaha said. “He survived the war, went home and had his own family. Learning about this made me very happy.”

To Van Wissem’s children — daughter Dortants-Van Wissem and son Janneau Van Wissem — their father had always been an enigma. He lived in the Netherlands most of his life and was a successful businessman. But he never talked about his past and was often emotionally disconnected. Although he always put his children first, he suffered bouts of depression and rage.

From what they have put together from things he left behind, letters from the Defense Department and hints he dropped over the years, they think he went to Vietnam but was wounded soon after arriving. While recovering in Germany, he deserted.

The war was a cloud that followed him for the rest of his life.

“It left a mark on his soul,” Janneau said.

“His decisions afterward were always influenced by what he saw or did in Vietnam, we think,” Chantal Dortants-Van Wissem said. “He never told us. Mother always told us that is why he was depressed.”

The letters showed that he wasn’t always “grumpy.”

At one time, he was that young, sincere, soldier with the gentle face, mugging for the camera next to a beautiful woman.

After helping the Van Wissem children to better understand their father more than 10 years after his death, from halfway around the world, Tamanaha’s work is done.

“I feel like I had a longtime weight finally lifted off my chest.”