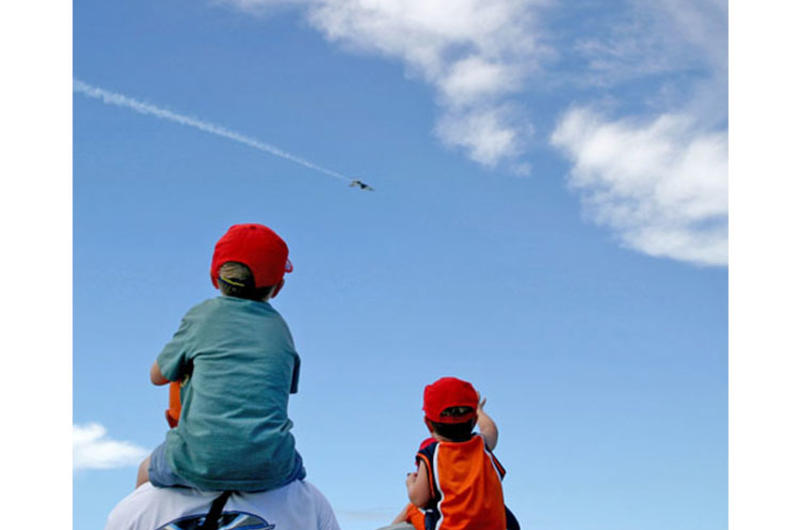 Hayden Froehlich, 5, left, was among the children using the shoulders of adult friends and parents to get a bird's-eye view of the Thunderbirds practice show on Saturday. Providing Hayden's perch was his dad, Maj. Eric Froehlich.

By Frank Whitman | Special to Stars and Stripes

ANDERSEN AIR FORCE BASE, Guam — The Air Force Thunderbirds hosted children from the Make-A-Wish Foundation, Guam Special Olympics and the Autism Parent Support Group during a practice session Saturday, the day before the aerial demonstration team performed at an open house here.

“This is great — his eyes were glued to the whole thing,” said David Dell’Isola of his 6-year-old son, Mark.

Mark beamed as he clutched the Thunderbird delta-formation pin that just had been pinned on his shirt by Capt. Steven Rolenc, Thunderbird public affairs officer.

The Dell’Isolas are part of the autism support group.

“We wouldn’t have been able to come to the show tomorrow,” Dell’Isola said, adding that his son “couldn’t handle the crowds. I’m really grateful to the Air Force for doing this.”

Thunderbird team members said they find interacting with the children a rewarding part of their tours.

“Just to put a smile on their faces and bring some happiness to their lives, this is a a special thing for us,” said Lt. Col. Michael Chandler, Thunderbird commander. “It’s something we don’t take for granted because we enjoy that part of the job, we really do.”

About 40 children and their families gasped, applauded, cheered and smiled as the Thunderbirds put on their usual display of impeccable precision flying.

Following the performance, pilots and other team members mingled with the children, distributing souvenirs, signing autographs and answering questions.

“It was good,” said 10-year-old Ezra Somerfleck, also with the autism group. “All planes are my favorite.”

The practice performance was preceded by a re-enlistment ceremony. The children were invited to join the audience as Chandler officiated, re-enlisting 13 airmen on the flight line beside his jet.

Among those re-enlisting was Tech Sgt. Leslie Sukup. The Michigan native initially enlisted in 1993 at a similar ceremony officiated by the Thunderbirds during an air show at now-defunct Wurtsmith Air Force Base, Mich.

Andersen spokeswoman Maj. Kris Meyle said more than 26,000 people attended Sunday’s open house, the first time the base had been opened to the public since heightened security was instituted following the Sept. 11, 2001, terror attacks on the United States.

Guam was the first stop on the team’s 2004 Pacific tour. The team is to perform next in South Korea, at Kunsan Air Base on Sept. 17 and Osan Air Base two days later.

A Sept. 15 show scheduled for Kadena Air Base was canceled to honor “local sensibilities,” in the wake of an Aug. 13 helicopter crash on Okinawa.

The team moves on to Japan to perform at Hyakuri, Misawa and Hamamatsu bases on Sept. 26 and 30 and Oct. 3. The Japan tour coincides with the 50th anniversary of the Japan Air Self-Defense Force.

“So we’re happy to return the favor and be a part of their history,” he said. “It shows our joint commitment to defending freedom.”