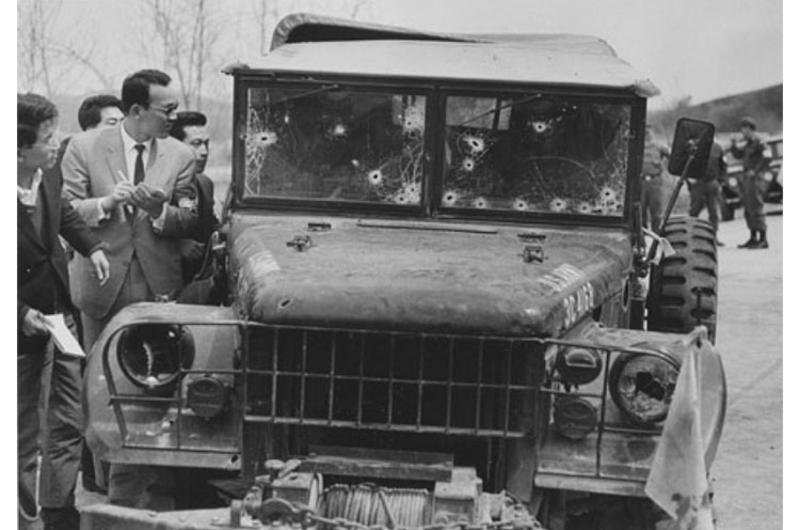 The bullet-riddled truck in which four United Nations Command soldiers — two Americans and two South Koreans — were killed in an ambush at the Korean DMZ in April, 1968.

ALONG THE DMZ, Korea — Observers at the scene of Sunday night's bold ambush by Communist North Koreans who machine-gunned and killed four United Nations Command soldiers reached one conclusion: "I don't see how anybody survived this."

About 20 bullet holes could be seen in the shattered front windshield of the truck. Both headlights were blasted out. Three of the tires were punctured and at least 40 rounds had ripped through the truck's rear canvas cover. Two UNC troops survived the attack, but were wounded.

A pool of dried blood, a severed wristwatch, glass fragments and discarded bandage wrappers were scattered around the ground near the truck.

A U.S. Army spokesman said parts of a Soviet fragmentation grenade were found.

Engle had arrived here to meet with a North Korean delegation at 6 a.m. Monday to investigate the ambush, but the Communists failed to show up. They had been asked by Rear Adm. J. V. Smith, UNC senior member of the Military Armistice Commission, to participate in a Joint Observer Team (JOT) investigation.

Praeger, one of the first U.S. officials to arrive at the scene, shortly after 11 p.m. Sunday, said about 200 rounds of machine-gun fire came from both sides of the dirt road.

The three-quarter-ton truck, lights on and flying a white flag in accordance with armistice rules, carried three men in the cab and three others in the back under cover of the canvas top, according to Praeger.

The UNC guards were carrying .45-cal. pistols but it was not known whether they returned any shots, Praeger said.

The dead and injured were taken by helicopter to the 121st Evac. Hospital in ASCOM after the ambush.

The truck and guards were from the support element at the Advance Camp, not from the 2nd Inf. Div. as previously reported.