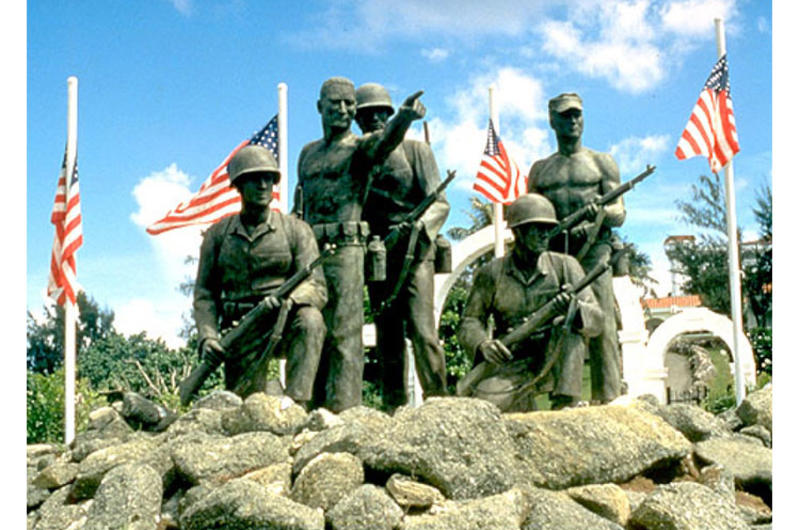 A memorial recognizes American troops who liberated Guam from the Japanese occupation in 1944.

By Norman Sklarewitz | Special to Stars and Stripes

Along the Normandy coast this June, ex-GIs, French and U.S. dignitaries and ordinary French citizens will gather to mark the 60th anniversary of the D-Day landing. The event is certain to come in for plenty of attention as network TV crews and the international press cover the moving ceremonies.

But halfway around the world a few weeks later, a similar event will take place but probably with far less attention from the outside world. This is when the Chamorro people of Guam mark their liberation from a bitter Japanese occupation 60 years ago. The precise date was July 21, 1944.

That’s when the U.S. Third Marine Division stormed ashore and after weeks of bloody, often hand-to-hand, fighting, defeated the Japanese. In the process they freed Chamorro civilians being brutalized in concentration camps and saved many from being summarily executed. So, as they do every July 21, the people of Guam again will mark their Liberation Day.

There probably is no other place in the world where the U.S. military — past and present — is afforded so much respect. Currently before the Guam legislature is a bill authorizing the name of the island’s main Highway One, already known as Marine Drive, to be changed to Marine Corps Drive.

Explains one resident, “When the road was first built during World War II, it was named for the Marines and everyone knew that. But the younger generation of Guamanians may mistakenly assume the highway’s name refers to something to do with the ocean. We don’t want anyone to forget what the U.S. Marines did for us.” Hence the name change. Guam’s 45-year- old Gov. Felix P. Camacho said he’ll sign the measure into law the minute it hits his desk.

Everywhere you turn on Guam are poignant reminders of its role in WWII. The U.S. Department of the Interior has designated some 2,000 acres above the Asan invasion beachfront as The War in the Pacific National Historical Park. On a bluff overlooking the rugged terrain that the Marines faced as they fought their way ashore stands the Pacific War Memorial.

It includes a curved wall with mounted bronze plates on which are inscribed the names of the 1,548 Marines killed in action during the bloody campaign. On companion panels are the names of Chamorros who also died in the fighting.

From interpretive panels containing combat photos and diagrams, visitors can look down from what were the defensive positions held by the Japanese and only imagine what courage and skill were required by the Marines to assault and take the strategic hill.

Down from the hill are caves which were used by the Japanese command and, in fact, throughout Guam are similar positions as well as coastal artillery and anti-aircraft pieces. John Gerber, a local businessman who was a U.S. Marine in Vietnam, plans to establish a WWII Military Museum at his own expense. Already he’s accumulated a large collection of U.S. vehicles from the war — an armored personnel carrier, trucks, staff cars and an amphibious landing craft along with Japanese rifles, helmets and other military gear.

All these reminders of WWII and its military installations are, however important, just a small part of what Guam is all about these days. It has evolved into one of the prime tropical tourist destinations in the western Pacific.

For Asians it provides an opportunity to have a holiday in a nearby part of the United States that also offers just about every kind of tropical holiday diversion plus duty-free shopping. The income from tourism now accounts for some $2 billion a year, some 60 percent of the island’s entire economy, up from no more than 30 percent a few years ago. In one record year, some 1.4 million visitors came to the island.

Because of the sluggish Japanese economy, visitor arrivals are down some. Still it’s expected that about 1.1 million visitors will come to Guam this year. Almost 84 percent of arriving tourists are Japanese with another 10 percent coming from Korea and the rest coming from Taiwan, the Philippines, the United Staets and even Hong Kong.

But Alberto Lamorena, general manager of the Guam Visitors Bureau, wants U.S. military personnel and dependents serving throughout Asia to know that the welcome mat is always out for them. “We’re under four hours flying time from Korea, Okinawa and Japan’s main islands,” he points out, “and we offer just about everything desired for a tropical R&R.” Families are also coming from the mainland to visit their sons, daughters and spouses serving in Guam, notes Lamorena.

The tourism community on Guam is supportive of American fighting forces. The fine golf courses around the island give active duty military men and women substantial discounts. The Alte Guam Golf course, for example charges tourists $110 for 18 holes of play on weekdays or $150 on weekends. But by showing their ID cards, members of the armed forces play for $40 seven days a week. The Hilton Guam Resort & Spa offers military personnel 20 percent off food and beverages and has a government rate of $135 per night, compared to the standard rate of $215.

During the Cold War and into the Vietnam War, Guam was essentially a military base. In fact, until 1962, an outsider had to get special security clearance from the U.S. Navy to enter Guam. When that restriction was finally lifted, Guam’s natural beauty, its low- key lifestyle, friendly people and quality accommodations combined to attract visitors in ever increasing numbers. They aren’t disappointed.

The entire island is ringed by coral reefs that create calm lagoons of turquoise water between their crashing waves and the sand beaches. These lagoons provide a safe venue for all sorts of recreational water sports. Available on the beaches from hotel concessionaires are kayaks, wind surfers, outrigger canoes, banana boats, jet skis, water skis, parasailing rides, snorkeling equipment and the latest — kite surfing. Pole and net fishing from the shore are also permitted.

For the more adventurous, it’s easy to venture farther out and under the water. That’s because Guam is famous in SCUBA diving circles. A variety of dive shops offer instruction leading to PADI certification, rent and sell equipment and, of course, provide facilities for a variety of dive experiences.

“Guam is one of the top 10 diving locations in the world,” says Paula Bent, an Australian who with her husband John, owns and operates the Guam Tropical Dive Station. “The visibility is also better than in most places in the world. You can see 150 feet and the waters are warm.” Close off shore or even in the harbors are submerged wrecks. “In many dive areas in the Caribbean or elsewhere, you have to go out for an hour or 90 minutes to reach a good location. Here in 30 or 45 minutes you’re at the edge of the Marianas Trench, the deepest point on the planet.”

From spots such as the Agana Marina, charter boat skippers like Gie Clark, formerly from Florida, are available to take visitors out for serious deep sea fishing. Only on Guam, going after wahoo, maiko, yellow fin tuna and even blue marlin doesn’t require an all- day trip. “We put our lines into the water a mile or two out,” says Clark. “Back on the mainland, you sometimes need to go 40 or 50 miles out to reach deep water. Not here.” As one result, he makes two or three three-hour fishing excursions aboard his 31-foot Shamrock boat every day.

Actively in the works now, too, are efforts to bring gaming to Guam. An initiative is now “in place,” according to David B. Tydingco, president of the Guam Hotel & Restaurant Association who is also chairman of the board of the Guam Visitors Bureau. The measure calls for a direct vote of the people on Nov. 2. If approved, up to 10 licenses for casino operations can be authorized 18 months later, but initially only two or three are expected to be issued.

Gaming will be restricted to hotels and many are expected to convert existing space to accommodate their planned casinos or add on to their structures. Says Tydingco, “If approved, resort gaming will provide for diversification of our tourism product and expand our visitor base.” Prospects for passage of the initiative “look good,” Tydingco says.

Guam is so compact that a visitor can easily tour the entire island by rental car in a day, seeking out and finding as much or as little action as she or he might want. In no more than 20 minutes or so you can go from the bustling Tumon Bay area with its luxury hotels, upscale shops and restaurants and be at the Guam National Wildlife Refuge, Ritidian Unit, at the northern tip of the island.

Here beneath a towering limestone cliff is a dense, tropical jungle that extends down to a narrow sand beach. The coral reef at this point is just a matter of a few yards off shore. Hike back into the limestone cliff area and ancient pictographs cut into the rocks are to be found. A narrow dirt road provides access into the park but hiking trails provide an opportunity to immerse yourself into a verdant world of ferns, plants, palms and other lush tropical growth.

It’s almost a perfect definition of what it means to “get away from it all – Guam style.”

While still very much a major U.S. military asset in the western Pacific, installations on Guam in recent years have experienced major cutbacks. However, things quite recently have started to turn around.

Early this year, at Andersen Air Force Base the 36th Air Expeditionary Wing came into being. About 300 support staff and aircraft ground crews for it began to arrive from the mainland. Then, in mid-February, a detachment of six B-52H bombers from Minot AFB arrived at AAFB to begin training operations for an open-ended commitment.

Now under construction at Andersen, is a $35.5 million dollar hangar designed primarily to accommodate the B-2 Stealth bomber. The hangar is climate controlled, and designed to withstand typhoon force winds. Pre-positioned as well at AAFB now are 3,000 pound air-launched cruise missiles. There’s talk in military circles that the new F/A-22 Raptor stealth fighters, the unmanned Global Hawk and KC-135 aerial tankers might be stationed at AAFB. Also at Andersen is Navy Helicopter Combat Squadron 5. In addition to search and rescue and medical evacuation missions, it provides support to special operations.

At the other end of the island, things are also stirring at the Naval Forces Marianas Support Activity. Home ported there at the present time are the submarine tender USS Frank Cable and two Los Angeles- class fast attack submarines — the USS San Francisco and the USS City of Corpus Christi that make up Submarine Squadron 15. Joining the squadron there soon will be a third sub, the USS Houston. Also in Guam are five supply ships and eight pre-positioned material ships, which are set to increase to 13 pre-positioned material ships in 2008. Navy shore commands on island include the Naval Hospital and the Naval Computer & Telecommunications Station.